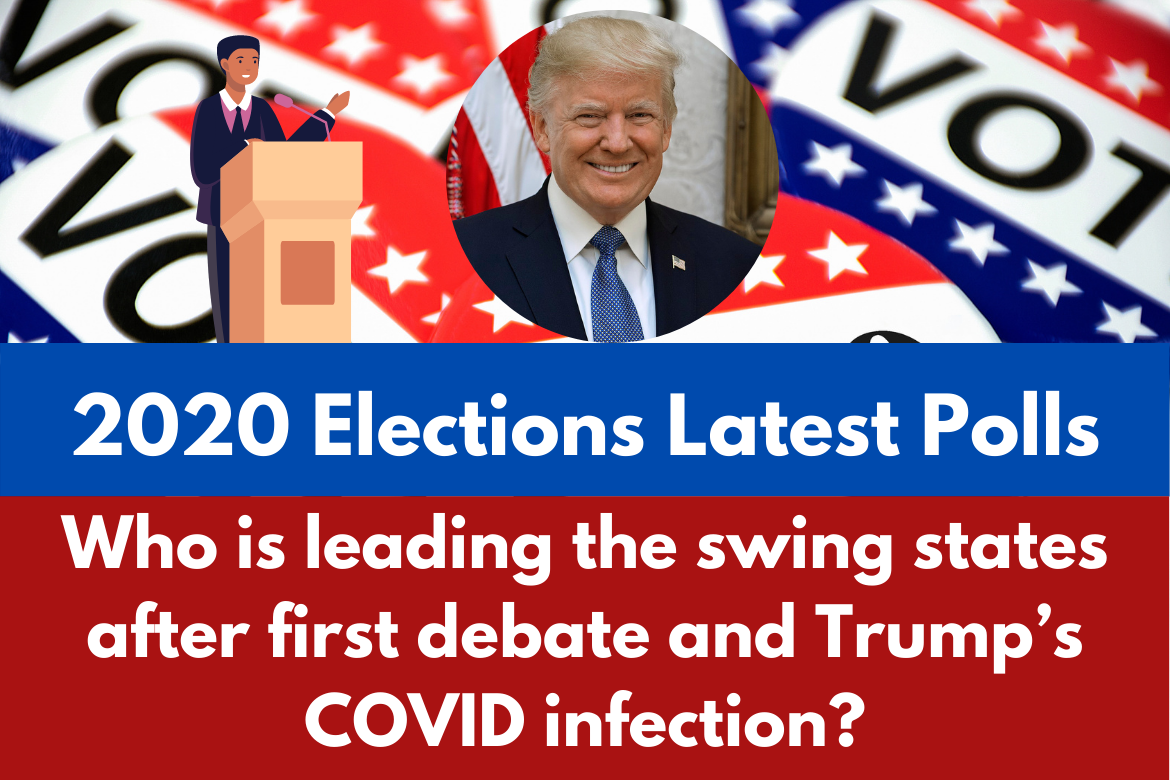 Amid one of the most anticipated polls of 2020, the swing states are gaining importance every passing day. The latest polls after the first presidential debate are out, and Biden has managed to increase his popularity nationwide. According to the polls, Biden leads Trump by 16 points, as 57 percent of voters sided with Biden compared to 41 percent with Trump.

The polls are mostly driven by the swing states. While Republicans are expected to win the red states, including Idaho, Wyoming, the Dakotas, Montana, Utah, Kansas, Oklahoma, and Nebraska along with most of the Southern states, Democrats will probably win the blue states of California, Washington, Oregon, Hawaii, New Jersey, and New York. With all of this happening, all eyes are on swing states, and with every passing day, swing voters are showing favorable results for the Democrats. Let’s see how these states are changing over time with less than a month left in the elections. Eight swing states that can decide the next president:

The following eight states with 126 total electoral votes are must-win for anyone seeking the White House for the next four years. Remember, the Republicans won all of these states in the 2016 elections.

Joe Biden Vs. Trump: Who is leading the swing states?

Republicans won Florida in the 2016 elections

Winning Florida is the utmost priority of both the presidential nominees as these 29 important votes can be crucial. The changing trends in Florida over time can be seen here. Both nominees are neck and neck, with just over a two percent difference in the polls. A highly contested election is guaranteed, and this can be the swing state to watch on November 3.

Republicans won Pennsylvania in the 2016 elections

The difference is increasing as Biden leads the state by nearly five percentage points. However, it is still lower than  Biden’s overall lead of sixteen percent as Trump can make a comeback if he does better in the second presidential debate.

Republicans won Ohio in the 2016 elections

Another closely contested state having eighteen electoral votes is almost guaranteed to be one of the close calls for the November 3 election. After the first Presidential debate, there is only a difference of 0.4% between both the candidates.

Republicans won Michigan in the 2016 elections

With sixteen electoral votes available, Biden is currently leading Michigan by almost seven points. Although it is a big difference, with 7.6% undecided voters, Republicans can make a comeback as Trump is all set to start his campaign again after his premature discharge from the hospital as he caught COVID.

The state of North Carolina is bound to have a nail-biting contest on November 3, considering the fact that the current difference in polls is just 1.4 percent. With the state having almost 7.6% undecided voters, both candidates will surely try to convince them in the next presidential debate on October 15, 2020

Republicans won Arizona in the 2016 elections

A state that has never voted for Democrats since 1996 is showing promising results this time for them. Surprisingly, the polls turned out to be in favor of Trump after the debate and COVID fiasco. However, as of now, the Democrats are leading by nearly 2.5 points. Many people here are also showing an inclination towards independents.

Republicans won Wisconsin in the 2016 elections

This swing state is showing favorable results for Biden after the debate and Trump’s COVID diagnosis. The gap is increasing, and Biden is making his lead strong. But, with nearly eight percent undecided voters, Trump will try his best to win the ten electoral votes of Wisconsin.

Republicans won Iowa in the 2016 elections

The only swing state which is currently led by Trump is Iowa. However, the lead is very small, and a close contest is expected on November 3.

With all the polls coming out from the swing states, Biden will be more than happy seeing the effects of the debate on the voters. Most of the voters in these swing states are going towards Biden after the debate. Not only this, but some of the voters also attributed Trump’s behavior as irresponsible while handling the COVID-19 pandemic.

Similarly, some people in these swing states opined that Trump’s exposure to the virus resulted due to his negligence and that the president is not following the protocols of the virus seriously. With all of this happening, a close contest is guaranteed in all of these states, and Trump has to work hard in the upcoming debates to get a favorable result in these swing states, as all of them were won by Republicans in the 2016 Presidential elections.