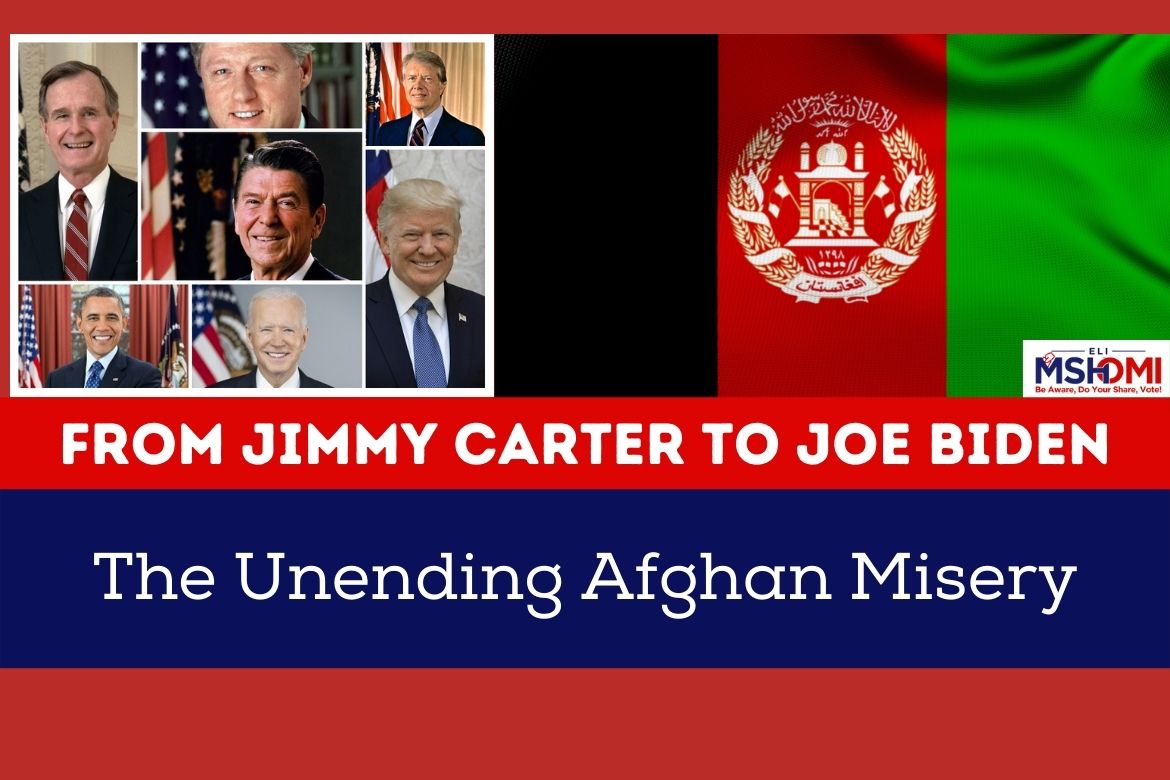 The misery that kicked off with the onslaught of the Cold War has finally concluded, at least for the time being. The Afghan war started with an internal battle in Afghanistan in 1978, between anti-communist Islamic insurgents and the Afghan communist government, supported by the Soviet Union.

Due to the former Soviet Union’s engagement in the war, the US involvement became essential, as the two superpowers came face to face in battlegrounds across the world.

Since then, bloodshed and fanaticism have continued unabated, and the region remains volatile.

During the 1970s, the United States was watching the situation in Afghanistan closely, trying to gain a foothold there.

As the country was under Soviet influence, the US began slowly funneling money towards anti-Marxist resistance groups.

Since the Soviet Union invaded Afghanistan in 1979, the United States has been directly involved in the region except for a brief period of time.

The US was either supporting the mujahideen against the Soviet Union or fighting directly against the Taliban after the September 11 attacks.

Following the collapse of the Soviet Union, American interest in Afghanistan began to diminish, and the US left behind a well-armed and motivated extremist group in this whirlpool; Osama bin Laden was one of them.

The United States’ involvement in Afghanistan began under Jimmy Carter and continued until President Biden.

Jimmy Carter: Taking on the USSR Face to Face

Jimmy Carter approved collaboration between the CIA and Pakistan’s Inter-Services Intelligence before the invasion of Afghanistan. To respond to this cooperation, the CIA provided $500,000 of non-lethal assistance to the mujahideen.

Carter reacted vigorously following the invasion in December 1979. He authorized Operation Cyclone and began supplying weapons and money to the mujahedeen through the Pakistan army.

He believed the provocation was dangerous. He imposed sanctions against the Soviet Union, guaranteed renewed help to Pakistan, and pledged the United States’ commitment to the Persian Gulf’s defense. Carter also urged a boycott of the 1980 Moscow Summer Olympics in his anti-Russian bid.

The CIA’s covert Operation Cyclone was the longest and most expensive engagement in history. The United States funneled more than $20 billion into Afghanistan to train and arm resistance groups.

To implement this policy, Reagan sent CIA paramilitary operatives to arm mujahideen forces against the Soviets. It aimed at assisting the rebels in their war against the Soviets by providing weapons, tactics, logistics, and training programs.

In 1983, at the White House, President Ronald Reagan met with mujahideen leaders, whom he referred to as “freedom fighters.” Little did he know back then that the same freedom fighters would bring down the twin towers in 2001.

US forces armed the mujahideen with anti-aircraft Stinger missiles in 1986.  Stringer missiles changed the entire war scenario, and the Soviet Union began negotiating its withdrawal.

Under Reagan, the CIA sent billions of dollars to Afghanistan. This strategy was successful in driving out the Soviets.

George H.W. Bush: USSR had Fallen, so Did the US Ambitions

With the collapse of the USSR, America had little interest in the region. However, even under President George H.W. Bush, the United States provided financial assistance to the region. The US spent $4.2 billion on assistance between 1987 and 1993.

Bush stated that the United States would continue to help the Afghan rebels as long as their efforts resulted in a stable government.

An accelerated effort to end the Afghanistan war led Bush to send a delegation to South Asia on January 14, 1990.

This was a significant shift in US policy, as it started changing the course of its support for the mujahideen.

Bill Clinton: The Beginning of US Long-term Involvement in the Region

During Bill Clinton’s presidency, the CIA established that bin Laden was not just a Taliban financier but also the head of an operation based in Afghanistan.

Because he was urging Muslims to kill Americans, the State Department asked the Taliban to evict bin Laden from the nation. In response, the Taliban claimed not to know his location and declined the request.

Later, the CIA prepared a plan to capture and remove bin Laden from the nation, but General Anthony Zinni and a few others in the State Department rejected the notion.

An attack on US embassies in Kenya and Tanzania was carried out by terrorists in August 1998. Twelve Americans were among the 250 dead and 5,500 injured. Clinton ordered missile strikes after intelligence linked the bombings to Osama bin Laden, a Saudi Arabian living in Afghanistan and suspected of terrorist activity.

In the aftermath of the 9/11 attacks, President George W Bush issued an ultimatum to Taliban leader Mullah Mohammed Omar; either hand over bin Laden and other terrorists involved or prepare for war.

After the Taliban administration rejected the war warnings, Operation Enduring Freedom was launched in Afghanistan on October 7, 2001. Less than a month after the September 11 attacks, this invasion was conducted with the aim of destroying al-Qaeda and defeating the Taliban.

Bush targeted the terrorists’ finances, boosted homeland security funds, and provided Afghan refugees with humanitarian assistance in order to drive out the Taliban from Afghanistan.

The Bonn Agreement was signed on December 5, 2001, giving power to warlords who had ruled from 1992 to 1996, as well as key players in the Northern Alliance. In the same month, the US-backed Hamid Karzai became the caretaker president of Afghanistan.

Following the defeat of Al Qaeda and the Taliban in Afghanistan in 2002, Bush called for a Marshall Plan to rebuild Afghanistan.

President Bush announced, “Mission accomplished,” in May 2003, and the Pentagon declared major combat in Afghanistan over.

After taking office, President Barack Obama ordered a reinforcement of US soldiers in 2009. In Afghanistan, more than 30,000 troops had been deployed to combat radicals.

In his message to the nation, he stated that these forces would only be in position for a short time and that their primary goal was to give Afghans time to build their capabilities and protect their own future.

This was the beginning of the new era of US involvement in the region, which would continue for more than ten years.

The one major goal that was achieved in this war on terror came after ten years. In May 2011, Obama announced that Osama bin Laden, the mastermind behind 9/11, had been executed by US military and CIA personnel.

By 2012, the government withdrew 33,000 “surge” troops with the intention of returning all security duties to Afghanistan by 2014 and completing the withdrawal by 2016. The withdrawal did not occur before Obama’s term ended in 2017.

Obama’s era was characterized by the reckless bombardment of Afghanistan and Pakistan with the help of drones.

US drone attacks in Pakistan and Afghanistan, which began under President George W. Bush, had grown significantly after President Barack Obama authorized an expansion of the attacks in 2009. Several civilians, rescuers, and even American citizens have been killed by drones.

Obama was criticized for drone attacks and for what many humanitarian organizations called extrajudicial killings.

Donald Trump: From Arms to Table

In 2017, former President Donald Trump warned against a hurried withdrawal from Afghanistan.

In addition, Trump enlarged the US military’s involvement in Afghanistan and increased airstrikes, including the use of the world’s largest non-nuclear bomb against ISIS fighters.

The Taliban were gaining ground in Afghanistan by then, controlling more than 60% of the nation, despite seventeen years of conflict in Afghanistan.

Finally, the United States decided to try to end the long war by initiating peace talks with the Taliban.

The Taliban and the US agreed that the remaining 13,000 troops in Afghanistan would be evacuated by May 1, 2021. In doing so, the group would cut ties with al-Qaida and cease attacking American forces.

By the end of Trump’s presidency, the number of US troops in Afghanistan had decreased to 2,500.

When Biden was vice president in the Obama administration, he believed that adding troops to Afghanistan was the best way to win in Afghanistan. But in his capacity as president, he announced that the US would completely withdraw its troops before September 11, 2021.

During his speech in April 2021, President Biden said that he is now the fourth president to oversee American troops in Afghanistan, but the fifth president will not be burdened by this responsibility.

By July 2021, the United States withdrew the majority of its troops from Bagram Airbase in Afghanistan without informing the new Afghan commander, allowing the Taliban to attack Afghan security forces.

Just as after the cold war, this time, America has once again left modern-day weaponry to the Taliban, which could prove to be detrimental.

Despite the twenty years of war, when President Biden announced a complete withdrawal, Kabul fell to the Taliban in a matter of days.

It was highly anticipated, however. Because of the way the evacuation happened, there was no hope of a peaceful transition at all.

The Taliban wants the country in its entirety, which is against US interests. The American approach is widely criticized both home and abroad, considering that all the NATO forces were in this together, but the US did not incorporate any ally’s concern in making withdrawal decisions.

It is a common perception that Biden could have escaped the country with a better approach, without any loss of life or property.