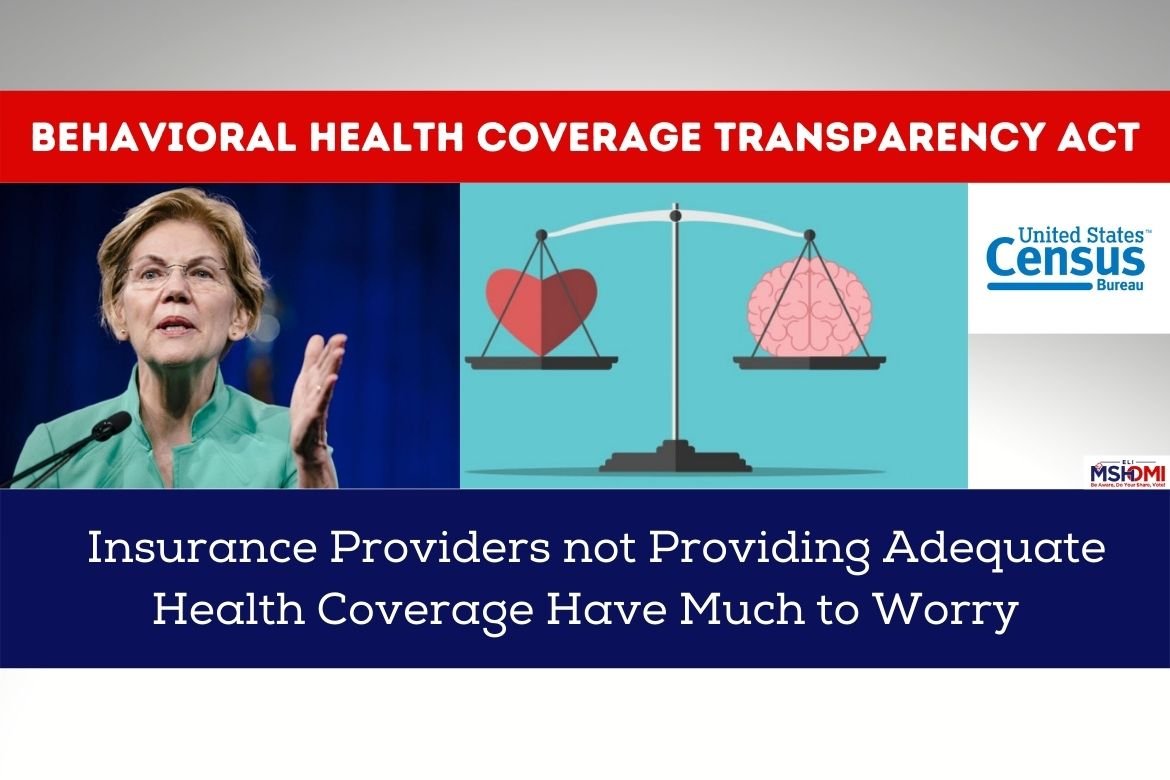 Ignoring mental health has had disastrous consequences on not only the patients’ lives but also their families, as it often results in suicide.

The pandemic outbreak has even intensified these issues, where depression and anxiety have taken the mental health problem to a new high.

Substance abuse has also been increased, all of which demand immediate attention and assistance from lawmakers.

Falling into addiction is not difficult at all, and many people tend to be trapped in this endless loop when they fail to get proper guidance.

Despite the fact that federal laws bind insurance providers to cover mental health in all insurance programs, the absence of the rule of law is helping insurance companies save big money while mental health patients are continually denied treatment.

The Behavioral Health Coverage Transparency Act, sponsored by Senator Elizabeth Warren, is a way to enhance the existing laws so that the insurance providers must stop evading the system.

Anyone can fall into addiction, especially in a country like the United States. The widespread penetration of technology has provided smartphones into the hands of everyone, and the uncontrolled use of social media is disastrous for feeding addictions, and hence the rise of mental health problems.

Mandating and enforcing all health insurance service providers to provide mental health coverage is the only way in the long run to save mental health patients who are living in misery.

The loopholes and avoidance of the requirements of the previously enacted laws have failed to improve the situation for mental health patients.

For instance, Congress passed the Mental Health Parity and Addiction Act (MHPAEA) in 2008, which broadened the scope of treatment of mental health under insurance programs.

Before this, mental health treatment was regulated by another law of 1996, named the Mental Health Parity Act. Although this law initiated a narrative of covering mental health expenses through health insurance, there were many loopholes in the legislation.

While Congress tried to cover up these shortcomings in the 2008 law, the implementation of this goal remained a pipe dream.

The MPHAEA was intended to finish all discrimination in treatment on paper. Whether it was the difference in treatment limits or cost-sharing, the 2008 law was designed to make a paradigm shift. However, the negation of the rule of law is endangering people’s mental health even now, and insurance providers are not following the protocols enacted under these laws.

As per the latest data, at least 29 percent of patients were denied coverage to be treated for mental health issues, compared to only 14 percent who were denied it for surgical reasons.

So, the division is apparent, and the barriers that are causing neglect in mental health issues need to be tackled as soon as possible.

Minimizing this gap between theory and practice is what the lawmakers should strive for, as a patient does not gain from health legislation if it is unable to provide him any relief.

Especially in the post-ACA times, this negation toward mental health assistance is nothing short of criminal, as the landmark Obama era legislation defines the coverage of Mental Health and Substance Abuse treatment as one of the essential health benefits.

As the violation of existing laws continues in neglecting mental health patients, now the Behavioral Health Coverage Transparency Act will make the insurance providers comply and actually follow the US laws, and not just dodge the system.

Senator Elizabeth Warren introduced this legislation in Congress, and it requires the insurance providers to disclose the in-depth details of their decision-making for denying mental health treatment.

This bill will also bind federal regulators to conduct no less than twelve visits for the assessments and audits of the insurance providers to verify whether or not they are complying with the US laws.

Similarly, the behavioral act will also empower patients to improve awareness of their rights and to complain against any insurance provider that is not complying with the laws.

If insurance companies want to do business in the United States, they need to comply with the federal laws and must strive to give equally fair treatment to mental health patients in the same manner as they treat physical conditions.

The urgency to treat mental health during COVID times cannot be understated, as the CDC has stated that the presence of mental health issues can be disastrous in patients suffering from the coronavirus.

The rates of hospitalization and deaths are increased in people suffering from mental disorders, so the need to treat this disease through insurance plans is especially vital today so that important lives can be saved.

The pandemic has adversely affected Americans’ lives in one way or another. When the Census Bureau surveyed in December 2020, almost 42% of Americans reported showing symptoms of depression and anxiety, which was up from 11% in 2019.

As per the data of the Federal Trade Commission, 8 million more cigarettes were sold in 2020 compared to 2019.

This was a significant increase in the countries like the United States where Cigarette consumption decreased after 2000 but increased immediately in the first year of the pandemic.

These statistics also suggest that substance use is increasing which is a depiction of the increasing depression and anxiety.

If the stakeholders think that tackling mental health through insurance is too expensive for insurance companies, they need to stop the mental illness causes in the first place.

Mental health is usually the child of addiction, which often triggers substance abuse. According to the Substance Abuse and Mental Health Services Administration, almost 51.5 million adults are facing some sort of mental illness in the United States. Overdoses, as the result of these mental health symptoms, have also been reported at an all-time high.

For instance, 25 percent of people from age 18-24 have considered suicide, based on the data from the Center for Disease Control and Prevention recently provided.

While the reduction or even elimination of suicidal thoughts and attempts have shown to be effectively improved by individual therapy, the cost of such treatment is prohibitive to most families.

The most effective programs, therapeutic boarding schools, can cost over $10,000 per month, with many severe cases requiring months or more of treatment.

With insurance companies providing either no coverage or low annual or lifetime maximum coverage amounts, this financial burden reverts back to the patient’s family.

The most common effects resulting are premature stoppage of the therapy or financial ruin for the family.

These statistics exacerbate the need to increase the overall insurance network countrywide, which should be broad enough to cover scattered people all over the United States.

No one should suffer to travel long distances just to get them checked for mental health issues, as it further increases the sufferings of these troubled people.

Not everyone can even afford to travel long distances, so the sole option may be ignoring mental health treatment at all, which is yet another prevailing curse in the United States.

So the availability of healthcare should be made possible without any political bias so that the suffering of the masses is ended.

The rule of law is also one of the problems which mental health patients are facing these days. According to law, insurance companies have to cover behavioral health services, but many patients are being denied this treatment when they need it.

Reliance on Data to Counter Mental Health Crisis is the  Urgency

The efforts of US Senator Elizabeth Warren are appreciable in this regard, who has introduced the Behavioral Health Coverage Transparency Act to hold those insurance providers accountable who are exploiting the mental health patients by denying them treatment.

This was a much-needed measure, as it will force the service providers to comply with the law or face the consequences of their actions.

Similarly, her efforts to encourage data collection regarding mental health disorder conditions, including eating and gambling disorders, also depict that she is a vibrant advocate of seeing things logically and assessing the need for mental health treatment based on data and not wild guesses.

As she urged the government to broaden the database in this regard, her efforts can initiate a new social narrative about the urgency of mental health disorders.

Not every American can afford quality mental healthcare, and the importance of this issue demands that including mental health in all sorts of health insurance should be made a compulsion.

Since the arrival of the Affordable Care Act (ACA), the inclusion of mental health in health insurance is certainly an appreciable step. However, the presence of too many conservative justices in the Supreme Court is a threat to the legislation.

Time and time again, Republicans have attempted to invalidate the act in its entirety, and these sorts of efforts are likely to be continued in the future as well.

While the Supreme Court has recently rejected the GOP lawsuit to invalidate the ACA, they are unlikely to stop their efforts to snatch the benefits given to millions of Americans under this program.

The need of the hour is to enforce even the non-ACA insurance programs so that they would be mandated to provide mental health services to the masses.

The president can also try to initiate a much-needed public debate by declaring a mental health emergency that would help people understand the issue in a better fashion.

Broadening the database regarding health issues is also one of the immediate steps which the Biden administration needs to take because enacting any legislation without relying on data will be a falsified approach and waste of resources.