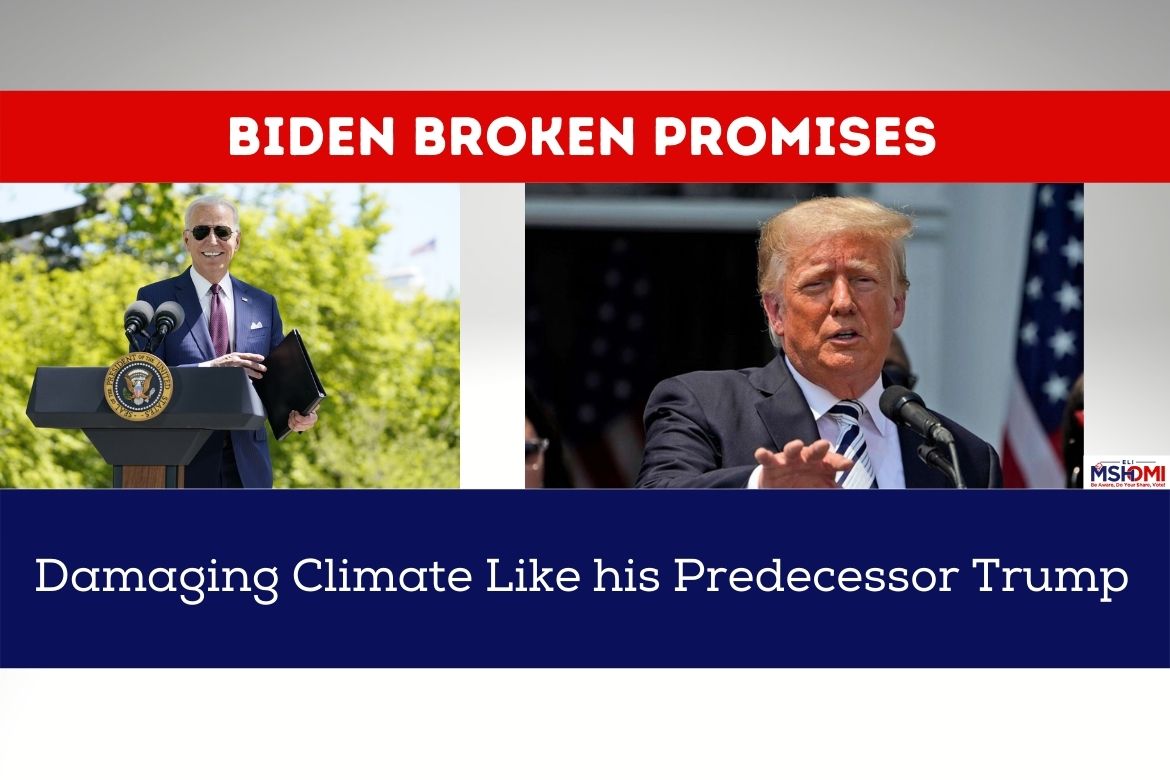 Biden’s pledge to heal the global climate is under severe criticism with the rising numbers of broken promises regarding the environment.

As the footage of Biden traveling in an 85-cars long motorcade in Rome went viral, the carbon emission watchdogs are questioning his narrative if he really wants to walk the talk or is it all a ruse to walk the popular agenda.

As if this controversy was not enough, his footage of falling asleep during the speeches of the global leaders at the COP26 summit has also pushed him into hot water.

During his nine months in the White House, Biden has been convincing America that climate change is real, but he himself seems unconvinced at times, which is clearly evident in his policies. After winning the presidency, Biden banned all new leases on public lands and offshore waters, which was an encouraging sign for the climate watchdogs.

However, just a month ago, the Biden administration approved 78 million acres for offshore drilling in the Gulf of Mexico, which is being termed as the largest offshore oil and gas auction in the history of the country.

Now, this is not only the case of broken promises but has also unveiled the hypocrisy of the administration. On one side, the president gives the notion in COP26 that, under his leadership, the United States has re-entered the Climate Change agreement and will lead the efforts to counter this threat. On the other hand, he is pursuing the same policies inspired by his predecessors.

In May 2021, the Biden administration approved a massive oil project in Alaska that will be producing 100,000 barrels of oil for the next 300 years.

While defending this project, the administration stated that Intergovernmental Panel on Climate Change does not provide sufficient causes to stop such operations.

The hypocrisy has led the Biden administration to defend the oil and gas drilling in Wyoming while indicating that the president may not renew the pause implemented on the extraction in the state that is due to end this year.

Biden backed down on a corporate tax, which would have played an important role in funding the proposed infrastructure investment. The rising opposition from moderate Senator Joe Manchin seems to be the reason why Biden wants an easy exit. “We have reached the code red,” were the words echoed by Biden during the UN meeting; however, his efforts tell a different story.

Democrats have power in both chambers of Congress and the White House, leaving the president with no excuse not to implement his promises.

Biden is kept back only by his will and conflict of interest of his fellows Democrats in the oil and gas industry to implement the climate change policies.

Senator Joe Manchin, a moderate Democrat, has interests in the coal industry and is the biggest obstacle to the Clean Electricity Payment Program, urging the electricity companies to shift from fossil fuel to clean and renewable energy sources.

The “Build Back Better Bill” was set to be the most significant effort of the United States in the fight against climate change but is now being orphaned after negotiations with moderates.

The new plan does not include the fee paid by oil and gas companies for emitting methane, which rules out the possibility of any framework to reduce fossil fuel usage and cut subsidies flowing to the oil, coal, and gas companies.

While Biden apologized to the global leaders for Trump’s behavior of withdrawing from the Paris Climate Accord, he is yet to overturn many of his climate policies.

The president has still not decided whether or not to restore the original boundaries of Bears Ears National Monument and Grand Staircase-Escalante National Monument, which were slashed in size by Trump. These might not seem important for climate change at first, but this is a question of preserving biodiversity and hence the climate.

With a stroke of the pen, the president could have seized Line 3, Mountain Valley Pipeline, and Enbridge pipeline, but he refrained for the reasons best known to him. The Line 3 project alone will be responsible for a carbon cost equivalent to fifty new coal power plants.