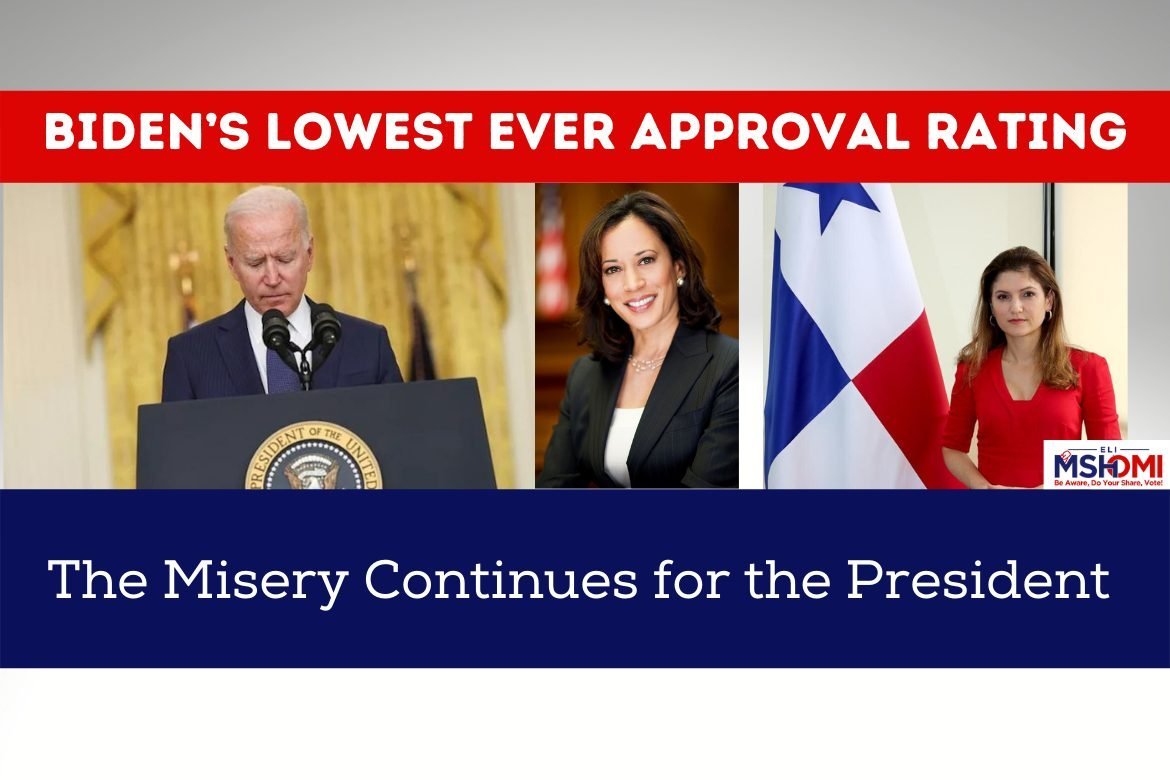 The blunders that the Biden administration committed in August continued in September, resulting in his latest approval rating declining to a historic low of 38%.

The Quinnipiac University’s latest poll has worried Biden, as Americans are rejecting his agenda in big numbers.

With this, he is at the forefront of putting Democratic lawmakers and gubernatorial candidates at risk, who then become vulnerable to lose their seats in the next year’s elections.

While the haphazard withdrawal of the US from Afghanistan initiated the crisis, the failed social spending bill negotiations, poor treatment of Haitian immigrants, and yet another upcoming wave of immigrants are fomenting the crisis that could choke Democrats in next year’s elections.

Recently Panama’s foreign minister visited the United States and claimed that another wave of Haitian immigrants is coming towards the US, comprising almost 60,000 people.

While the administration failed to counter the surge of 8,000 people on the Del Rio border recently, this new wave can choke the US resources to the maximum, hence pushing the Biden administration further into hot water.

The incumbent administration is failing to incorporate the voices of the neighboring countries in its border control policies. The fact that most of the immigrants come from South to North America through the Panama canal makes Panama an absolutely important country for the US border policy.

Panama is the first country where these immigrants receive medical attention and food as they typically reach there suffering from malnutrition. So, incorporating Panama while crafting the US border policy is an absolute necessity.

Kamala Harris has often been seen dealing with the immigration issue on Biden’s behalf. This is the reason why she also visited foreign countries to discuss the matter with relevant authorities.

Keeping in mind the importance of Panama in controlling the US borders, the US must collaborate with this South American country as much as possible.

If Biden fails to do that, his approval rating will continue to decline as the 2022 midterm election nears. The Haiti immigration crisis has also worsened people’s opinion against Biden. When Biden unilaterally decided to vow to make the border agents pay for the things they did with the incoming immigrants, the rant against him from various sectors of the society was high.

Many stakeholders believe that Biden should not have made a verdict against the border officials until the end of the investigations. However, some emotional quotes encouraged him to ax his own feet.

The US general’s testimony against the Biden administration is also supposed to kill Biden’s approval rating.

As Biden lies got busted by General Mark Milley and the military’s top leadership, more voters than ever are now disowning him for lying to Americans, which is evident from the latest polls as well.

The future is surely uncertain for the Biden administration. Sean Patrick Maloney has already warned the ruling party that it could lose the House majority if they continue embracing woke culture to its fullest.

This makes the timing of the reconciliation bill even more important, as the passage of this bill in its present form may portray the notion that Democrats are promoting socialism in the country and hence the woke culture.

Some elements of the civil society are also furious over the vaccine mandate on Americans and yet no vaccine requirements for illegal immigrants.

And Republicans are cashing on these things religiously. They are once again on a roll of gaining the maximum advantage out of Biden’s blunders.

Now, as the tussle within Democratic factions remains present, the hopes are limited that the Biden administration will be able to cover up its reputation in a due amount of time.

If they fail to do it, a backlash of voters is apparent that can send many Democrats packing in the 2022 elections.