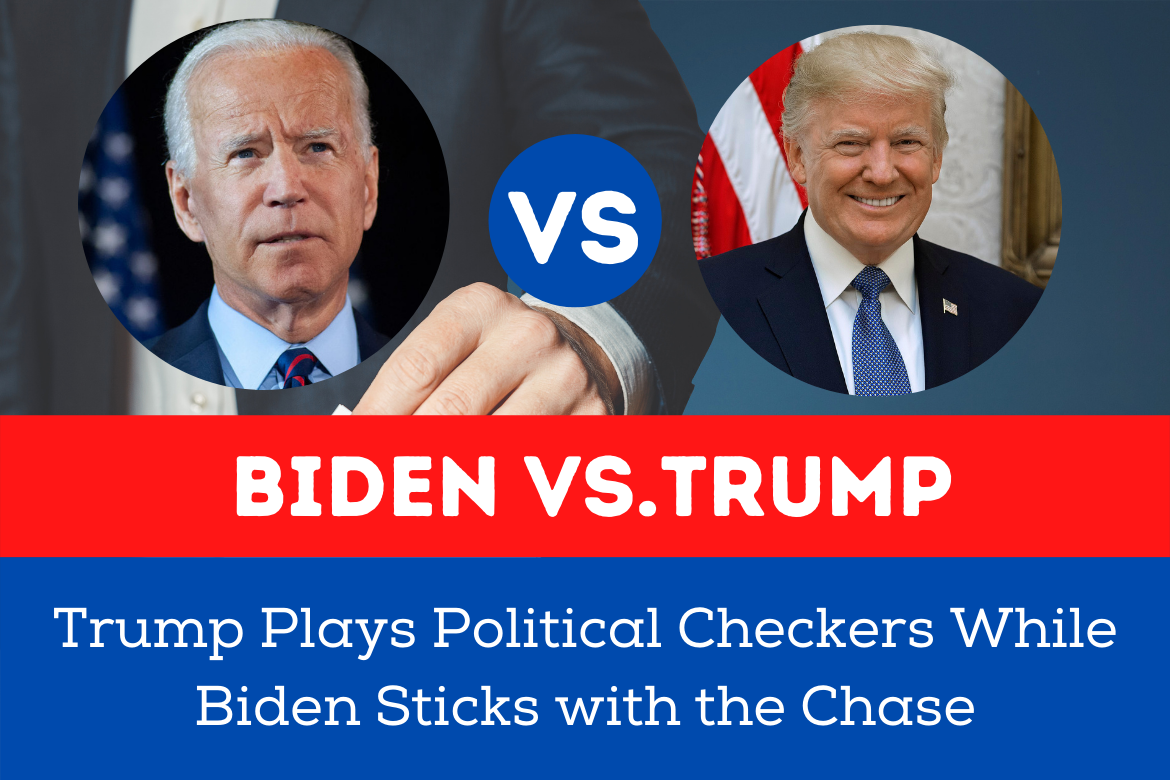 The Biden vs Trump presidential elections are over, as Biden comes out on top. It all started in 2019 when Joe Biden won the Democratic primary and was declared to be the Democratic candidate against the Republican nominee, President Donald Trump. Donald Trump, the son of a real estate tycoon and himself a businessman, successfully impacted the Republican party. Within a very short period of time, Donald Trump became famous after entering the US political arena. Compared to him, the newly elected president, Joe Biden, is a career politician with almost five decades of experience in US politics.

Donald Trump ran for president in 2016 and was elected as the 45th president of the United States by defeating the former Secretary of State Hillary Clinton.

Fear of Trump started after this, which was the beginning of the Trump presidency as he won the White House. This Trump fear would neither be great for the United States nor Trump himself, as Trump would lose to former vice president Joe Biden in 2020.

In his so-called mission of “America first”, Trump made “America Alone.”

As the events unfolded, Trump turned out to be a political checker who made America alone. However, the observations suggest that Joe Biden sticks with the chase and tries to make the American dream a reality.

Donald Trump had short term goals of supporting just his base of friends and alienating America from the rest of the world. This is the very reason why people label his policies “America alone” policies.

Now that four years of Trump presidency are over, we need to speculate on some questions regarding the perception of Donald Trump being a good politician and a good president.

Let’s make a detailed Biden vs Trump comparison to unfold how both politicians are different in their approaches. A Biden vs Trump issue comparison will allow you to get some deep insights into the things you would have never heard. The Trump presidency in 2016 became possible because of people both from within and outside the United States. Some of them had a cause, others just wanted to have their man at the top, and some just wanted favorable business terms and policies.

Trump became president and fulfilled the promises he made to wealthy business owners and other nations, some of which have plans to destroy America.

The Trump presidency is a combination of making favorable policies for other countries at the expense of the American people. The Trump White House suggests a sorrowful picture of events that destroyed the United States.

Trump used the American people just to get votes only. President Donald Trump promised them to deliver better health, better economy, better education, and much more.

Instead, he placed immigration restrictions, destroying the passion of those who wanted to find their share in the American dream. America is the land of immigrants, and in this land, the future of thousands of immigrants is in the air.

Trump fear is so pervasive that spreading hate and divide became common in the United States. He rolled down many progressive policies of President Barack Obama’s administration, which he enacted for the people of the US.

During the Trump presidency, the most developed country of the world witnessed riots in its streets, had an economic recession and failed to control a pandemic that was even controlled by developing countries.

Now as his last days in the White House arrive, he is destroying America with full force. It seems that he wants to spread as much chaos in the USA as he can. Trump as a Ringmaster of American Politics: Trump Destroying America for Personal Benefits:

President Trump thinks of himself as a political ringmaster. He thinks that he can do anything without getting caught.

This approach of Trump is also inculcating Trump fear in the masses. This is the reason why even Republicans consider him as God, as they are afraid to speak a word against him.

Trump Lies About the Economy: “Not the best” economy:

President Trump repeatedly claims that he has built the strongest economy in the history of the country. Although the economy was good in the pre-COVID-19 era, it is not right to say it is the strongest in history.

There have been instances when the American economy was far greater than during the Trump rule.

Moreover, he built the economy on the foundation established during the last three years of the Obama-Biden administration.

America faced huge economic losses after the financial crisis, and it was President Obama’s administration that put it back on track for Trump.

Besides, the economy of America during Trump’s rule was worse than China, Italy, Germany, the Euro-zone, and many other Asian countries. Donald Trump also failed to develop an economic infrastructure that could survive disasters like COVID.

America First to America Alone: The Sorrowful Journey of America in the Trump Presidency:

Donald Trump entered the office with a policy of America first. However, in the four years of the Trump presidency, it became America Alone. This thing can be validated from the following facts.

This defeat in the UN was the result of the Trump policies, which made America alone. Over the years, Trump turned the US allies into enemies.

The foreign policy of the Trump administration was designed to make “Ämerica alone” possible.

Trump’s Game of Fear: The only way for Trump to Rule People:

The Trump presidency has instilled fear in the masses. He has his own version of events, and anyone who does not believe them is considered as “anti-American” in the eyes of Trump.

Trump fear is evident from the following events: Biden vs Trump Issue Comparison: Biden sticks with the chase with a moderate approach:

The only thing more powerful than a Dragon is a dragon slayer.

Trump was a dragon who considered himself to be undefeatable until the dragon slayer, former Vice President Joe Biden, entered the race. In the Biden vs Trump contest, Biden came out victorious by winning 306 electoral votes compared to 232 for Trump.

A Biden vs Trump comparison became much important considering the contrast of personalities both these people have.

Biden knew every move that Trump was making, so he countered everything with full force. As Joe Biden wins as the Democratic candidate for the presidential election, Donald Trump was no longer the ringmaster of American politics.

Trump defeated Hillary Clinton, but Biden was different. He was experienced and a veteran of American politics. Similarly, anti-American votes also went in favor of Democrats.

The Biden campaign was criticized by many for being outdated, but he knew the culture of American politics. Now the new ringmaster is Joe Biden, and he will not be an easy target for the political opponents and the Republican Party.

The Joe Biden victory is historic for many reasons. This includes Biden’s ability to turn the deep red states into blue states, like Arizona and Georgia, after so many years.

The major part of the electoral votes of Biden came from the red states. Let’s see how Biden flipped the red states in his favor. Four years ago, Trump promised to bring change, and Hillary Clinton was expected to carry on things as usual.

Voters liked the idea of novelty and trusted Donald Trump with their vote. However, their expectations were shattered within the first few weeks of Trump presidency.

Biden learned from the mistakes of Hillary Clinton and entered the Presidential race to finish the Trump doctrine of America alone.

As Biden moves towards his transition, let’s look at five factors that helped him to run a winning campaign.

Hillary Clinton helped Trump to win the 2016 presidential election more than anything. She failed to reach the emotions of voters through her words and message.

Donald Trump was a master of this art. He knows how to appeal to the emotional side of voters. He introduced the Trump fear to attract voters by classifying Clinton and Democrats as someone to be afraid of.

Another factor that cost Hillary Clinton the presidency was that she failed to collect enough money to run a successful campaign. With people like President Trump in the game, Biden knew that he would have to run a billion-dollar campaign.

The data shows that the Biden campaign has spent $77 million in the last week of the election, as compared to $40 million for the Trump team. A Biden vs Trump comparison in terms of financing the election campaign was in favor of Biden.

Trump considered money as his advantage over the Democrats, but Biden defeated him in that too by managing a proper financial strategy.

COVID-19 is the biggest factor that took the presidency away from Donald Trump. The Trump administration failed miserably in controlling the pandemic, so Biden promised to provide the country with an effective strategy to fight the worst crisis of the country.

Americans are fed up with the virus, and right now, everyone wants to see it end, and they knew that Trump could not deliver.

In this Biden vs Trump contest, Biden won the American trust by assuring people that he will be the right choice to tackle the coronavirus crisis.

Vice President Biden observed the situation well, as recent polls by Fox News and CNN show that Biden was the favorite candidate of the senior population of the United States.

According to Fox News polls, Biden leads the age group over 65 with 10 points. Similarly, CNN shows the same to be 11. Moreover, just 42 percent of the senior Americans above the age of 65 showed satisfaction with Trump’s performance. Most seniors, 51 percent, believe that Biden will be better at handling COVID-19 and the economy.

Winning this Biden vs Trump battle of senior citizens turned out to be great for Biden at the end of the day.

The 2020 presidential elections established Trump as a Greek Tragic Hero who brings his own downfall. It would not be wrong to say that Trump bought his own downfall with his hate and destructive policies.

He was president of his base and those groups that made him the president. After winning the presidency in 2016, Trump forgot that he would have to go to the elections again in 2020.

He spent the time making his friends happy and instilling Trump fear in the masses. In a democracy, elections are the examinations where incumbents are tested by the public, who hold the real power.

When the time came for Trump, he was not prepared again. Trump tried to cheat by making the elections controversial, but of no use.

Joe Biden has already won the Biden vs Trump polls comprehensively. When entering the political spectrum of the United States, President Donald Trump considered himself a smart man who will achieve everything that he desires. However, due to his policies, “America Alone” is a sad reality of today.

Trump became the ringmaster of American politics by defeating Hillary Clinton. Little did he know back then that his policies will not win him the elections in 2020 again. His four years in office created a nervous breakdown in the Americans.