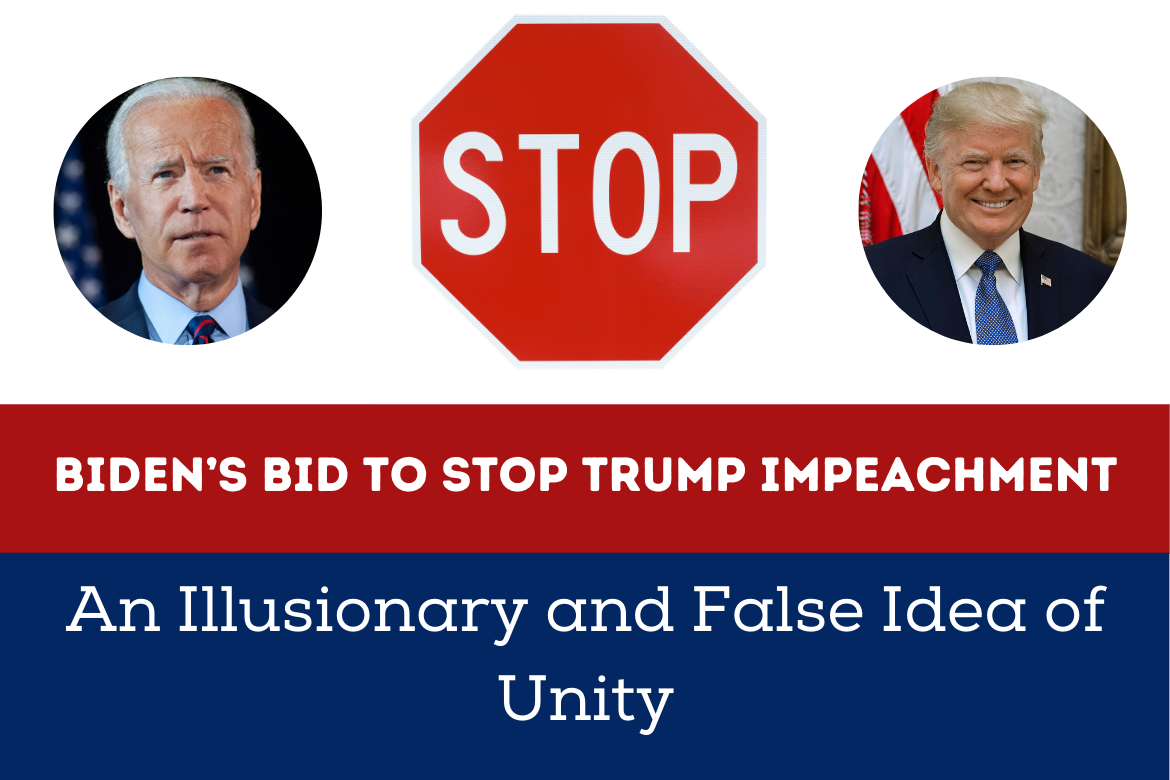 The misguided optimism of the president-elect Joe Biden regarding American unity has now crossed almost all the limits. His ambition to appease his Republican political fellows during his term of presidency may appear an optimistic move to many, with a lot of positive gestures, but not making Trump accountable for the Capitol Hill riots is out of the question.

If Biden’s illusion becomes reality and he does not endorse the concept of making the powerful accountable after coming to power, it will make a poor first impression of him on the Americans who voted for him.

While some Republicans want Trump to resign from office, others are encouraging Biden not to pursue the impeachment of Donald Trump. If Biden prefers to side with the soft corner of his heart just to support the handful of Republicans in these matters, he will definitely stop the Democrats from impeaching Trump.

How are Republicans asking Biden not to impeach Trump, and why Biden is not endorsing the impeachment process? Let’s have a look. Republicans’ Plea to the Man they Always Bashed:

Some Republicans played smart and voted for Biden to certify the electoral college votes despite knowing all of these facts. However, the primary motive behind all of this was to favor their political boss, Donald Trump, who is being worshiped as a god by many Republican lawmakers.

Now, the same group that voted for Biden’s certification is urging him to stop Democrats from impeaching Donald Trump once again, and Biden’s illusion may become a reality due to these lawmakers.

They are of the view that the impeachment will not serve to bring the country together. The group, led by Rep. Ken Buck, is trying to motivate Biden not to remove Trump. Instead, he is blaming the House Democrats for promoting division in society. Ken Buck said,

“House Speaker Nancy Pelosi has once again fanned the flames of partisanship by initiating another impeachment against President Donald Trump.”

The purpose seems to be clear. There is a group of House Republicans trying to come into the good books of Donald Trump.

Most of them are just seeing the smaller picture, as the charges waiting for Trump after inciting a mob to attack the US Congress are so much that he is not likely to pursue his political career any further after January 20. Biden’s Illusion of Unity: A Recipe for American Disaster:

The bigger problem, however, lies in the Democratic camps. Republicans requesting Biden not to remove Trump is not as dangerous as Biden considering obliging.

If Biden decides not to pursue Trump’s impeachment, he will likely lose the popular support even before assuming the presidential office.

In one of the recent speeches, Biden failed to endorse Trump’s second impeachment despite his radical actions in recent days.

This way, Biden will stray from the things he preached in his political campaigns about maintaining the rule of law.

A person who remains silent to hide the crime is actually equally responsible for the crime. Considering the fact that Democrats have now got the majority in both the House and the Senate, they won’t need the cooperation of the Republicans for most of the legislation.

So, for Biden to make an excuse to appease the Republicans and preach unity by ignoring Trump’s blunders makes no sense at all.

Probably a fair trial of Donald Trump before the court of law is more important than seeking the so-called Congressional unity at this point in time.

This is because otherwise, it will destroy the decorum of the United States Congress. The attack on Capitol Hill should be distinguished from the other blunders of Donald Trump.

Firstly, the Congress, i.e., the legislature, is the most important part of the government. A physical attack on this building is, in essence, an attack on democracy and hence the constitution.

Secondly, not making Trump accountable will set a dangerous precedent, giving future radical presidents an option to use extra-constitutional means to destroy the sanctity of the vote.

So, Biden’s illusion of unity has n space in practical politics.

Biden Must Learn to Walk and Chew the Gum Too:

While it is a pragmatic approach by Biden to undo the damage done by Donald Trump during his four years of presidency first, in recent days, Biden has repeatedly said that tackling the coronavirus crisis will be one of the first things to handle.

America is indeed going through unprecedented times regarding the healthcare crisis, economic downfall, and its foreign image. It is also true that Biden has to take quick actions in all of these matters.

However, as the upcoming United States president, he must develop the habit of walking and chewing gum too. It is an absolute necessity that Biden opens his eyes to reality because the sooner he does this, the better it will be for the country.

Biden must also remember that there was a handful of Republican leaders who challenged his electoral college votes at the January 6 meeting.

So, the superficial approach of Joe Biden’s illusion to shake hands with the Republicans will only backfire, as the very same Republicans backstabbed Biden and co. when he needed them.