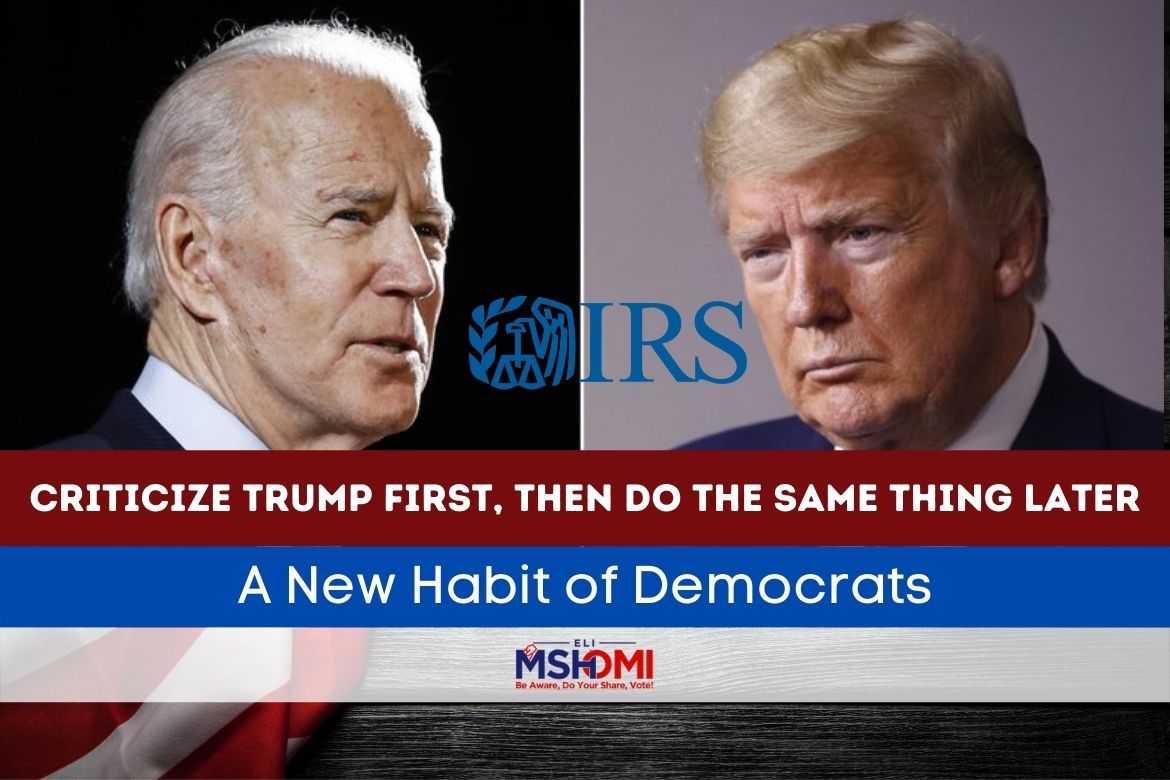 Having once accused Trump of politicizing the Internal Revenue Service (IRS) just for sending the IRS letters to Americans, President Joe Biden did the same thing this time.

Amid the rising scams under the name of IRS, many Americans assumed that these letters were also one of them, but President Biden actually sent these letters.

The Biden Administration is in hot water after repeating the hypocrisy they criticized in Donald Trump’s era.

The letters originated from the IRS were signed in the White House by none other than President Joe Biden.

The letters were motivated to inform the people about the depositing of money in their accounts.

Despite sending the checks using taxpayers’ money, the letters served as self-serving instruments by both the present and the former president.

This step has also raised the hidden concerns of the governments behind these stimulus packages. Biden’s IRS Letters: The Instrument of Self Service

Starting with “My Fellow American,” the exact wording which Trump used, stimulus check letters have arrived in the mailboxes of Americans during the third round of direct payments of the economic stimulus. The IRS sent the one-page letter signed by the president of the United States.

The letters aimed to promote Biden’s $1.9 trillion American Rescue Plan that provided relief to the Americans suffering from the pandemic in the form of direct payment of $1,400.

The letter, famously known as “Notice 1444-C,” confirms that the government has approved the third stimulus payment and the money has been deposited into the accounts.

Due to Biden being the signatory of the letter, Twitterati raised the matter on the platform, and people started assuming it to be yet another scam in the name of the IRS.

Seeing the severity of the matter and the pervasiveness of the fake news on social media, the IRS had to respond to the queries.

Had it not been designed as a political move, there were countless ways to inform the recipients about the stimulus checks.

The agency claimed that the Treasury Department is directed by the law to inform the eligible person about the stimulus package. However, there is no requirement to explicitly state the letter’s author, which the department accepted later on.

These are the times of the mass media where a simple press release or media briefing can inform the masses about the latest happenings. The matter of IRS letters signed by the president is evident of the hypocritical behavior of the Democratic Party.

Many Democrats criticized Donald Trump for doing this, and now they are silent when Biden is following the suit.

In April 2020, Americans received their first stimulus check after the spread of the COVID-19 pandemic. The former President Donald Trump also signed these stimulus check letters.

Things were pretty much the same back then when Donald Trump signed the one-page letter that came in the IRS envelope from the Treasury Department.

However, Democrats found it a moment and politicized the matter entirely.

“(Trump) unfortunately appears to see the pandemic as just another opportunity to promote his own political interests.”

Representative Raja Krishnamoorti, who chaired the House Committee on the IRS, also rebuked Trump for promoting his name through stimulus checks and said,

“That stimulus check is not a building or a winery or a golf course to be branded for someone’s personal benefit. It’s not even just a check – it is a lifeline that might make the difference between getting by or not.”

However, none of these two Democrats has yet to say a word against Biden for issuing the letters on the same pattern.

Taking credits for certain steps is not a new thing in American politics. Yet, the arrival of signed letters with the distribution of stimulus checks never occurred in the country before.

During the Great Recession, President Bush and President Obama distributed stimulus checks, but none took credit by sending signed letters.

And wasting money on the signed letters does not even make sense, as a simple announcement through mass media or a press briefing can help the people get the message.

It seems that the move was to publicize his American Rescue Plan even further and to get more appreciation just to approve bigger checks than the Republicans.

But the Democratic habit of going back on their words is deteriorating their credibility in the eyes of the voters.

This is not the first time. Democratic actions are not aligning with their talks. Whether their gentle approach in handling police brutality, voter suppression doctrine, and reaffirming their policy to Israel, Democratic hypocrisy is bulking up with every passing day.