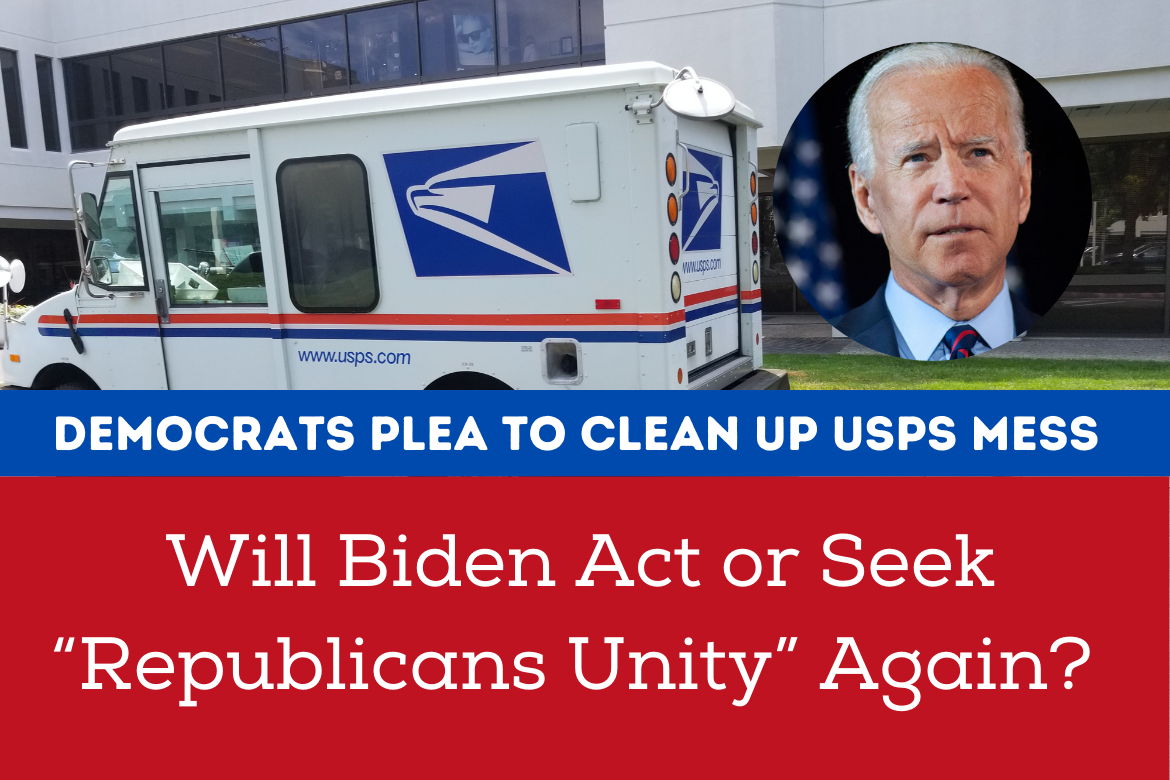 The United States Postal Service is one of the oldest institutions of the country, the roots of which can be traced to 1775 when Benjamin Franklin was appointed the first Postmaster General of the country. This institution is currently in a severe crisis since the last year.

The crisis just got another turn as Bill Pascrell, a Democratic Congressman from New Jersey, asked President Joe Biden to fire the whole USPS Board of Governors for “dereliction” as they failed to speak against the attack of Trump on the dignity of the institution.

It is important to note here that Trump repeatedly attacked the USPS and questioned the integrity of the ballots carried through the mail without any substantiated proof.

According to the Pew research center, more than 26.6 million Americans cast their ballots using the mail-in voting service in the presidential and other state and local elections in 2020.

However, the actual count is certainly bigger than this, as many states such as Colorado, Arizona, and Montana have not been able to provide a clear estimate. The United States Postal Service asked the Trump administration for $25 million to help with the election process, a demand which the Trump administration denied, adding insult to the injury.

Senate Majority Leader Mitch McConnell denied passing any law that will provide the USPS with this fund. Amid all of this, the sitting members of the USPS Board of Governors observed criminal silence aiding former President Donald Trump and Postmaster General Louis DeJoy in the process.

Now that the election is over and Democrats have power in the White House and Congress, the USPS has become Biden’s concern. Americans demand that he must bring the people to justice who did not maintain the responsibility of their oaths. Bill Pascrell wrote a letter to President Joe Biden and urged him to fire all six members of the Board of Governors, as none of them spoke against Donald Trump and the Postmaster-General Louis DeJoy as each of them tried their best to sabotage the election process by questioning the mail-in ballot process to curb the early voting efforts.

Bill Pascrell, in his letter, wrote,

“I am calling on President Biden to fire the entire Postal Board of Governors for their silence and complicity in Trump and DeJoy’s attempts to subvert the election and destroy the Post Office.”

“After several years of unprecedented sabotage, the United States Postal Service is teetering on the brink of collapse. Through the devastating arson of the Trump regime, the USPS Board of Governors sat silent. Their dereliction cannot now be forgotten. Therefore, I urge you to fire the entire Board of Governors and nominate a new slate of leaders to begin the hard work of rebuilding our Postal Service for the next century.”

Bill Pascrell’s Claims: Are They Valid or Just a Political Stunt?

It is pertinent to note here that Bill Pascrell’s claims are based on absolute truth and are not political in nature.

The 2020 presidential elections saw many obstacles in the way, and the obstructions in the mail-in voting are the biggest of them all.

Former President Donald Trump tried to sabotage early voting again and again in one form or another.

First of all, he refused to pass USPS funding, which became controversial as most of the early voters were tending to be for Democrats. So, indirectly, he was sabotaging the Democrat’s vote bank.

Secondly, early voting has become a sort of tradition in the United States, and more people are making an inclination toward early voting. Biased attacks on the USPS are promoting the limitation on the people’s right to vote, and hence the Constitution of the United States.

Similarly, Postmaster General Louis DeJoy also helped Trump in furnishing these conspiracy theories, as he made the whole institute controversial through various measures.

Not only this, the Board of Governors is supposed to play a crucial role in the policy-making of any institute.

In this case, it was the obligation of these members that they stand up to defend the integrity of the same institute in which they were serving. Their silence means that they were further paving the way for Donald Trump to label the unsubstantiated allegations on the Postal Services. President Joe Biden promised to save the United States Postal Service from privatization and supply them with needed funds to revive the institution’s old state.

Even before the presidential election, the 300,000 members of the National Association of Letter Carriers endorsed President Joe Biden, seeing him as essential for the survival of the department. The postal union presented Joe Biden as the defender and an ally of the USPS.

Biden’s first challenge will be to fix the governing structure of USPS by replacing Postmaster General Louis DeJoy with a more competent and experienced professional. This is a problem because there is no fixed time limit to serve as the Postmaster and only the Board of Governors have the authority to replace a Postmaster General.

Now, when the positions of the Board of Governors have become controversial, Biden must make these members pay by firing them and appointing a competent team who could dare to speak against the injustice.

Former President Donald Trump appointed six members of the Board of Governors, so it was one of the reasons why these members did not speak against the fake propaganda of Trump, as Trump had all the authority to replace those board members.

President Joe Biden will have to make Democratic appointments to the nine members Board of Governors. However, his could take some time as it is easier said than done.

The other way is to involve Capitol Hill, where now the Democrats hold the majority. At the onset of COVID-19, postal aid was restricted with the CARES ACT, which only provided a $10 billion loan. Now another relief package could forgive that loan and even provide more direct aid.

Biden will also have to revoke the requirements of paying billions of dollars annually by the USPS to support its benefit fund for future retirees. This was largely ignored by former presidents Barack Obama and Donald Trump and significantly contributed to pushing the department to its current position.

Moreover, Biden will have to make it easy for the postal workers to join a union for the engagement in a collective effort bargaining over pay and benefits. The Biden administration will have to diversify the services offered by the United States Postal Service to increase the revenue of the department.

President Joe Biden could ask Congress to pass bills that would raise the revenue of the USPS through measures such as offering low-interest bank accounts to the public. However, such action will require help from Senate Republicans, and a few moderates such as Senator Susan Collins and Steve Daines have been interested in postal reforms, so that will not be a point of concern for Biden.

Biden may not be able to deliver immediately, but his power allows him to design long-term policies that will ultimately save the department from destruction. Mail-in voting has identified the problems, and now they just need a good plan to save the intuition that millions of Americans rely on.

What Are the Major Problems Faced by USPS?

The United States Postal Service ended the fiscal year 2020 with a $9.2 billion net loss, marking the 14th consecutive year in a budget deficit. The problem started during the presidency of Barack Obama and is still on because previous governments failed to recognize the urgency of the situation. The total loss since 2019 is $363 million, largely because of the pandemic.

Although the USPS witnessed a 19 percent increase in package volume, top executives warned that the pandemic would repeat the 2008 situation, when agency mail volume decreased by 20 percent and never recovered to the pre-recession era.

Most importantly, the department is short of cash to help with its activities and is drowned in debt from head to toe. Instability in the governing structure is also a reason behind the current situation of the department. Presidents used the department for personal gains by installing their members of the board and postmaster general.

The manpower of the department has been working tirelessly during the pandemic without any kind of additional benefit. Many postal workers contracted the virus and returned immediately after the quarantine because, after the election, Christmas approached. One of the postal union members described their situation in a text to Time as “buried and short-staffed.”

DeJoy: A Man with Political Ambitions to Destroy the USPS

Postmaster General DeJoy had a conflicting background regarding his political affiliations; therefore, his appointment is controversial. DeJoy is a former executive in a logistics company with no experience in postal services but had close ties to former President Donald Trump, so he easily became the Postmaster General.

It is also important to note that DeJoy donated about $1.2 million to the campaign efforts of Donald Trump and was appointed to facilitate Republicans in the electoral process, as most of the Americans cast ballots by mail-in voting.

The Trump administration refused to provide financial aid. Therefore, DeJoy instituted changes to eliminate overtime distribution and sorting, which eventually slowed the process, causing all the confusion and chaos.

As the time demands quick action from President Joe Biden, it is upon him whether he does justice with the department by appointing a competent team or once again seeks Republican unity just to satisfy the interests of Mitch McConnell and the company.