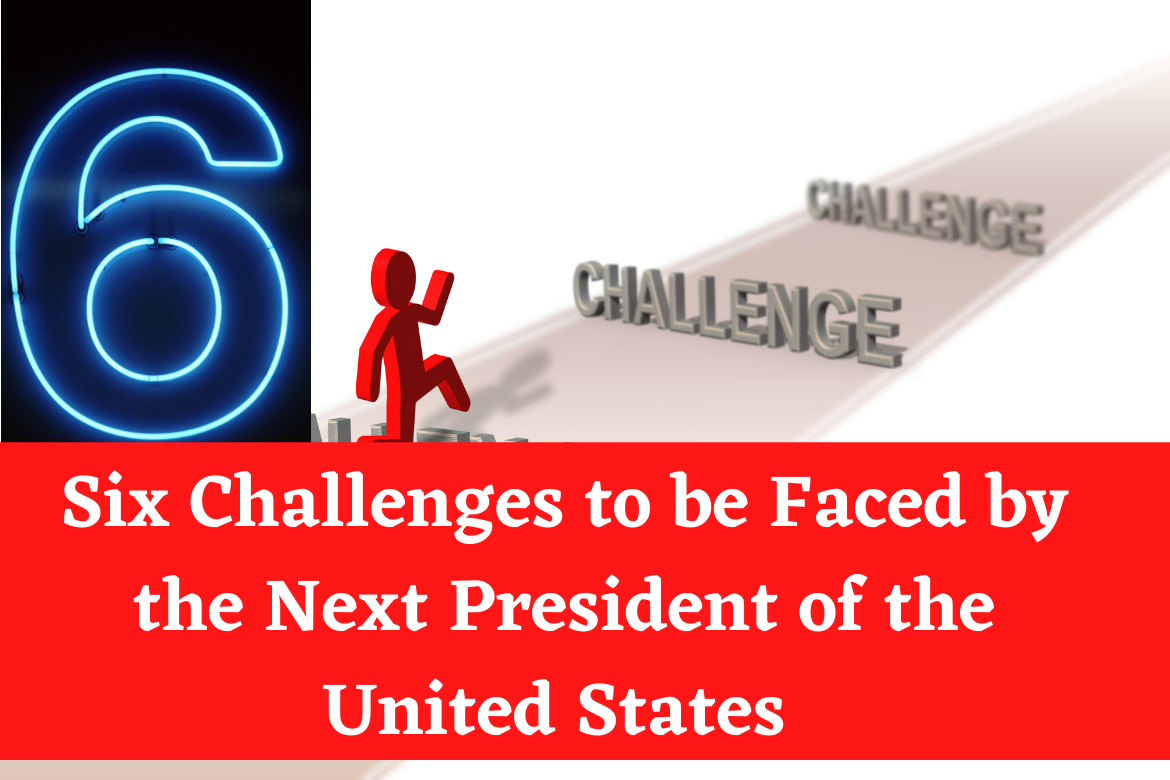 After months of rallies, debates, time on the campaign trails, uprisings, and COVID-19 restrictions, the United States will now choose the next president in less than a week. No matter who wins the upcoming presidential election, the challenges for US president will be severe, and he will have heavy responsibilities on his shoulders. He will have to act quickly and strategically to get the country out of its current situation. The country faces several challenges; however, there are six main challenges for US president who is going to be elected on November 3.

In this article, we will shed light on the six challenges to be faced by the next president of the United States.

6 Challenges for US President: The economy always remained one of the severe challenges for US president and the same will be the case this time. When President Obama took office after the financial crisis of 2008 and 2009, the country was going through one of the worst economic phases of history. The unemployment rate when Barak Obama took office was 7.8 percent, and he left it at 4.8 percent.

The Trump administration inherited an unemployment rate of 4.8, and it went to 3.5 percent, but now, when a new president is to be elected in the November election, the unemployment rate is 7.9 percent, as shown by the statics of the Bureau of Labor.

COVID-19 has not only affected the health of individuals. The global economy suffered a huge blow due to the lockdowns and COVID-19 restrictions. Moreover, after COVID-19, the stock market witnessed an all-time high Dow of 29,551 points in February. On March 9, the stock market fell by 2000 points in one day.

The stock market is currently on a rollercoaster ride and moving downwards. Businesses were closed during the lockdown, companies were unable to function, employees were infected, tens of millions have lost their jobs, and thousands are suffering to put food on the table.

This whole situation demands high and immediate actions from the next president of the country. He will have to develop policies not just to heal the economy but also to make it less vulnerable to such threats. Employment opportunities have to be created, and businesses will have to be provided with relief packages to function in their full capacity. Ending the Debate on Immigrants

The issue of immigration had been in Congress for decades. After 2016’s presidential election, it was one of those challenges for US President Trump for which took some hard decisions, which left many immigrants in distress. According to the Census Bureau, more than 44 million Americans are immigrants.

The immigrants and their U.S. born children make up 28 percent of the country’s population. The undocumented immigrants living in the country for more than a decade are estimated to be more the 11 million.

These immigrants have played an important role in making America a unique nation. The next president of the country will have to put an end to the debate of whether to allow immigrants or not.

This is a serious challenge, as any loophole in the policy could damage the interest of Americans, so the country will need a long-term strategy. The Issue of Racial Discrimination and Police Reforms

Racial discrimination and police reform are two of the biggest issues in the United States at the moment; even more important than the economy, as they are impacting every sector of society. So these two challenges for US president will have to tackle on an immediate basis.

Recently the country witnessed a massive uprising in the form of Black Lives Matter, and, if this issue is not addressed, there are threats of civil disobedience and more uprisings against the government.

The police reforms are not only needed in matters of racial discrimination. There are several other matters, such as corruption, that should also be identified and countered with the help of reforms in the department.

The government is spending more money on keeping citizens behind bars than on their rehabilitation. Individuals who spend time in jail face a hard time getting jobs or accommodations even after being punished for their crimes. So, this area will demand a lot of attention from the next president of the country.

The Growing Influence of Technology

There have always been debates on the positive and negative impacts of technology on human society. The positive side was seen during COVID-19, which helped many individuals to keep their work going while saving themselves from getting the infection. However, there is also a negative side emerging with the growing influence of technology in daily life.

COVID-19 has created a space for technology in the global economy, making it more vulnerable and dependent. The increasing role has also created intense pressure on families; new threats of surveillance and discrimination on digital marketplaces are emerging.

Additionally, privacy is more a personal issue, as social media companies have now collected more user data than governments. This user data is used in various activities such as meddling with elections, as we saw in the 2016 presidential election.

The next president of the country will have to draw a line between the negative and positive sides of the technology.

The country’s population is becoming more and more dependent on technology to carry out their various jobs, gradually leading towards health and psychological issues among youngsters. It will be a challenge for the next president to create awareness among the public about such issues and lead them to a brighter rather than problematic future.

The Intractable Issue of Climate Change

The issue of climate change is a global problem and needs to be addressed before the time is too late. The previous government took no steps to stop the emission of harmful gases into the environment.

In 2018, the United Nations’ intergovernmental panel warned that we have less than a decade to hold back global warming, even at a moderate level. Despite the warning, the government took no step, and so the responsibility falls on the next government.

Climate change is already placing a heavy impact on the budget. The city of Miami spent $500 million on roads and seawalls, and Louisiana will have to spend more than $25 billion because of rising sea levels.

The next government will not only have to take steps to reduce carbon emissions but will also have to spend additional money on public safety from natural disasters, which are linked with climate change in one way or another.

The next president’s responsibility is now double because he will have to fill the gaps left by the previous government. America needs a president with a good policy of climate change that will make this country carbon-free, or else there will be a new country left in the coming years. COVID-19 has identified many flaws in the health care policy of the United States. The policy is currently undecided, and the decision is to be taken by the Supreme Court. The Affordable Care Act is in a sort of legislative limbo and demands legislation, which will be made by the next government. COVID-19 crisis will be one of those challenges for US Presidents that will decide the course of many other things including the economy in times to come.

There are also issues such as rising pharmaceutical prices, behavioral health, closure of rural hospitals, and rising use of drugs among youngsters. It will be a challenging situation for the next president to make laws and implement them before it is too late.

The Democrats and Republicans are keen to get their candidate in the Oval Office, but the question here is how well-prepared they are to face the above-mentioned challenges. These are just a few of a dozen or more other issues that the country is going through; however, these six demands immediate action from the next president.

On November 3, America will choose a new president. It does not matter who he is; the only thing that matters is how well prepared he is to address these challenges.

These issues are the criteria on which a candidate should be judged for his merit to hold the office of the president of the United States.

Who is going to win the 2020 elections? Readout the latest Psychic predictions to figure it out.