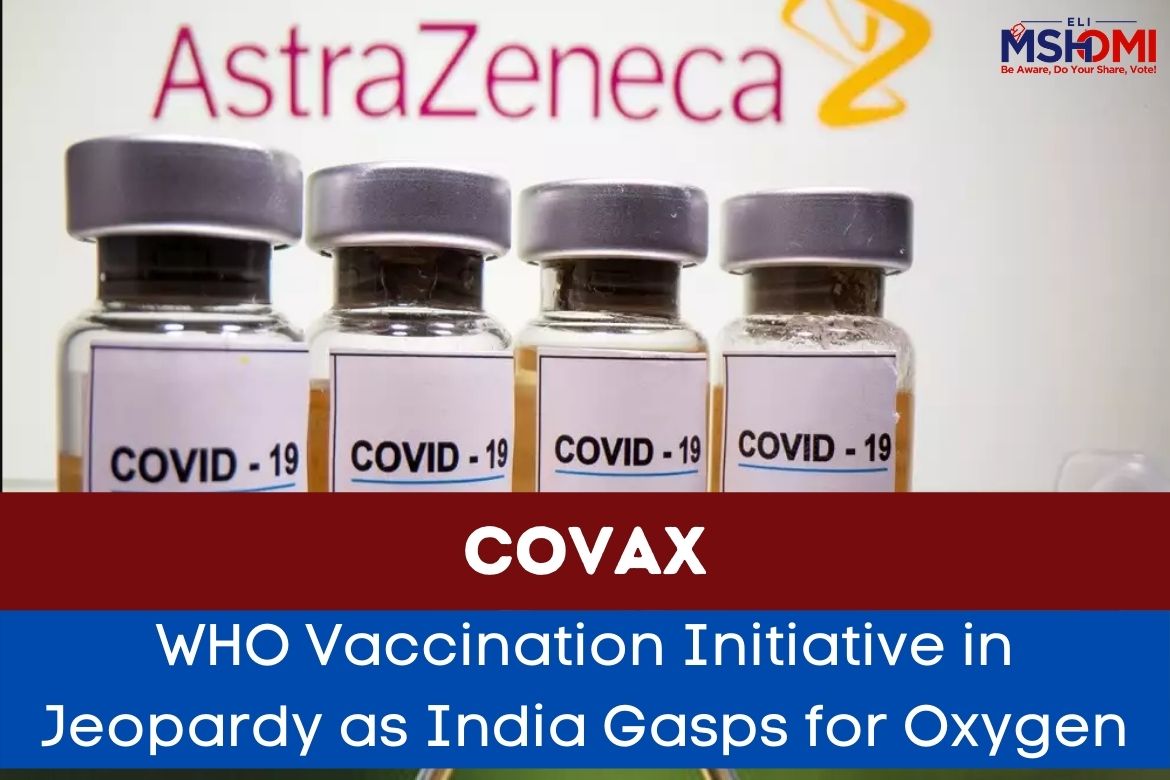 Amid the rising pandemic, the COVID-19 Vaccines Global Access, popularly known as COVAX, was formed as an avenue to help the lower and middle-income countries for equitable access to the coronavirus vaccine.

This initiative, led by the World Health Organization (WHO) and co-sponsored by the European Commission and France, aimed to develop two billion doses of the COVID-19 vaccines for the vulnerable population by bringing the global organizations under one flag.

This way, the global leaders eyed to export vaccines to the countries that are unable to manufacture them in their own countries.

India was one of the significant contributors to COVAX, but the circumstances in India are shattering the alliance itself.

With people gasping for oxygen on roads, the health infrastructure of India has shattered entirely, with the country recording more than 0.4 million infections per day.

The situation is so severe that people cannot find places for cremation as they see their loved ones fading away in front of their eyes.

Only ten percent of the population of the second-most populous country is vaccinated, and India, which was ahead in vaccine diplomacy, is now unable to meet the local demands.

As the global leader in the vaccination efforts, the pressure on the United States is also mounting. Despite saying that the United States will act as “an arsenal of vaccines” for the rest of the world, the Biden administration is yet to take any considerable measure for the estranged country.

How can the United States and COVAX help India flee the coronavirus crisis in times when people have been dying in mass daily? Indian Crisis Poses Threat to the Whole World: The COVAX Must Come to Action

The White House came under immense pressure to aid India in escaping out of the current mess. While on the one hand, Joe Biden has endorsed the plan of the patent waiver on the COVID vaccination, on the other, he has also extended his verbal support to India in these trying times.

India is one of those countries that is exporting vaccines with COVAX, and the prevailing circumstances are making it difficult for the country to help other nations.

The Indian government has banned the large-scale international supply of the Coronavirus vaccine in March. However, small donations to other countries are still going on, along with the promised vaccine supply to COVAX.

It means that on the one hand, India is facing difficulties to make internal ends meet; on the other, some African countries are also expected to face brutal circumstances as COVAX is lagging behind by 150 million vaccine doses due to the export restrictions in India right now.

This is a challenging scenario seeing the already persistent ignorance of the coronavirus in the African countries.

The Serum Institute of India is producing more vaccine doses than any other organization in the world; still, it is not able to produce enough vaccine for the gigantic population of India.

In early April, the Serum Institute of India was producing more than 4.5 million vaccine doses per day and has expanded its operation since the start of May.

Adar Poonawalla, the chief of Serum Institute of India, has already indicated the delay in the vaccine delivery, which can strain the already deteriorated infrastructure of India.

Serum Institute of India is producing a local version of the AstraZeneca vaccine, while another institute in India, Bharat Biotech, is producing Covaxin. The US Must Help India Breathe

The United States and India have long been allies in the military and economic avenues, yet these times demand cooperation beyond alliances.

The United States plans to supply 60 million doses of the AstraZeneca vaccine to other countries, including India, depending upon the availability.

The USA has also ensured the supply of the raw material for the production of Covaxin in India.

White House Press Secretary Jen Psaki has said that the United States is keen on vaccine cooperation and considers it a priority.

Psaki added that the United States is discussing matters with India and will help the country in every possible way to fight the pandemic.

Solving the Indian crisis should also be the priority for the Biden administration, seeing that it is impacting almost all middle-income countries to some extent.

The deepening crisis is restricting India from contributing to the COVAX program, ultimately straining the health infrastructure of the poor countries.

Dr. Fauci is absolutely on point in his approach that the world leader must bandwagon India in evading the virus.

Joe Biden should also advise India to impose a national lockdown, as suggested by Dr. Fauci, as this seems to be the only approach to tackle the crisis.

A country that once promised to export vaccines is struggling this time to vaccinate its own people. The challenge remains real for the world as the masses in India gasp for oxygen on roads with the neighboring countries watching the situation, fearing that this severity must not come in their country.