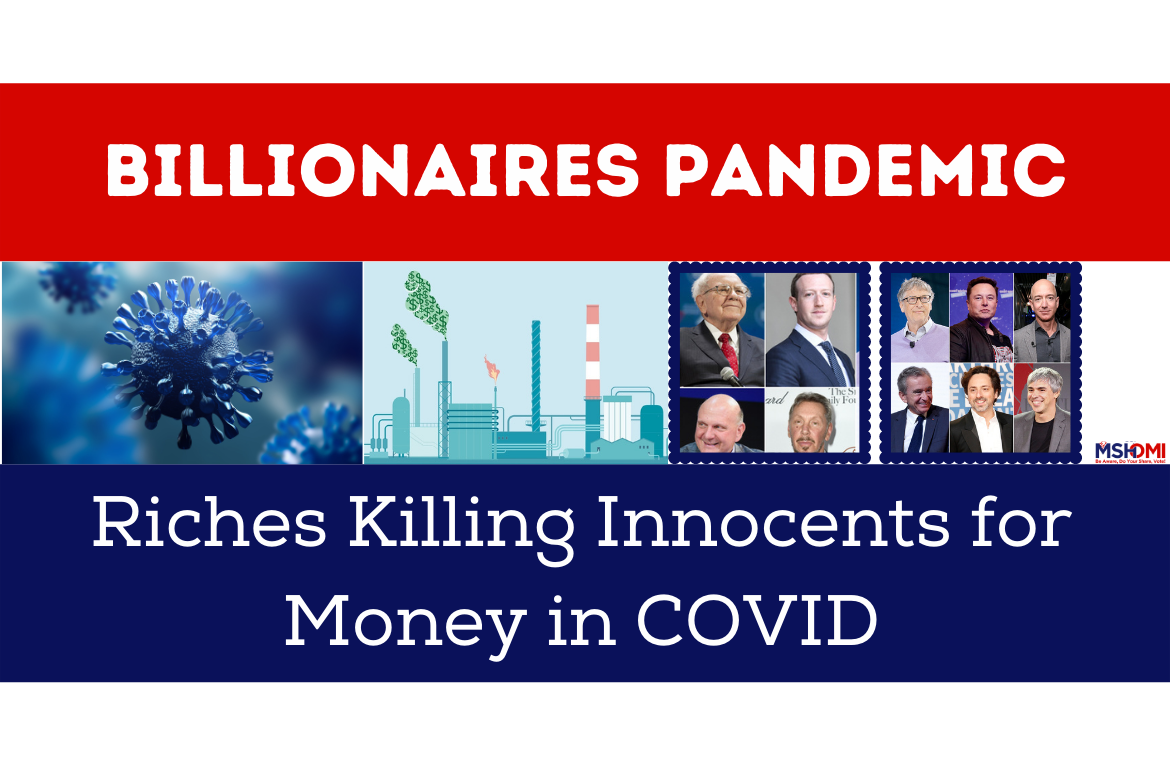 A COVID virus that killed over 5.5 million people with no sign of stopping has created fortunes for some people who have accumulated crazy riches during the pandemic.

The latest report of OXFAM indicated that a new billionaire was created every 26 hours in the coronavirus pandemic, further gapping the global pursuit of bringing equality among the masses, as the poorest of people continued starving to death due to the lack of basic life necessities.

These 5.5 million people died directly due to the virus; however, the indirect death toll reached up to 19 million people, reportedly.

Riches Made Fortunes, and Poorest Starved to Death: The COVID Story

The wealth of the world’s ten largest people had increased by $15,000 every second during the last year, at a time when the same virus left much of humanity vulnerable to death.

While in free-market capitalism, they can justify their gains, the rising inequality is the actual reason for deaths due to the coronavirus rather than the disease itself.

Millions of people died due to the lack of vaccination regimes in poor countries, primarily because of the monopoly of pharmaceutical companies and the hegemony of the rich countries not to allow vaccine production to anyone.

This man-made vaccine inequity is directly responsible for creating unprecedented divisions and bringing more COVID variants to the world that were otherwise not possible.

But this is not the only curse of billionaires’ big money. As most of these billionaires are industrialists, they never care about greenhouse emissions and are polluting the environment in which the global population lives.

Most often, they even lobby against laws that try to cap their dangerous ambitions. This can be seen from the fact that the over-consumption of the top one percent of the richest people is affecting the lives of the bottom 50 percent of the world.

Thus the riches are coming at a price that nobody thought of, and these humanitarian crises have crippled the global peace, for which all the world leaders are joining their heads to find solutions.

Carbon taxes have become a motive of many governments, but no one has been able to produce significant efforts in this regard.

The debate has gone from rich vs. poor to super-rich vs. all. The OXFAM report is an eye-opener for all in this regard, suggesting that this drastic inequality is causing one death every four seconds.

During the time you are reading this article, multiple people have died due to the massive inequality that riches propagated during the pandemic.

The pandemic is a blessing for global billionaires, of which America is leading. In the last year, these billionaires gathered more money compared to the last 14 years combined, and there is no stopping it at all. Countries that are flooding the money from their central banks to mitigate the adverse effects of COVID are indirectly giving more money to billionaires as all of that is going into their bank accounts.

But this is how it is because the system has been orchestrated this way, which demands a drastic overhaul.

Reportedly, almost 3.4 million more Black Americans would have been alive today had their life expectancy been equal to that of white Americans.

And this is no surprise as most billionaires belong to the white clan, which depicts the implanted racism in the social structure of America.

While all of this crisis was fueling the fire, now IMF austerity schemes are likely to worsen the matter in more than 80 countries.

Humanity, which claims to be at the highest level of civilization today, is not considering the deprived people as their own part, which is a death recipe for the whole world.

The deep-rooted problem intensifies when these sorts of problems result in an identity crisis, which ultimately impacts the western nations back.

And when these identity-driven movements start, the originators of these campaigns are blamed once again, which puts all of the blame on the people who are the real victims of it.

Blind hopes of expecting the change from the same system is an equally insane approach.

In societies where taxing the riches has become taboo, a sane approach is needed to save lives in the future that seems to be vulnerable otherwise.