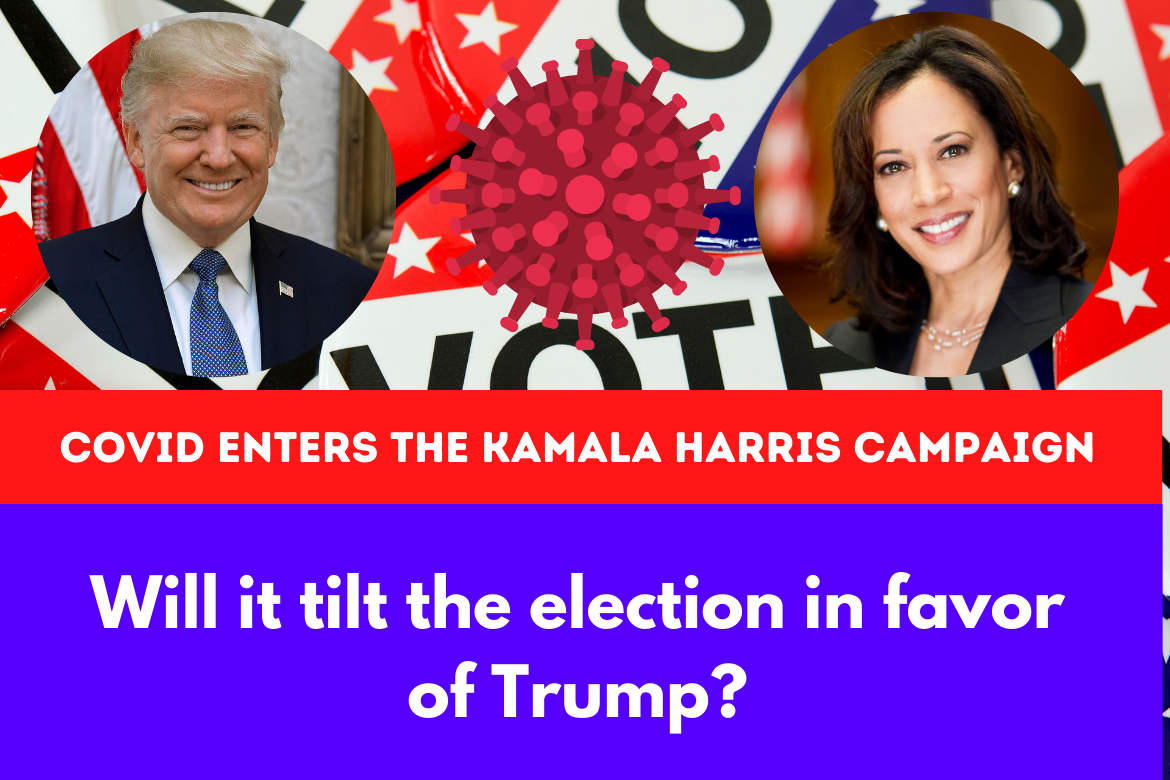 After the White House coronavirus outbreak, numerous government officials, including the Republican-based President Trump, got infected with the virus, resulting in the nosedive of Trump’s popularity, now trailing Biden by sixteen points in the latest polls.

With the pandemic now entering the Kamala Harris campaign, it is expected that Trump can get relief in the upcoming polls, as the Democratic VP nominee announced she would stop her travel campaign after her communications director and a traveling staffer tested positive for the virus.

The party says that Harris will continue her campaign along with her husband, and Trump is expected to accuse Democrats of running the campaign despite the COVID-infected people to get the voter’s attention.

How Kamala Harris campaign stoppage will affect the popularity of the Democrats like it did for Trump?

The central theme of the Biden campaign was and still is to keep the focus of this election on President Trump’s handling of the coronavirus, which has resulted in the death of over 200,000 Americans.

Trump’s failure to come up with national testing and a quarantine strategy, contradicting the public health officials, denying the CDC guidelines, and eventually himself contracting the virus certainly encouraged Biden’s strategy, which is evident in the latest polls.

According to the latest news, two people are now COVID-infected from the frontline Kamala Harris campaign, including a non-staff crew member and Harris’s communication director.

However, the Biden campaign postponed the further travel of the vice-presidential nominee out of an abundance of caution, and she will be campaigning virtually.

With less than twenty days until the election, this decision to stop the campaign by Harris can affect the results of the November vote.

Undecided voters swing between both the candidates until the last moment, and with Trump in action, he can influence those voters, which Harris will not be able to do due to the stoppage of the campaign.

Contact tracing by Democrats: The only way to stop COVID to shatter the Democrats in the last moments before the election

For months, President Trump has downplayed the virus, eschewing basic preventive guidelines like wearing a mask and social distancing. Many of the events held within the White House had little or no precautionary measures.

In early October, he and the First Lady were diagnosed with COVID-19, along with 37 White House staff members.

The roots of the infections can be traced back to the nomination ceremony of Judge Amy Coney Barrett, where COVID protocols were not followed. Similarly, no contact tracing was done by the Republicans.

This inability of the White House to do thorough contact tracing led to a greater number of infections.

Seeing Trump’s approach, it is a great opportunity for the Democrats to do as much contact tracing as possible so that COVID does not dismantle their campaign as much as it did to Trump.

According to the statement released by the Democratic campaign, “The (infected) individual wore a mask throughout their time traveling with the vice president and his accompanying party. The vice president and his team wore N95 masks during the flights.” The statement also clarified that they are also reaching out to the contacts of the individual who tested positive.

In the wake of the Kamala Harris campaign hit by COVID, the Vice Presidential nominee also tweeted that she had two negative tests this week and that she will cancel her travel but will campaign virtually.

Only if the Democrats are able to manage successfully the contact tracing will they stop COVID from dismantling their campaign.

COVID hitting the ranks: An opportunity for Kamala to win undecided voters by leading by example by moving to digital campaign

As soon as Trump got out of the hospital after contracting the virus, he went back to the same rhetoric he has been using for the past few months of this pandemic that the “virus will go away,” and, once again, he started rallies.

The US is reporting nearly sixty thousand new cases and one thousand deaths daily. Kamala Harris and Biden criticized Trump again and again for being too careless regarding public health.

Now, it is an opportunity for Harris to lead by example by suspending all of her political activities and go digital in the campaign by observing the proper quarantine.

Experts believe that the declining popularity of Trump in recent times is primarily due to the ignorant response towards the pandemic as COVID-vulnerable people have started promoting Biden – Harris’s ticket. Now when the Kamala Harris campaign is affected by COVID, she will have a clear chance of winning the voters by leading with examples for those who have not decided anything yet.

With coronavirus impacting the lives of Americans in the masses, the political campaigns have also been shattered. Trump will be more than happy about the recent halt of the Democratic campaign, as it can help him in persuading voters more towards himself.