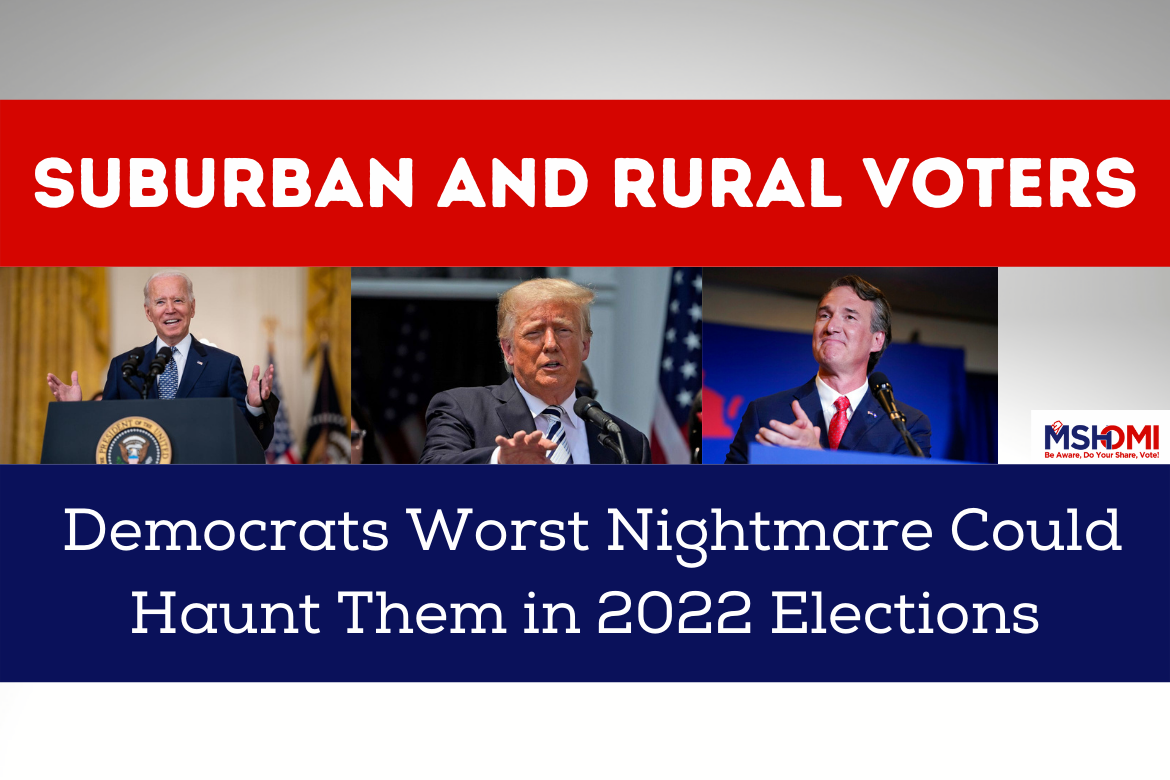 During a presidential debate, Joe Biden taunted Donald Trump that the only way Trump could go to the suburbs was if he took a wrong turn during driving.

He was counting on the ignorance of the former president toward communities other than mainstream cities.  More than one year down the line, Biden is losing the suburban and rural American voters at an unprecedented pace.

The success of Republican Governor-elect Glenn Youngkin in the suburbs, where he fought back territory lost to former President Donald Trump, depicts that the GOP is snatching back suburban voters they lost in the 2020 elections.

Apart from that, he also won by a huge margin in rural areas of the state, drawing high turnout, setting new records for Republican support, and pushing Democrats to record-low voter participation rates in small counties all over the state.

Virginia and New Jersey’s results provide a window into what can be expected in every statewide election, whether for the US. Senate or for any other state office. In a red or purple state, Democrats are required to secure at least 30 to 40% of the rural vote to win statewide. Currently, the party is having trouble securing these votes. It is undeniable that Democrats are losing ground in rural counties as well as many suburbs over the past two decades. Despite this, the party seems unable to provide a solution or show that it is committed to solving the problem.

Many analysts believe that the Democratic Party’s poor performance did not begin with Donald Trump, nor is it all about Trump.  This is more of a transactional problem than an institutional failure on the part of the party to ignore rural America for so long.

However, it is a fact that former President Trump strengthened the Republican Party’s grasp on rural areas by switching scores of rural counties,  including those which had not supported a Republican presidential candidate for decades.

During the last seven presidential elections, Howard County, Iowa, has not voted for a Democratic candidate. This state voted for Trump with 57 percent of its ballots after voting for Obama with 60 percent in 2012.

While Joe Biden won the presidency in 2020, the Trump campaign performed even better in many rural areas, in some cases exceeding both his 2016 percentages and turnout.

As the race for control of the House and Senate seesaws, the GOP’s rural strength gives it an edge.

Democrats have lamented this trend over the years and argued they should be doing better since conservative policies offer less support for rural voters than Democratic policies.

In rural areas, some claim that people support GOP policies for trickle-down economics even though seemingly against their interests.

The Democrats fail to recognize that politics can turn out to be a cultural phenomenon at times rather than a logical one. In the end, most rural voters may not comprehend the severity of climate change and how it impacts people’s daily lives.

Similarly, modernization brings the general public to cities, leaving a conservative crowd in rural areas, which is likely to support Republicans. Politicians and operatives focused on rural voters now say that the Democratic Party needs to wake up. The party’s narrow victory in Pennsylvania, Wisconsin, and other states won by President Biden may be at risk if it doesn’t invest more in organizing and outreach to rural voters next year.

Ohio and Iowa might cede those places in the long run due to recent struggles.

Grassroots advocacy is a mandatory thing to accomplish in rural communities, as not all of them have access to high-quality internet and modern technology gadgets. And the left-wing is famous for its unpopular grassroots campaigns, which ultimately translate into rural voters going red.

According to Ruralorganzation.org, a nonprofit organization, half the population lives in nine states of the US, which means that 18 senators are elected to represent half the country. The remaining half contains 82 senators, largely from rural states.

In many state legislatures, the party will find it harder, if not impossible, to retain the majority. Until Democrats figure out how to stop the hemorrhaging among rural voters, the party will remain in jeopardy.

Urban and rural divisions are real and have widened. Democratic strategists see their future as one that extends from urban centers to the suburbs, with a coalition that is more diverse, younger, and liberal.

The appeal of that rising Democratic Party, however, isn’t always felt by rural voters, and some of what appeals to them even drive them away. That is the dilemma for the party as it decides how to address its rural shortcomings. The other main reason for the Democratic party’s loss in suburbs and rural areas is the lack of infrastructure investment in the region compared to mainland cities.

In addition, the party has only been organized briefly during election campaigns.

As the party spends less in these rural areas and makes fewer attempts to prioritize messaging, the consequences are apparent.

Even if the Democrats were to reshape the party’s beliefs on issues such as civil and reproductive rights to appeal to rural conservatives, which the party has no intention of doing, doing so would jeopardize other critical sections of the Democratic coalition, making the narrative inconsistent and camouflaging the ideological line between liberalism and conservatism.

For Democrats, the good news is that they finally passed an infrastructure bill that would have become law months ago if progressives hadn’t held it hostage.

The party’s other national-level plans could make a positive and significant impact on rural and suburban areas, such as an increase in the minimum wage, a child tax credit, and right-to-repair legislation.

Making the Virginia loss a threshold and emphasizing the messaging in rural areas will help Democrats make significant gains in suburbs and rural areas.