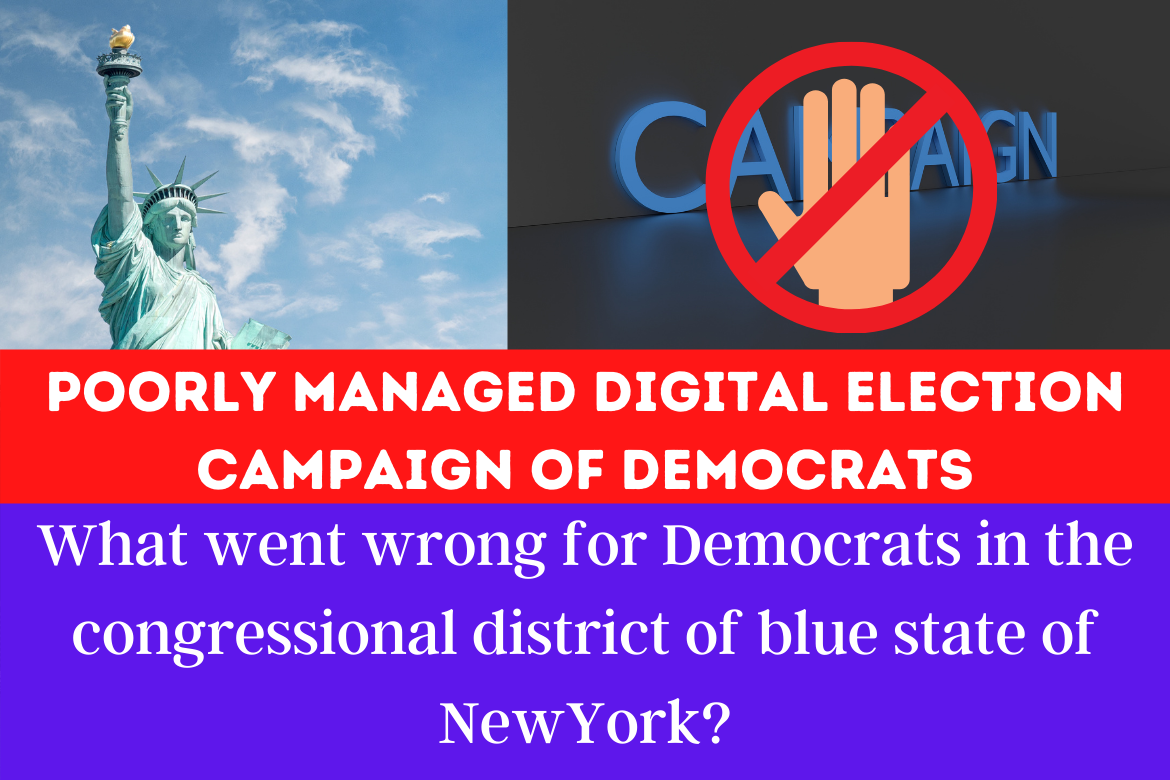 Democrats having a reduced majority in the lower chamber of Congress may be surprising news for many amid Biden’s win. Still, it was inevitable due to their poorly organized digital election campaign. The Democrats digital election campaign cost them a seat in pure blue state New York as Anthony Brindisi lost against Claudia Tenney by a whopping margin of more than 28000 votes.

What went wrong for the Democrats in this Congressional District of New York? The answer is simple; the Democrats digital election campaign was nowhere near the Republicans in the said district. We did an autopsy of digital marketing by both Republicans and Democrats candidates’ websites in the district, and the results are shocking. Let’s see what the numbers are telling us.

Winning votes digitally is a must-do strategy in this era of information and the digital revolution. With more and more people coming online, the lackadaisical approach of the Democrats digitally cost them many seats in the 2020 elections, which is evident from the results.

Alexandria Ocasio-Cortez (AOC) rightly iterated this thing recently as she said that Democrats have poor digital strategy compared to Republicans. This may be surprising news for many, as people consider Democrats the founders of the digital campaigns in US politics. Obama won the presidency twice, mostly due to his rigorous digital election campaign. That’s why AOC reiterates that “I believe that there are many areas that we can point at in centralized Democratic operations that are extraordinarily weak. For example, our digital campaigning is very weak. This is an area where Republicans are actually quite strong.”

She further added that “I believe that many Republicans were very effective at digital organizing strategy as well, whereas the Democratic Party is still campaigning largely as though it’s 2005. And I know a lot of us don’t want to hear this, but 2005 was 15 years ago. So, we can do better.”

She also added that she offered help for digital campaigning to many candidates, yet they refused, and many of them faced the brunt of the voters.

The social media statistics in this Congressional district also tells the same story. The pervasive presence of the Republicans on social media helped their digital election campaign and can be seen by the following data analytics. Republican candidates made the public narrative according to their own version of the truth, and people believed their narrative. Let’s analyze the social media digital political campaign of both of these candidates and how it affected the election result.

Democrats lost this seat by a margin of 28000 votes, as their digital marketing campaign for winning votes was not well-planned at all. This defeat was avoidable with a little bit of digital attention by the Democrats.

The things actually worsened for Democrats when their Republican rivals were campaigning digitally with exceptional zeal. All the numbers mentioned above (both digitally and socially) can depict how well the Republican candidate’s campaign did digitally to win the votes and hence the race. A well-organized political campaign would have won this seat for Democrats.