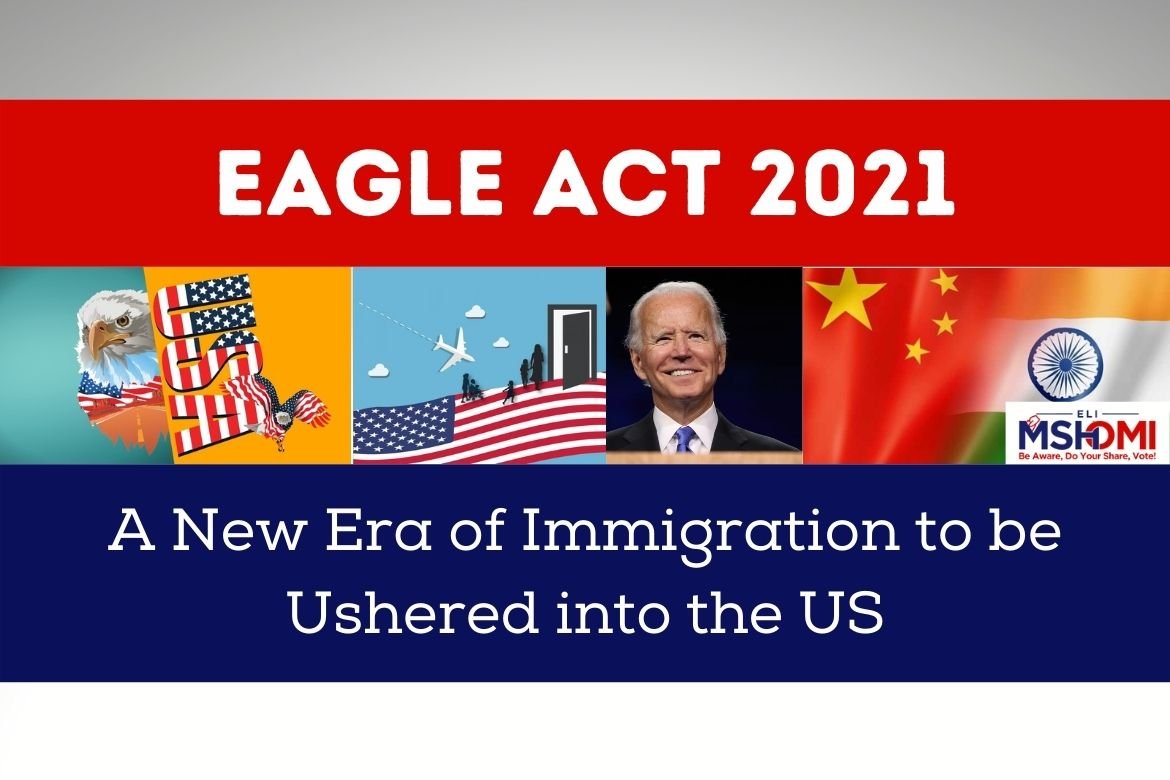 Immigration has been a hot-button issue in the US, with both political parties walking on diverging paths. However, the assertiveness of Republicans made it difficult for immigrants to get settled in the US.

Now, with the bipartisan agreement reached in the form of the  Equal Access to Green Cards for Legal Employment (EAGLE ACT), this issue seems to go in the right direction.

Addressing the Employment-based Visa Issues: EAGLE ACT is the Solution

The most significant achievement that could come out of the Eagle Act is that it could address the employment-based visa issues.

Many professional foreign workers are working inside the United States on non-immigrant visas such as H1-B visas or L-1 visas and aspire to get a green card and become permanent residents of the country and contribute to its prosperity.

However, there is a 140,000 employee limit per year with a country limit of 7%. The 7% limit is a huge problem for professionals from populous countries like India and China who have to wait for decades to become US residents.

The EAGLE Act aims to remove the per-country limit and introduce reforms in the employment-based visa system.

Many attempts were made in this regard, including the Fairness for High-Skilled Immigrants Act of 2019 (HR 1044) and the High Skilled Immigration Act, but all of them failed because Congress failed to reach an agreement.

However, the EAGLE Act could prove to be a success for several reasons, primarily because it is a bipartisan effort introduced jointly by a Republican and a Democrat.

Secondly, Democrats have the majority in both the Houses with the occupation of the executive branch. As many Republicans endorse this act, bypassing the filibuster limit does not seem a big problem.

Additionally, the elimination of the phrase “Association of Chinese Military and Communist Party” could also prove to be a breakthrough, as it was one of the most significant objections to previous attempts in this regard.

The bill also limits the H1-B and H-4 visa applying for the green card during the nine-year transition period, which is also a good thing considering the objections raised by Republicans on previous such bills.

Nevertheless, having the H1-B part is quite tricky because it could limit the functioning of outsourcing companies that could try to lobby against the bill for changes to these clauses.

Uplifting International Talent in the US: The Motto of the EAGLE ACT

Professionals from across the world see the United States as the land of opportunity, but they have been facing many problems in entering the country.

The main problem is that the United States is facing a general shortage of employment-based green cards, and all applicants face at least some kind of delay in securing a permanent visa.

Even though the employment-based applicants live in America without having the fear of getting thrown out of the country, there are still plenty of things they cannot do.

They cannot become entrepreneurs and start new businesses that could create jobs for the American people.

Most importantly, they are unable to visit their home country, as there is always the risk that they will be held back from returning to the United States.

They could not get promoted no matter how talented and hardworking they were. Promotion could only be attained after starting over in the employment-based green card, and workers also could not change jobs or employers.

They also have to secure a student visa for their children once they turn 21 or could face forced deportation despite living in the country for decades and paying taxes as an ordinary citizen.

The EAGLE Act could be a one-stop solution to all of these problems.

This act will provide these workers for the first time in the history of the United States with the statutory bar against business visas at work.

This will also allow the Department of Labor to set a fee to regulate the H1-B workers’ program instead of it being an under-funded mandate right now.

Employers that had an excess of foreign workers, i.e., more than 50 percent of the workforce, will not be able to allow any more foreign workers to ensure the balance of American workers.

It will also make it illegal to advertise jobs as “only available to H1-B visa holders” to ensure that foreign workers are not prioritized over the American workers.

This could solve the persistent crisis of too many job openings that could lead toward economic destruction otherwise.

The only argument that Republicans had against providing green cards to foreign workers was that they were eating up the American jobs meant for the American people.

This act will guarantee the safeguarding of American jobs while also providing foreign citizens with the opportunity to start their careers in the United States and contribute to the economic uplift of the country.

EAGLE Act will Refine Immigration Doctrine in the US

The assumption that the  EAGLE Act will only provide rights to skilled immigration is not completely accurate because it will also influence other aspects such as the Adjustment of Status, Dependent, and Employment Authorization Document (EAD) provision.

This act will speed up the adjustment of the status of 1-485 applications. This means that if a foreign person working on an H1-B visa is applying for adjustment of status, his dependents, including parents, wife/husband, and children, will also qualify for the green card.

Any work authorization application submitted for the green card will include the bona fide job offer known as 1-485 Supplement J that will be needed to adjudicate the application.

The 1-485 Supplement J is used in connection with filling the new 1-485 application to a new employer or job offer. This confirms the job offer, informing USCIS with 1-485 porting cases under AC21.

EAGLE Act is a Tool for Diplomacy for the US

The skilled immigration laws in the United States are mostly affecting professionals from India and China, the top two populous countries in the world.

Due to the huge population density, the workers from these and other populous countries have to wait for decades to get their green cards, while workers from less dense countries could easily get them in no time.

Eliminating the 7% country cap will remove the limitations in the current laws that force workers, especially from these nations, to spend decades as an outsider in a country where they work and contribute to its economy.

Apart from addressing the challenge of workers from populous countries like China, the EAGLE Act will also strengthen American diplomacy and leadership in the strategically important Indo-pacific region.

The act will provide the country with the tools needed to protect American interests in the Indo-pacific region by strengthening the engagement with strategic allies such as India and establishing people-to-people engagement with Southeast Asian regimes, most of which are densely populated.

The EAGLE Act was introduced at a time when the Biden Administration was working to promote the establishment of a Quad Intra-Parliamentary working group that will work to promote ties between legislators of countries like the United States, Japan, Australia, and India, the key partners with shared values of interest in the Indo-Pacific region.

The EAGLE Act is strategic legislation that is not only an immigration bill but comes with several other strategic gifts that will protect United States’ interests all over the globe in a subtle yet efficient way.