Reforming Electoral Count Act: Urgency to Stop the Next January 6 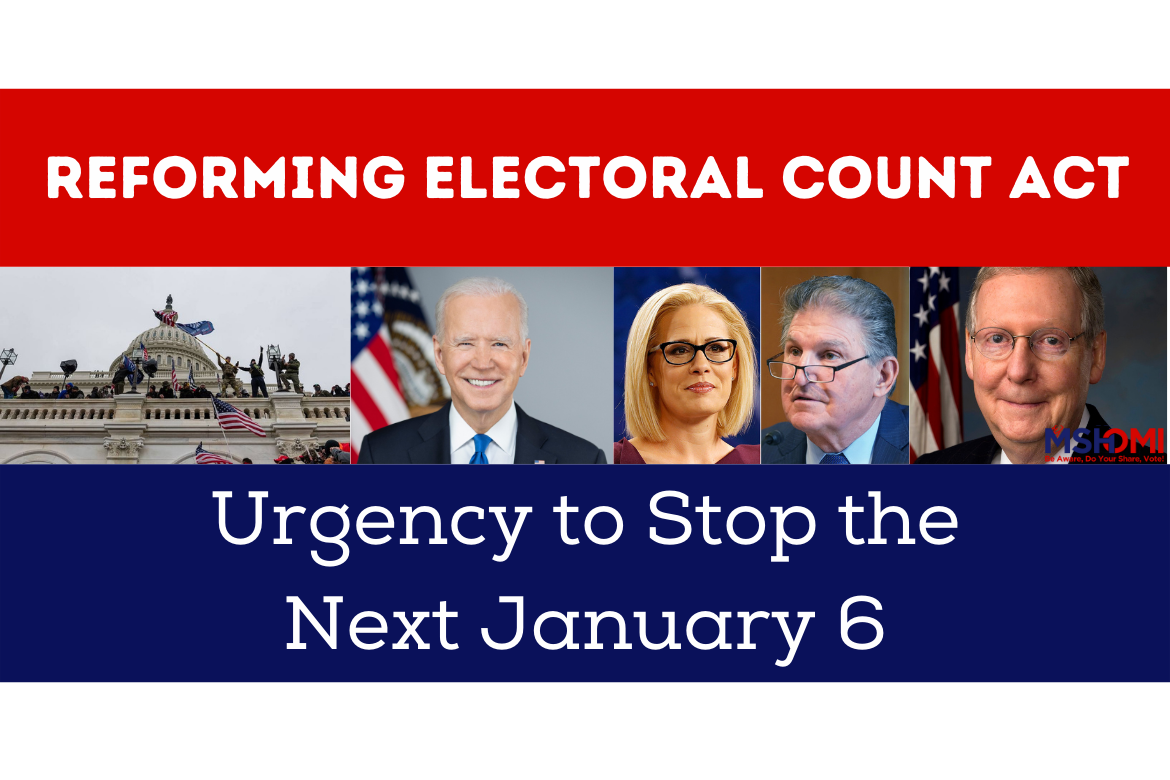 Congress has passed precisely zero legislation to prevent another attack on the U.S. Capitol building one year after the attack. A committee is examining steps that could be taken, but its work has not yet been completed.

The move comes a year after a large number of Republicans protested President Joe Biden’s victory being certified ahead of an attempted coup.

Senators Sinema and Manchin expressed interest in working together on a bipartisan bill using the Electoral Count Act revision.

But most Democrat lawmakers are advocating for more comprehensive election reforms and federalizing elections after this recent move from Senate Minority Leader Mitch McConnell, who Democrats believe is attempting to divert attention away from their work on far more substantial electoral reform.

Nonetheless, in a brief interview, the GOP leader stated that he would be open to considering revisions to the 1887 legislation that permits members of Congress to contest election results.

It remains far from certain what changes would be supported enough to pass through both the House and Senate. But some lawmakers from both parties believe more modest reforms are possible. Many centrist Democrats and some Republicans endorsed working on the Electoral Count Act. Senate majority leader Chuck Schumer has denied calls to reform the electoral count act, and he believes that passing other voting rights legislations are crucial to save American democracy

Electoral Count Act – What Is It?

There is a very limited role for Congress when it comes to choosing the next president. The Constitution stipulates that states have complete control over how elections are conducted. States, on the other hand, report their results to Congress once they have determined which candidate won.

The task of Congress is to simply count each state’s electoral votes and declare the presidential election winner.

The only thing that remains afterward is for the future president to take the oath of office. The 140 years old Electoral Count defines what Congress should do if there is a dispute over the candidate who won in a state.

On January 6, 2021, Trump supporters invaded the Capitol while Congress was certifying those results.

That night, amid broken windows and shattered glasses, lawmakers returned to affirm that night that Joe Biden had secured enough electoral votes for the presidency.

Now that a year has passed since the Capitol Hill attack, lawmakers want to change the law to address the issue.

Democrats are pushing for broader electoral reform; they’re hoping to establish a holiday for Election Day.

To do so, they’re discussing weakening the filibuster, which Republicans understandably see as a significant danger to their ability to obstruct Democratic legislation.

Chuck Schumer, the Senate majority leader, has already dismissed calls to only amend the Electoral Count Act rather than pass other legislation. He has threatened to modify the rules in the event of another GOP filibuster led by McConnell.

In an attempt to win over 10 Republican Senators, the Democrats may amend the Electoral Count Act as part of a larger electoral bill. Senate Democrats intend to take votes on these election laws by Martin Luther King Jr. Day. Some sensible decisions from Mike Pence saved America from absolute chaos and he could have made matters worse on January 6 by contributing with Trump in his stop the steal nonsense.

The Need of Electoral Count Act: Time to Save American Democracy

Senators have proposed a law that explicitly states a vice president cannot challenge election results in the Electoral College.

It was the result of Trump’s encouragement of then-Vice President Mike Pence to use his ceremonial role to challenge election results in key battleground states privately and publicly.

During the phone call, he pleaded with Georgia’s secretary of state to determine the precise number of votes he needed to win the state. In Wisconsin, he continues to show his support for lawmakers who are still working to overturn his election loss.

All this activity occurs despite the fact that there were no disagreements among states regarding how the votes should be counted in 2020.

Trump and his allies still tried to twist the law to claim that the vice president, who is responsible for certifying the next president, could simply reject state electors. At a rally days before January 6, Trump said, “I hope Mike Pence comes through for us.” Only one GOP senator Lisa Murkowski is supporting the voting rights bill of Democrats but Biden needs more people on board.

The Republican Party opposes the Democratic Party’s proposals almost unanimously. Thus, broader reforms of the voting system are unlikely to come to any sort of agreement.

In fact, Republicans in important areas have been pushing legislation to make voting more difficult, and Trump is endorsing people who claim the election was rigged to run future elections.

On changing the Electoral Count Act, Republicans are saying that Democrats should also be held accountable if they blow this opportunity.

So far, there has been only one voice in support of voting rights legislation, Sen. Lisa Murkowski, and that is not enough to overcome a GOP filibuster in the Senate.

It seems unlikely that Republicans will get on board with other significant changes to elections.

Voting reforms are a hot debate in America these days, with President Biden himself pushing to end the filibuster to pass two stalled voting rights bills from Congress before the midterm elections.

The role of Congress in certifying winners is perfunctory. Any other interpretation of the Electoral Count Act would be incorrect.

Democrats argue that the Electoral Count Act is no alternative for stronger voting rights legislation to prevent bad actors from attempting to rig elections in states; they insist that more extensive voting rights measures are needed.

In 2020, Trump’s allies only succeeded in getting Congress to debate whether Arizona’s votes were valid.

At that time, the Capitol was attacked by rioters. In the wake of the riot, 139 Republicans in the House and eight senators voted not to recognize the results in Pennsylvania, despite the state having certified its electoral votes to Biden.

At a time when the threat of a military coup after January 6, 2025, remains real, reforming the Electoral Count Act has become even more important.

It should be self-evident that something has to be clarified and that a vice president should not be forced to say no to the president.

Legislators could repeal the Electoral Count Act altogether. Due to the polarization of politics these days, both parties might try to overturn a House or Senate election using the law in the future. A power like this should not even be in the hands of Congress.

Omicron Variant: A Blessing in Disguise for America

US Innovation and Competition Act: Now or Never...