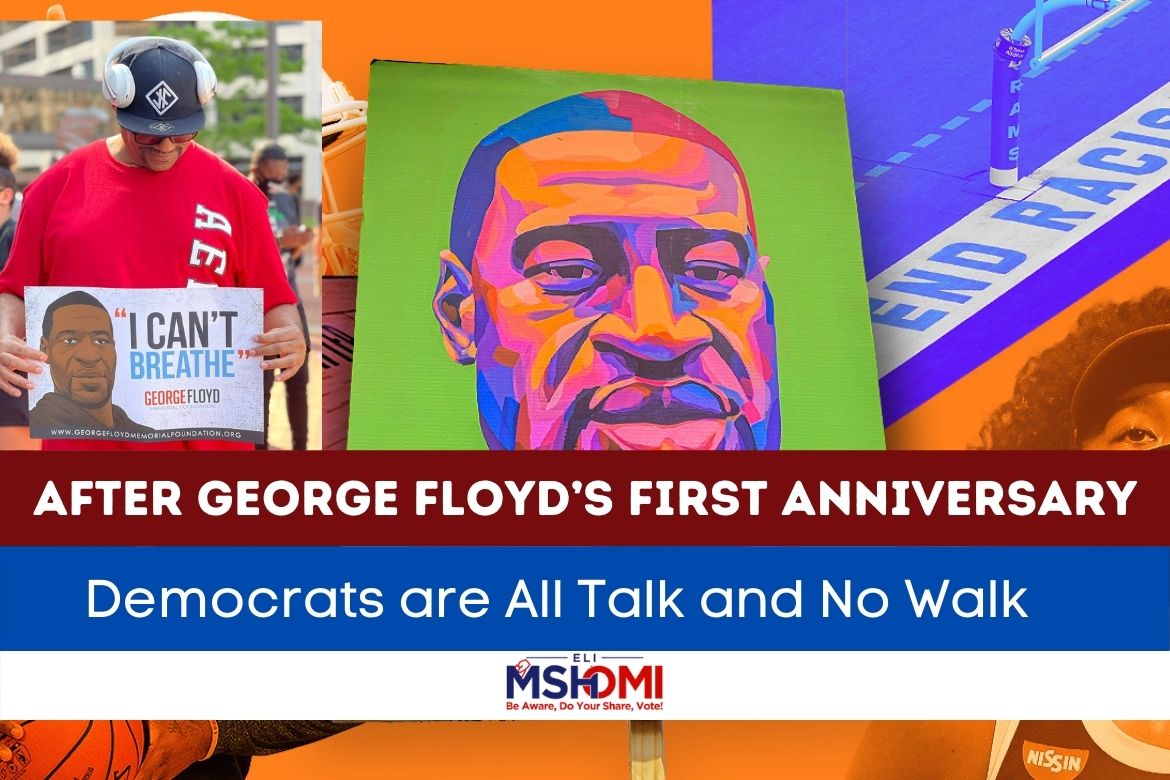 One year down the line from a cruel event of strangling George Floyd to death, the systematic reforms are yet to be made.

May 25th, 2021 marks the George Floyd anniversary, but police reforms are still a pipe dream, as no significant effort has been made in this regard.

Although Biden self-imposed the deadlines for the passage of various crucial bills in Congress, including the George Floyd Justice in Policing Act and the American Jobs Plan, the inaction of Congress has not actualized the Biden talks yet.

Somehow, bipartisanship is missing in American politics when it comes to giving relief to Black Americans.

As Biden invites the George Floyd family to the White House on George Floyd anniversary, he needs to exercise his authority over Congressional Democrats to expedite the anti-racial legislations.

The anti-Asian hate crime bill was passed by the US Senate by a whopping margin of 94-1, while it passed the House by a 364-62 majority.

However, when it comes to the protection of Blacks, the lawmakers are somehow not as ambitious as in the other cases.

To date, the provision of qualified immunity given to police officers is the biggest hurdle in passing the George Floyd Policing Act.

As Congress gathers for debate on the bill on George Floyd anniversary, any effort is bound to be in vain, as a vote on the bill would still remain a pipe dream.

Probably the Biden administration assumes that Black Americans are on the bottom in the racial hierarchy, which justifies him not to enforce his own imposed deadlines.

Whether or not President Biden takes credit for the Derek Chauvin verdict, it was a judicial victory and not the executive one.

The signing of executive orders and obviously the legislation would be translated into Biden’s and Democrats’ victory, for which they can be proud of.

George Floyd Anniversary: Biden is All Talk and No Walk

Democrats, including Biden, are all talk and no walk, which is further marginalizing the Black community. The same Democrats who built and carried their election campaigns on George Floyd’s death are somehow hesitant to pursue the cause.

It was due to George Floyd’s death that Black Americans voted for Democrats in large numbers in the hope of justice and favorable treatment in the upcoming times, but the inability of the federal government is unable to provide any of those remedies.

Biden needs to understand that now he is in the government, and the efficiency of the government is gauged by actions and not speeches.

Passing one act is better than one hundred speeches delivered behind the podium. Even he can explore seeking Republican unity to assure them cooperation on other avenues so that Black lives can matter, and the sacrifice of George Floyd does not go in vain.

However, seeing the prevailing trend, it is easy to foresee that he has no solid plan to pass the Policing Act anytime soon from Congress.

The legislation will remain in the pipeline until Democrats compromise and remove the bone of contention, i.e., the qualified immunity provision out of the bill.

Biden also should not commit to deadlines he can’t achieve because it will further deteriorate the credibility of the government.

Even the deadline of the American jobs plan, i.e., Memorial Day, is expected to be missed by the legislature.

So, offering these types of unrealistic deadlines will just push Biden into further hot waters.

In fact, this inaction at the end of the federal government is encouraging other police officers to perpetrate violence, which can be seen in Daunte Wright’s murder and not even flattening the tire of a white man who fled police after committing a crime in Minnesota.

Racial justice is the need of the hour so that everyone living in the United States can feel safe and secure without feeling any racial trauma.

Even after worldwide movements against George Floyd’s death, Blacks today feel more estranged. This time the racism is even more pervasive in every avenue, including technology, voter suppression, and job discrimination.