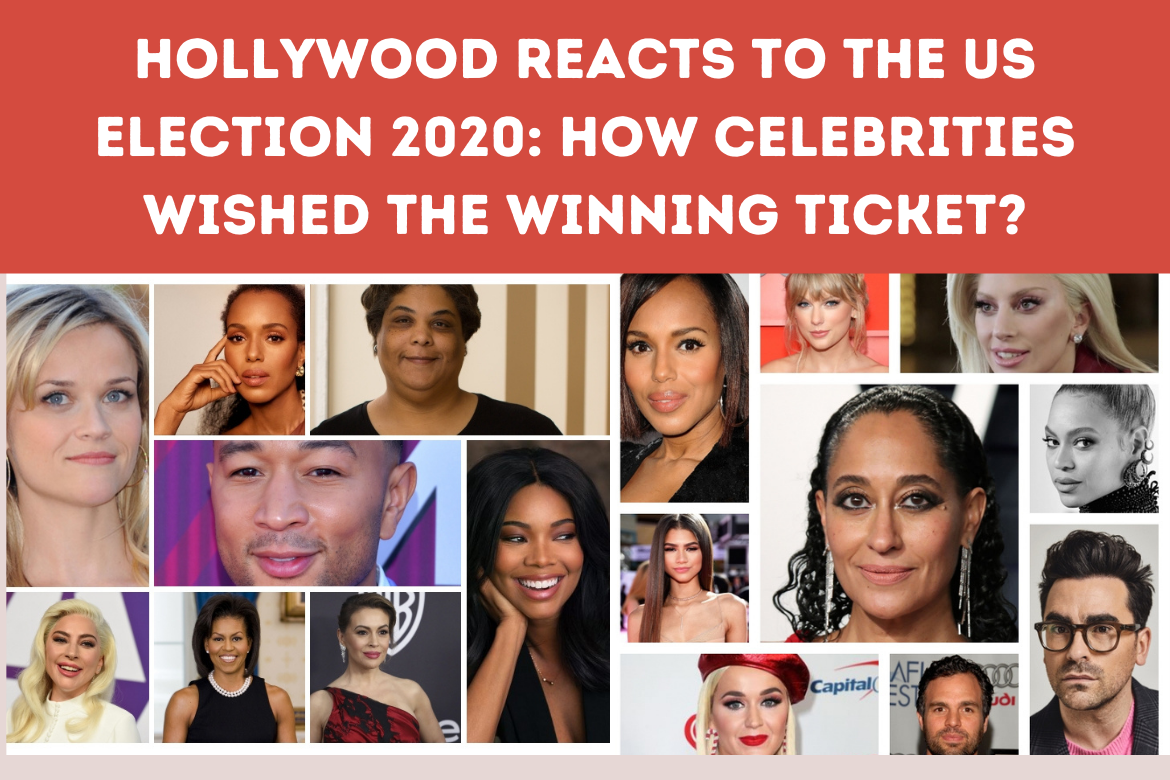 As soon as the news of Joe Biden’s victory in the presidential elections came out, different celebrities from Hollywood reacts to the US elections as they took to their social media handles to congratulate President-elect Biden and Vice President-elect Kamala Harris.

Although official results are not out, the considerable lead of Joe Biden makes it clear that he is the 46th president of the country. After Biden defeated incumbent President Donald Trump in Pennsylvania, many news outlets started to refer to Joe Biden as President-elect.

Hollywood reacts to the US election as celebrities used their social media handles to congratulate the winning team in their unique ways. Some used a direct approach, other used gifs and stickers to extend their wishes, some expressed their excitements in videos, and some joined street celebrations to welcome the new president. While the results are clear, President Donald Trump is still reluctant to concede and claims that the elections have been won by Biden through fraud and mishandling.

In this article, we will explore how  Hollywood reacts to the US Election. in 2020. We will be bringing to you the reactions of different celebrities on the victory of President-elect Joe Biden and Vice President-elect Kamala Harris. Vice President-elect Kamala Harris has a huge fan following in Hollywood. Throughout the election campaign, many celebrities stood behind Harris and supported her to make history. Harris will be the first-ever woman of color to hold the position of Vice President in America. Celebrities see her as a leading figure that will bring power to women in America.

Michelle Obama expressed her excitement in a Twitter message where she wrote that she is thrilled to see “our first Black and Indian-American woman Vice President” while mentioning Harris and Biden.

Gabrielle Union retweeted a video of Kamala Harris in which Harris is calling President-elect Joe Biden and telling him, “we did it.”

Lady Gaga extended her love to the “1ST female VP elected to the White House” in her tweet.

Alyssa Milano shared a portrait of Kamala Harris with the caption, “For every little girl.”

Kerry Washington thanked the voters for supporting Harris and Biden.

Reese Witherspoon termed the election results as a “tremendous moment” in the history of America.

John Legend congratulated President-elect Joe Biden and his running mate Vice President-elect Kamala Harris on their victory and thanked them for choosing to serve the country in such times. Every Vote Counts, Celebrities Urge Voters as Hollywood reacts to the US elections:

During the election season, many Hollywood celebrities urged their fans to use their right to vote, and after the election, urged them to stay calm and wait for the election results patiently.

Mark Ruffalo, popularly known as “The Hulk,” reminded voters that due to the increased numbers of absentee ballots, election results could take more time than expected.

Kerry Washington appealed to her fans to share a message that urged Arizona voters to stay in line to vote.

Dan Levy expressed his gratitude for the poll workers for fulfilling their duties in spite of harsh conditions.

Tracee Ellis Ross urged the voters of the swing state of Minnesota to “make their voice heard” and come out to vote.

Many other celebrities shared the information on vote count and election results while expressing joy over Biden’s victory. Beyonce, Zendaya, Taylor Swift, and Lady Gaga urged their fans to vote and stay calm no matter who wins. After supporting Kamala Harris in a campaign rally one day before the election, John Legend spent Election Day impatiently waiting for the election results. He shared several posts on social media concerning election information and vote count. As soon as Biden’s victory was clear, the American singer and songwriter came out on the streets along with his wife Chrissy Teigen and two children. The family was seen sitting on the top of a car being driven out of the crowd in a royal parade style. Many in the crowd made videos and posted them on social media as they went viral in a few minutes. Pro-Trump celebrities from Hollywood reacts to the US elections:

Hollywood is also full of those Hollywood celebrities who want to see Trump serving another four-year term.

Jon Voight, the Oscar-winning star for his classic flicks like Midnight Cowboy, is a life-long supporter of Donald Trump and has been urging his fans to vote for Donald Trump. Other celebrities like Kirstie Alley and Kevin Sorbo have been busy promoting the Trump rhetoric of election fraud and legal lawsuits against election results. Kirstie made several tweets spreading skepticism about the election results. Dave Chappelle reiterated the role of the nation:

Dave Chappelle has a tradition of coming live on Saturday Night Live after  Election Day. He did the same in 2016 and has now repeated it in 2020.

Chapelle spent more than fifteen minutes on stage to explain to the audience that no president can save the country unless we help each other out in such challenging times. Then he spent the rest of the time in political criticism of the Republicans and Democrats.

The message was loud and clear that, as Americans, we should take responsibility and do not need to wait for help from the government. We should extend a hand of hope where we can.

The 2020 election recorded the largest voter turn in the history of the country. The country was going through the challenge of COVID-19, so voters were urged to vote through mail-in ballots.

The increased number of mail-in ballots lead to the flooding of ballots, eventually delaying the official election results. The official results are not yet out, as a few states are still counting their votes. The latest results show 290 electoral votes for Joe Biden, making him the President-elect.

In the 2020 presidential elections, Hollywood played an important role as celebrities urged the voters to participate in the election.

The awareness campaign from these celebrities proved to be very helpful as the voter turnout this year was record-breaking.

After the result was clear, these celebrities took to their social media handles to congratulate Joe Biden and his running mate Kamala Harris for their victory. While Trump is still reluctant to concede, some celebrities are supporting him for his decision.