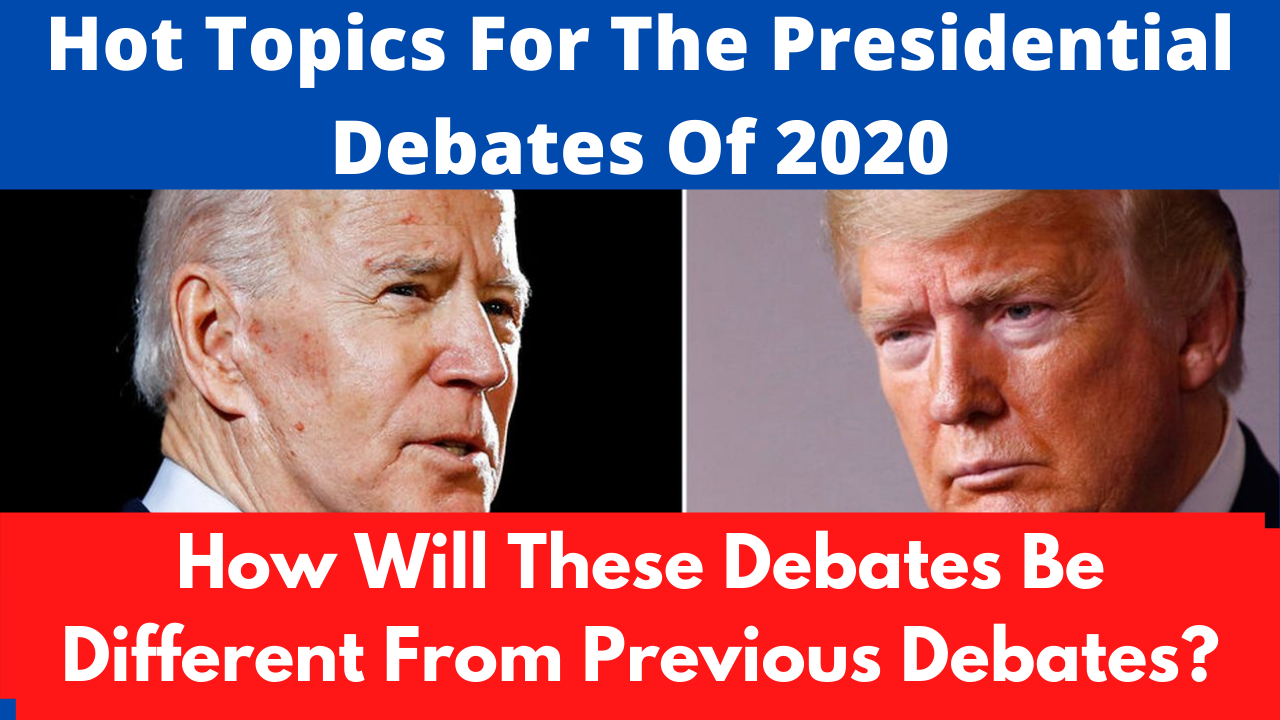 Economy, healthcare, pandemic, foreign policy, and Supreme Court appointments are likely to dominate in the presidential debates of 2020 and can attract voters. With the nosediving economy, increasing fatalities from COVID-19, an imminent globalization crisis amid the Sino-US trade war, and the Afghan war coming to an end, the global as well as the domestic concerns of the USA are changing, and so will be the direction for the presidential debates of 2020 that are just around the corner.

Surveys suggest that more Americans than ever will be voting in the 2020 presidential elections based on the economy and rising unemployment. Some topics for the presidential debates of 2020, and the responses that can affect the campaigns of both the presidential nominees, are:

The economic recession during the coronavirus crisis is the worst since the Great Depression, according to reports of the United Nations.

As reported by Pew Research, nearly 79% of Americans opined that they would consider the economic situation of the country while voting in the presidential elections of 2020.

This makes the economy one of the hottest topics for the presidential debates of 2020.

The unemployment rate in the USA, due to the pandemic, rose to nearly 14.7% in April. The results are improving with the opening of the economy; however, the surging unemployment ratio is likely to affect the presidential debates of 2020 that will start from September 29, 2020.

By now, the United States is the most affected country in the world due to COVID. This outbreak has instigated the health crisis in the country, as nearly 68% of voters said that they would consider the health care issue while voting in the presidential elections. It means that both presidential nominees have to convince the voters about their policies regarding the health care system, and this will become one of the most interesting topics to watch during the presidential debates of 2020.

COVID-19 crisis amid presidential debates of 2020:

In recent times, violent crimes have been raised by manifold in the USA. For instance, during the pandemic, Chicago observed a 52% rise in homicides compared to the pre-pandemic days.

This is an alarming situation, as most of the incidents were directed against people of color. This deteriorating situation of law and order is one of the main reasons why 59% of Americans said that they consider the issue of violent crimes while voting in November. Similarly, 55% of Americans said that they would be voting considering the gun laws.

Unfortunately, the receding economy, surging pandemic, and the deteriorating infrastructure are not the only things to worry about in 2020.

This year also saw a dramatic increase in violent gun crimes and mass shootings. According to the reports, almost 305 mass shootings have been reported in 2020 across the country. This is why discussing violent crimes and gun laws can be the need of the hour amid the presidential debates in 2020.

While on the one hand, America is preparing to exit Afghanistan after twenty years-long war; on the other, it is on the verge of an economic war with China. Be it the trade war or the increasing trend towards budget-cutting of funding for international organizations, the USA’s foreign policy is changing.

The confession of 52% of Americans that they will vote based on race and ethnic inequality is not surprising amid the crisis of George Floyd’s murder. As the nation observed countrywide protests, this will be one of the hottest topics to be discussed in the presidential debates.

The prevailing supreme court crisis has just entered the new phase as Trump nominated Amy Coney Brat as a successor of Ruth Ginsburg. With all of this happening, the supreme court issue is likely to dominate the upcoming debates.

While Biden will urge the Senate not to approve the nomination, Trump likely to cash on this opportunity by saying to the voters that he just made the great decision by nominating a new judge.

He will try to pursue voters that not nominating the new judge could have detrimental consequences on the US political infrastructure, making this issue a hot issue for the presidential debates of 2020

Other topics to see in the presidential debates include economic inequality, immigration, and abortion laws, and the future of Obamacare as Trump said that Obamacare will be replaced by the new program with the help of the Supreme court.

Any candidate having a strong command over these hot issues can win the presidential debates of 2020 easily, which can have a profound impact on the results of the elections too.