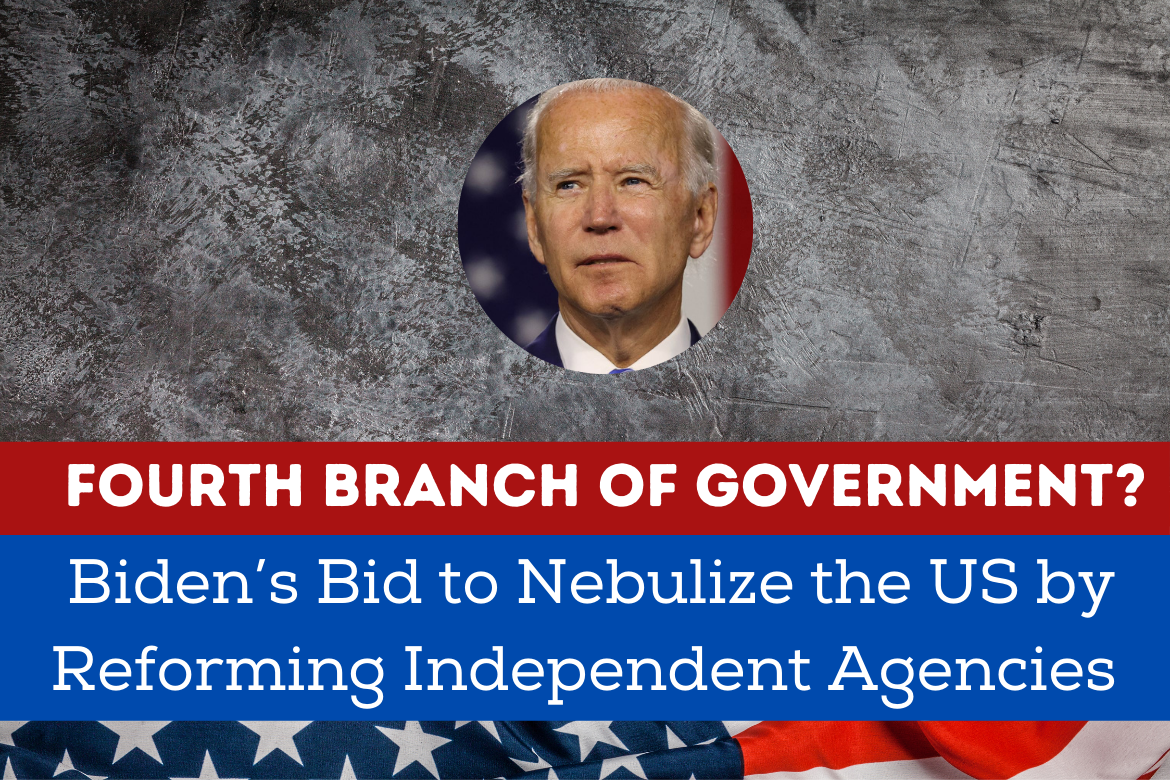 During his presidential campaign, Joe Biden put major focus on the economic infrastructure and the deteriorating healthcare sector, but he did not mention the equally important bureaucratic reforms necessary in the United States.

The modern government machinery demands that the proper independent institutions be led by efficient bureaucracies to assist the people.

Unlike the executive branch, these branches are not elected by the general American public, so they are not answerable to them.

This phrase “fourth branch of government” first emerged in the 1930s as a criticism of FDR’s New Deal.

In the current governmental setup, the Central Intelligence Agency (CIA), US Commission on Civil Rights, and Environmental Protection Agency are prominent examples of these independent federal agencies.

How can Biden reform these independent agencies, and what role can Congress play in this regard? Are these agencies still relevant? Let’s have a look.

Interestingly, these independent agencies hold a combined power of the executive, judiciary, and legislation. It means that they can prosecute, legislate, and take decisions on their own.

They work on their own laws. For instance, the Environment Protection Agency can formulate and enact rules regarding the limitation of pollution.

These agencies were given power, in the beginning, to ensure that they could carry out the job smoothly without any legal complications that might become an obstacle. But, the government at that time embedded so many powers in these agencies that they are regarded as the fourth pillar of government today. The administrative agencies are given independent legislative powers because there are certain areas where Congress might not have the expertise required for the continuity of development.

For example, in communications, the environment, or aviation, Congress might not have members who have sufficient expertise in such matters because Congress is mostly filled by politicians and not businessmen or scientists.

Similarly, the affairs of these agencies are changing at a rapid pace so, Congress cannot legislate for them on an urgent basis regularly.

The discretionary powers tend to insulate these agencies away from politics and ultimately increase their efficiency and speed to carry out a job.

So, these independent agencies are still relevant, and the US could not breathe without them. However, it is time for the Biden administration to reconsider their roles in the US. How Can the Democratic-led Congress Control Independent Agencies?

As Congress is the legislative branch of the government, it is also entitled to create these independent agencies. Not only this, but Congress can also increase or decrease the powers of these agencies.

Similarly, as the budget manager of the United States, Congress also funds these agencies. So, it is the sole jurisdiction of Congress to oversee the budget that these independent agencies are consuming.

Subject to the loopholes in the fundings, Congress must revise the budgets for these agencies at their earliest convenience to save the United States from the already severe financial crisis amid the pandemic.

In today’s setup, these agencies are being given sweeping powers in the US, which is also endangering the doctrine of separation of powers.

The Constitution of the United States allows Congress to establish federal courts. To speed up the process, Congress can also make special courts to reconsider the authorities given to these independent agencies.

Similarly, Congress can break up some of the bigger agencies into smaller parts to further dilute the powers concentrated in just a few hands.

The rule-making process for these agencies should also be revised. Congress can change the rule so that every new change under any agency must pass from the Congress before becoming law.

As Congress is the elected body, it should have the final say in the legislation, or the purpose of the legislative branch will perish.

Similarly, the Democrat-led Congress must revisit the jurisdictions of these independent agencies to make them more efficient.

Biden’s Bid to Reform the Bureaucracy of the United States

Unlike executive agencies, the president does not hold direct authority over the independent agencies.

Similarly, the leaders of these agencies are not members of the Presidential cabinet. So, the president exercises limited authority over them.

By complying with the statutory requirements, President Biden can remove the heads of these independent agencies based on their incompetence and negligence towards duty.

As the situation stands now, Biden should oversee all of these independent agencies on an urgent basis to replace the incapable heads serving the departments that were appointed to serve the interests of the former President Donald Trump.

Not only the heads but the commissions also play a crucial role in the official matters of these independent agencies. The commission members are next to the head in importance, as they have a significant say in the affairs.

As these members are appointed for a term of four years and retire turn by turn, President Biden must strive to select competent people for the appointments that will come in the next four years.

As Democrats have the Senate majority, they can easily do it subject to the unity among the Democratic Senators.

They will have to win the Senate again in 2022 if Biden wants to appoint people of his choice in these independent agencies in his last two years of presidency.

The fourth branch of government comprises independent agencies that are not accountable to the general public directly.

These agencies are responsible for serving the interests of the people of the United States with the help of the powers given to them by Congress.

President Biden must revisit the profiles of the leaders of these agencies to make sure that only competent individuals get the command of these all-important agencies.