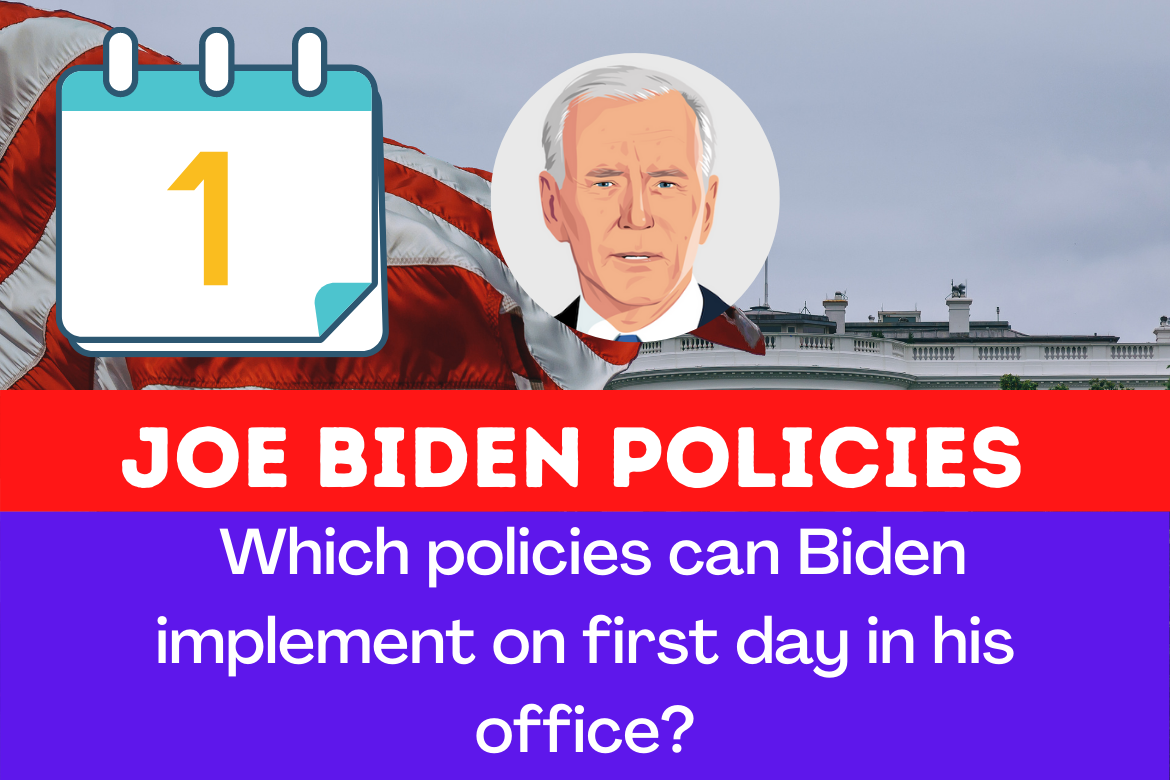 Joe Biden has reached the White House now; the transition plan will start soon enough, as there is not much that President Donald Trump could do about that. President-elect Joe Biden policies that he promised to implement in the USA while campaigning can be announced by the president-elect as soon as he gets into the White House.

The president-elect plans to use executive orders to take back several policies implemented by the Trump administration ranging from immigration and healthcare to education and the economy.

The Democratic Party will have to take back two Senate seats from the Georgia runoff elections to easily control the Senate and implement Joe Biden policies.

However, as the previous record shows, the president holds executive authority that empowers him to implement policies in several sectors without any help from the Senate or the House of Representatives.

There are 277 policies that Joe Biden can enact on day one without getting any help from Congress. In this article, we will be discussing these policies, providing our readers with the idea of what to expect in the first few days of the Biden administration. What are these Joe Biden policies that can be implemented immediately?

During the Democrat primary, the Biden campaign team published a 111-page document that contained the findings of the unity taskforces. This document contains 277 Joe Biden policies, as the president, could implement on the first day of his presidency by using an executive order so ost of the Joe Biden policies will be revolved around them.

Both progressive and moderate leaders of the Democratic Party agree on these policies, so there is no likely interruption from their side. Six taskforces recommended policy change in six major fields.

Although these Joe Biden policies may not help the United States to tackle some of the major issues being faced by the country, they will prove to be helpful in longer-term strategies. The areas where these policies could be implemented, along with the number of policies, are as follow:

Not all of these policies will be new, as most of them will be to reject the actions taken by the Trump Administration and reinstate some from the Obama rule. The Joe Biden policies implementation in immigration demand a Democratic majority in the Senate; however, there are some areas where the president-elect could make changes using an executive order. These include:

The Trump administration placed several restrictions that slowed down the process; lifting those restrictions will be very helpful in getting the work done as soon as possible.

These are a few of the main Joe Biden policies that he could implement using the power vested in the president.

During his campaign, the president-elect has proposed some of the most ambitious plans on climate change than any previous United States presidents. Joe Biden can use the executive order to help America fight with the emerging threat of climate change.

Above are a few of the potential Joe Biden policies that the president-elect can implement regarding climate change. During the rule of Donald Trump, America suffered a lot of damage concerning climate change. Biden will have to start from where he left as the vice president, and take immediate actions to address the issues. On Inauguration Day, January 20, 2021, Joe Biden will be sworn in as the president of a country that is suffering from a pandemic and is falling economically with each passing day. Therefore, he will have to use executive measures to take immediate steps to counter the rising threat to the economy. There are roughly 55 policies that the president-elect can implement using his executive order.

There is not much that Joe Biden will be able to achieve regarding the economy using executive authority, as most executive orders will be slow-moving regulatory steps.

The Democratic Party will have to reach an agreement with the Republicans to get a common ground so that the promises made during the presidential campaign can be implemented. Several areas need Congress to be implemented, as the president does not hold the executive authority over them. Education is one of those sectors that suffered most under the Donald Trump rule. President-elect Joe Biden policies promised reforms in this sector, and now, when he becomes the president on Inauguration Day, educators and students from all over the country look forward to his executive orders to deliver the promised reforms.

The president can implement 39 policies in the education sectors with the help of executive authority vested in him being the president. Some of those are as follows:

Education is one of those fields that will require the urgent and utmost attention of the president-elect. Along with pandemic and economy, the president will have to start working on an education package as soon as he can. The presidential campaign of Joe Biden stressed three words,  equality, equity, and justice. Donald Trump made many mistakes but, in the end, lost the presidency because of systematic discrimination that was encouraged under his rule.

Joe Biden has won the presidency, but the country is divided, and he would have to take severe action to unite the country as this is what he stood for. Concerning criminal justice, the United States under Trump has been one of the worst countries in the world. Following are some of the measures that Joe Biden could take to address the issues in criminal justice.

Criminal justice demands some immediate actions from the president-elect, as these are the things that Americans supported him for and stood behind him. Healthcare has been undoubtedly the most discussed topic during the presidential elections. The importance of this field increased following the identification of flaws due to the COVID-19 situation. The following are some of the measures that are expected to be taken by President-elect Joe Biden immediately after Inauguration Day in January.

The COVID-19 pandemic has identified several loopholes in the healthcare system. The president-elect will have the responsibility to fill these holes while helping the country to get out of the worst crisis of its history.

The United States is currently going through the worst phase of its history. The challenges being faced by the country demand immediate actions from the president, without waiting for Congress to allow these actions.

The president holds executive power that allows him to take certain actions solely on his own, without having any kind of help or intervention from Congress.

Read more about Democrats Policies: What is the Vice President-elect Kamala Harris Policies?