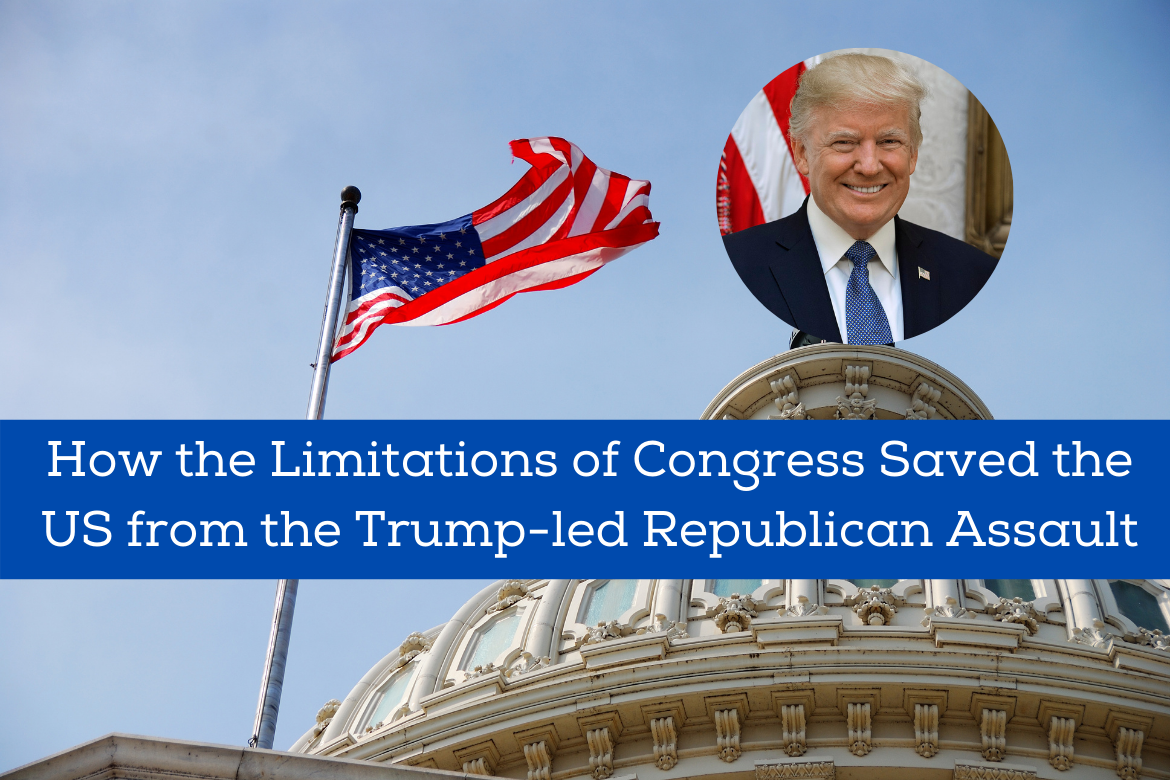 Therefore, there are certain limitations of Congress under the Constitution of the United States. These limitations of Congress helped the United States in the last four years, as the Republican-led Congress, dictated by the former President Donald Trump, could have been dangerous not only to  US unity but also for the law and order of the country.

How did these limitations of Congress save the US in the last four years? Section 9 Article 1 of the Constitution gives an array of things that Congress cannot exercise, and that is discussed below.

The process of legislation binds Congress to act within the constitutional boundaries. If Congress makes any law counter to the Constitution, it will be abrogated by the judiciary.

This restriction stopped the Republican-led Congress from making any such laws in the first two years when Republicans controlled both the House and the Senate. Had Congress made any such law, it would have been declared null and void by the US Supreme Court.

However, the Constitution of the United States saved the rights of these suppressed groups. Otherwise, the passing of racial laws was on the cards by the Republican-led legislature, considering the rhetoric of white supremacy by former President Donald Trump.

This was also the reason why the Trump-led legislature could not overturn the laws related to DACA and Dreamers.

Article 1 of the Constitution allows freedom of expression and religion to all the people living in the US. Hence, no law can be made that negates this right to a group of people. However, by doing a Constitutional amendment, Congress can make these types of laws.

The Constitution says, “The privilege of the Writ of Habeas Corpus shall not be suspended, unless when in Cases of Rebellion or Invasion the public Safety may require it.”

It means that Congress cannot enact any law that denies the rights of criminals by any means. All criminals, as a matter of fact, are given the right to a fair trial. However, this right can be denied in extreme cases, including high crimes, such as treason.

Extending this provision to the second impeachment of Donald Trump will make it even more relevant. By inciting a mob to attack the United States Congress, Trump was involved in a high treason crime and a rebellion against the country.

Had Congress explored, it could have even barred Donald Trump from a trial. Despite this, he is being given the right to a trial, as the Senate trial awaits him despite Republicans’ efforts to evade him from it.

This limitation of Congress gives him a chance to prove his innocence; otherwise, it would have given Trump a chance to mislead people that he is not being given a right to defend himself in front of the Senate.

He could have further won the people’s empathy this way by claiming that he was not guilty, and Congress did not give him an option to prove his innocence. Congress’ Incapacity to Give Titles of Nobility to People:

Under the law, Congress cannot give “titles of nobility” to any person. This is also one of the significant limitations of Congress, as titles of nobility are the traditional way to transfer heredity from one generation to another and is a common practice in many monarchies.

These titles of nobilities may include the title of “His Highness,” “Sir,” “Archduke,” “Grand Duke,” etc. The beneficiary enjoys special status with these titles, even after leaving the office, and is remembered due to the title conferred to him.

This specific provision prohibited Congress from giving any title to Donald Trump in the last four years, as he was perceived as God among the Republican circles.

Had it not been about this law, he might have given a title of nobility by the Congress during the first two years of the Republican-led Congress on his tenure.

Trump could have even used these titles of nobility after leaving the office to influence the minds of the masses, as many Republican voters stuck to the party just because of him, and he has a significant influence over the Republican party base. This was also a concern considering how Republicans followed him blindly, adhering to his claims of the fraudulent elections.

Trump could have even requested Congress to get such a title considering the narcissistic attitude that he exhibited during his presidency. Not only this, Trump was often seen bragging about his achievements in front of the media, and the demand for this type of title was on the cards in the absence of these types of laws.

Absolute powers, in certain hands, are always dangerous for democracy. Therefore, mentioning specific provisions explicitly in the Constitution to curtail Congressional authority of certain matters was one of the most effective decisions of the framers of the Constitution.

Due to these limitations of Congress, the integrity of other branches of the US government, specifically the judiciary, is enhanced, which plays a vital role in maintaining democratic practices in the country.