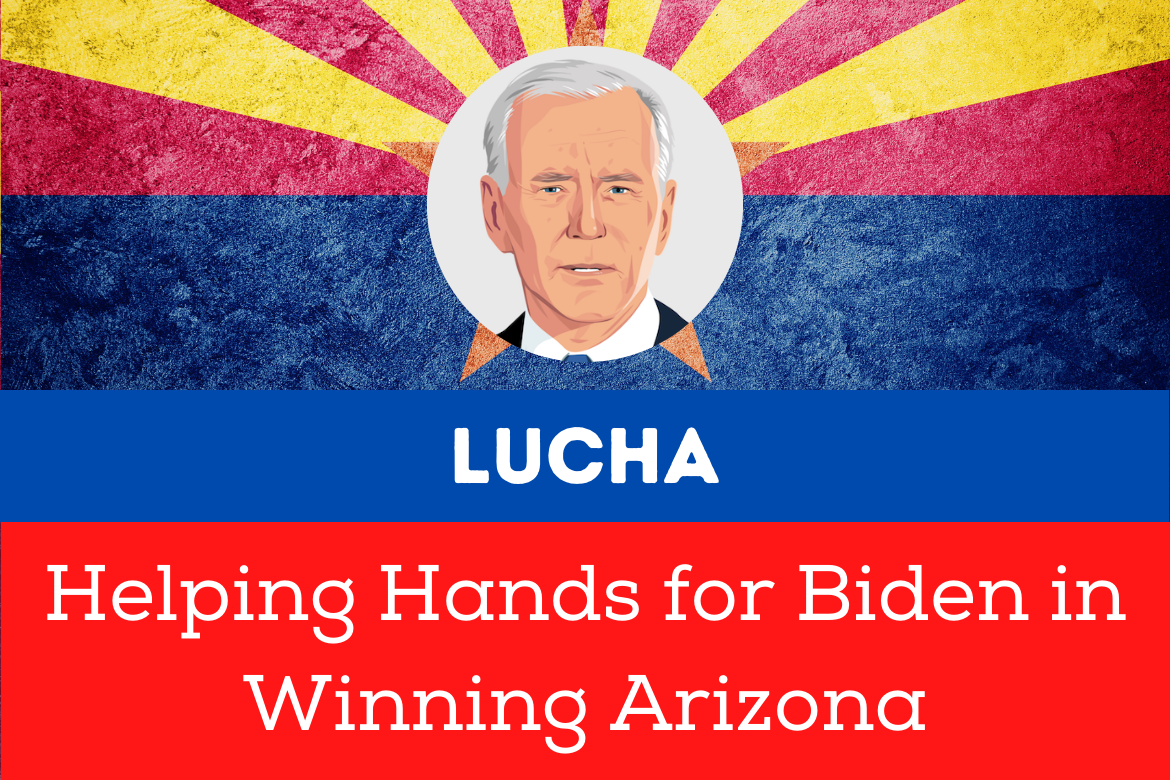 Nobody could have imagined that Arizona could vote for a Democrat eleven years ago when SB 1070 was signed. It was one of the most extreme anti-immigrant laws in the country. According to this law, police officers had the authority to ask about the citizenship of anyone they stopped or suspected of illegally residing in the country.

President-elect Joe Biden’s victory in the 2020 presidential election was historic in many ways. He not only attained a historic lead in the Electoral College votes but also flipped several red states to blue.

The victories of Joe Biden and Senator Mark Kelly became possible because of the years of hard work by activists and groups who spent their time creating awareness among voters and urging them to vote for the Democratic Party.

Arizona was considered a red state with a strong Republican hold, but Joe Biden attained a shocking victory in this state. The real credit goes to those activists who have been working for this cause. There was a combination of disparate factors that created a perfect environment for Joe Biden to win this state.

Democrats benefited from the changing demography of the state of Arizona, with Latino voters growing in numbers and activists helping to register these voters.

Most importantly, these activist groups, Living United for Change in America (LUCHA), played a chief role in the Arizona battle and achieved unbelievable results.

How did LUCHA help the Democrats to flip Arizona? Let’s have a look. Not a day or years: A decades of struggle for LUCHA:

Latino voters have always been a center of American politics, being a major minority group, but governments have always undermined them.

A lack of political awareness among these voters is one of the chief reasons governments take severe actions against them without fear of any resilience and consequences.

To fight against these odds, the younger generation took the responsibility of leading the community in the political arena of the country.

These young organizers distributed pamphlets, organized events, and held public discussions on political matters to educate the population about their rights and responsibilities. The movement took a sharp turn in April 2010, when the Republican governor of Arizona signed SB 1070.

Under this law, the Latino community faced severe implications, especially in Maricopa County, where Sheriff Joe Arpaio used it to harass residents.

Thousands of people protested against this brutality and started the struggle to eventually end the Republican rule in the Grand Canyon State.

One of the participants, Abril Gallardo, believed that this was a struggle to survive in the Latino community in Arizona. Gallardo is now known as Mother Lucha for founding the grassroots organization LUCHA.

The organization gathered support from not just the young and the adults but also the school-going children who witnessed their parents living in fear of their existence.

Most of these children are now eligible voters. Those who are not are still taking part in the activism to spread awareness and urge their family members to vote against Republicans. According to NBC News, every 1 of 5 voters in Arizona is a Latino. As a matter of fact, President-elect Joe Biden won 63 percent of the votes from Latino communities.

Now, four years later, Joe Biden won by 10,000 votes, a slight margin, but still enough to win him the state, considering that no Democrat has been able to win it in two decades. For many, this was just an election, but for others, it was a long war.

Lucia Salinas, a Mexican immigrant who lost her job during the pandemic, has been knocking on doors in the blazing heat to urge people to vote for Joe Biden.

During the summers, Salinas knocked on ninety0 doors each day. During the final stretch of the presidential election, she came down to forty.

There were days when Salinas and her mother had to scrounge around for metal to exchange it for cash. Salinas is one of the hundred union members working alongside the coalition of Latino groups to throw out the Republican rule in the state and the country.

These groups knocked at more than 800,000 doors with the same aim that Salinas had.

Their main target was either the Latino voters or the undecided voters. Most of them backed Bernie Sanders in the primary, but he lost, and they had no other choice than to stick with Joe Biden.

Many activists who struggled for Joe Biden this year once used to be Republican. Kristin Urquiza became famous after sharing her story at the Democratic National Convention about how her father died of COVID-19 due to Donald Trump’s mismanagement. Her mother voted for Trump in 2016, but now they both voted for Biden.

Polling from American Election Eve and Mi Familia Vota, another activist group like LUCHA, suggested that the ongoing pandemic was the most important issue for the Latino community. Mi Familia Vota is a national civic engagement group that promotes social and economic justice.

Alejandro Arevalo also considered the pandemic to be the most severe issue after his brother contracted it. Arevalo is among those Latino immigrants who voted for the first time.

He told LUCHA activist Alejandra Gomez that this was his citizenship card, referring to the ballot in his hand. Gomez was one of those volunteers who were helping the first-time voters with the registration and voting process.

Gomez, the co-director of LUCHA, and her friends canvassed more than 500,000 doors in the last week of the 2020 presidential election.

It is seen that most people who voted for Biden actually voted against Trump and not in favor of Biden.

Liliana Trejo-Vanegas works as a freelance photographer and is among those people who voted for Donald Trump in 2016 but changed their decision in 2020.

During her interview with NBC News, Trejo said that her vote was more an anti-Trump than a pro-Biden one. She wanted to vote for someone who would help her family members and community, and Trump was in no way that person. The most important job done by LUCHA was to educate the voters and help them with the voting process. Biden’s campaign focused especially on the Latino community because they knew that they could give them a lead.

In Georgia, Democrats had the majority from Black Americans. Similarly, in Arizona, they were more popular among Latino Americans compared to Native Americans. This Latino population had to be educated about their issues and their solution; this work was done by LUCHA.

There are many similarities between Georgia and Arizona, and one of these is voter suppression. It is interesting to note that voter suppression is a big issue in all Republican states because they keep them red. Most of the Latino voters are curbed from their right by this tactic of voter suppression.

LUCHA co-director Gomez believed that one of the main reasons Latino communities faced harsh situations was the lack of unity and awareness among the Latino voters.

She recognized the problem, and the group worked to eliminate Trump. They went out knocking on doors and organizing community events that proved to be very helpful in the end.

The job was a massive one, so they joined hands with others to lead almost one million people of color and immigrants to the ballot boxes. Voter turnout was the biggest challenge in the Biden campaign in Arizona.

According to Janet Murguia, the president of national Latino civil rights group UnidosUS, more than 15 million Latinos voted in the 2020 presidential election all over the US. A fair portion of these voters was in Arizona. This could never have been possible without the work done by LUCHA and other groups.

LUCHA is an organization that has been working to organize Arizona’s low and moderate-income and minority families to take action against the injustice they face.

The organization provides empowerment services, leadership development, and civic engagement. The organization played a key role in flipping the state of Arizona towards Biden. Amid all of the Republican practices of voter suppression, Biden’s victory w0uld have never been possible in Arizona without the efforts of LUCHA activists.