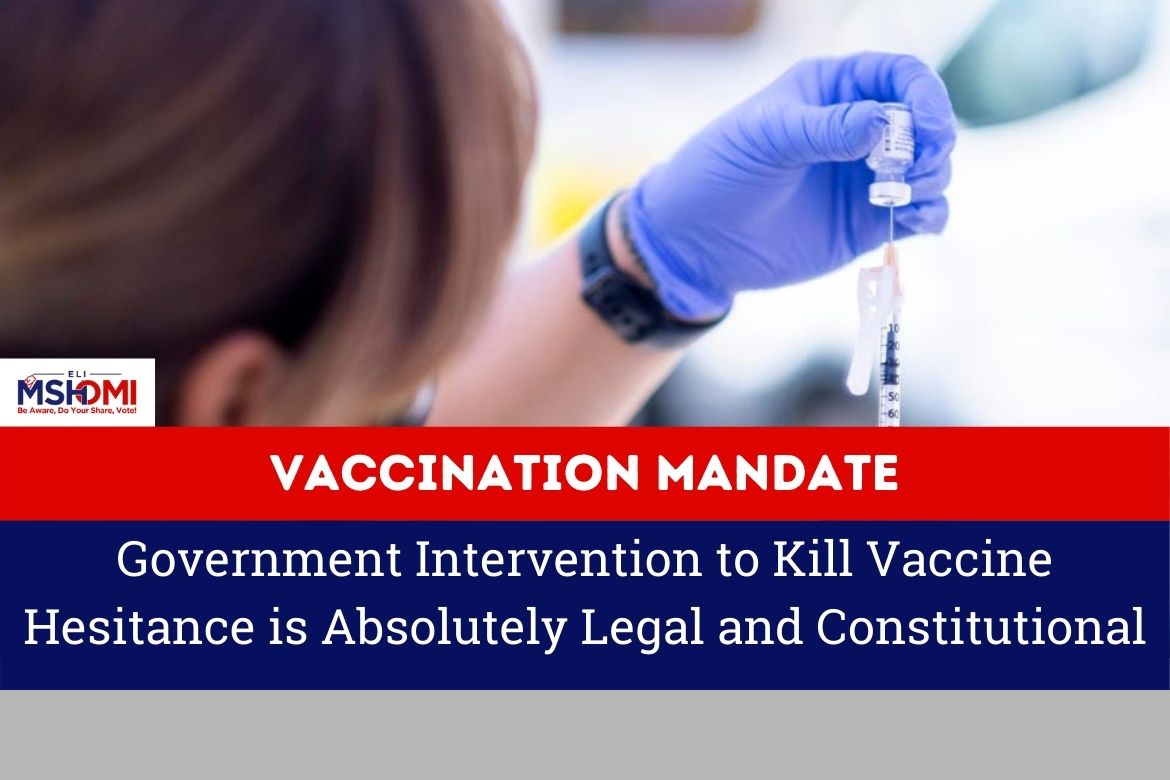 Just when businesses across the United States have started enforcing mandatory vaccination, the debate about the vaccine mandate has kicked off, as people started questioning the legality of this mandate.

There has been a worrying plateau in the coverage of COVID-19 in the U.S. In addition to risk mitigation techniques such as masking and distancing, the deadly pandemic is also associated with the highly infectious Delta variation.

The spread of the Delta version and people’s hesitation to be vaccinated has compelled many public and private entities to mandate vaccinations.

Mandatory vaccination by employers, state, and federal governments has been the subject of fierce discussion in the United States.

To prevent outbreaks of disease in the workplace and encourage more people to get vaccinated, New York City and several states require that unvaccinated public workers get tested every week.

With mandatory vaccination, the situation is becoming tricky, as many people want to preserve their jobs yet are hesitant to get vaccinated.

Unions are opposing this approach, arguing that employers should not make a unilateral choice to require mandatory vaccination for their employees. By law, implementing these mandates has many legalities. Any employer has an obligation to protect their employee, customers, and suppliers.

The mandatory vaccination requirements go back to the start of the last century, as it is a matter of health care and safety.

The legality of a vaccine requirement will be determined by who is imposing it and how they have constructed it. These considerations appear to have been carefully incorporated into mandates that were previously enacted.

However, there are still some doubts about how courts will respond to more aggressive government tactics of intervening in public life.

Nevertheless, in light of the Delta variant and low vaccination rates, policymakers are well within their rights for requiring the Coronavirus vaccine. Vaccination Mandate Under the Nose of the Court

A previous Supreme Court decision regarding the government’s power to quarantine and require vaccinations for public health emergencies like the coronavirus may resurface in the face of the government’s right to protect civilians.

The federal government’s ability to make vaccines mandatory has yet to be determined. However, a 1905 decision by the Supreme Court provided state governments with authority to issue such statements.

In February 1905, the Supreme Court of the United States permitted the city of Cambridge, Massachusetts, to impose a fine on its residents for refusing to get smallpox shots.

Cambridge and the northeast were swept by an epidemic of smallpox in 1901. In response, Massachusetts mandated that all individuals undergo smallpox vaccinations or face a $5 fine.

A petition was filed in Court by Pastor Henning Jacobson, arguing that vaccine law is unconstitutional, and he refused to get vaccinated and pay the fine.

Following rejections from state courts and the Massachusetts Supreme Judicial Court, in Jacobson v. Massachusetts, the United States Supreme Court upheld the decision by a 7-2 majority.

Justice John Marshall wrote in the decision that states had police power for the preservation of public health.

Also, he explained, every individual within the scope of the United States Constitution has the right to liberty, but that does not imply that this right is absolute with no exceptions.

Vaccine mandates will almost certainly be challenged in court, as this is a matter of freedom of choice. But, so far, judges have been reluctant to interfere with blocking vaccine requirements as long as they are written with sufficient religious and medical exemptions.

The way COVID-19 has been politicized is unmatched by any other virus. State public health authorities have acted in the past on issues ranging from tuberculosis to Zika to Ebola to influenza.

Governments are doing the exact opposite during this outbreak, preventing health professionals from acting quickly and forcefully. Therefore, COVID-19, as well as the next health crisis, will be harder to fight.

When it comes to local government offices, the laws for vaccine mandates vary, and mandates for the COVID-19 vaccines have been outright barred in a few states pending full approval.

So far, six states have passed laws in the recent year prohibiting state and local governments from requiring employees to receive the COVID-19 vaccine, and twelve states have outlawed mandates in schools.

In a recent press conference, President Biden urged governors to remove restrictions on businesses and schools to increase vaccination rates.

Vaccines for diseases including measles, rubella, and polio are required for school-aged children in all 50 states and the District of Columbia, while the criteria vary by state. There are a few exceptions, namely medical and religious.

The National Conference of State Legislatures reports that 44 states and Washington D.C allow exemptions for those who have religious objections to immunization, and fifteen states allow moral or personal belief exemptions for children.

Opponents of vaccine mandates argue that governments and businesses cannot impose mandates until the current batch of coronavirus vaccines is fully approved. Vaccines are currently based on legal ambiguities and FDA authorizations that only cover emergency use.

However, a legal opinion from the Department of Justice does not preclude a private company from requiring immunizations. This decision grants private and public businesses the legal authority to order their own mandate.

Dr. Anthony Fauci said, once the vaccines are approved, all sectors will push harder to mandate their use.