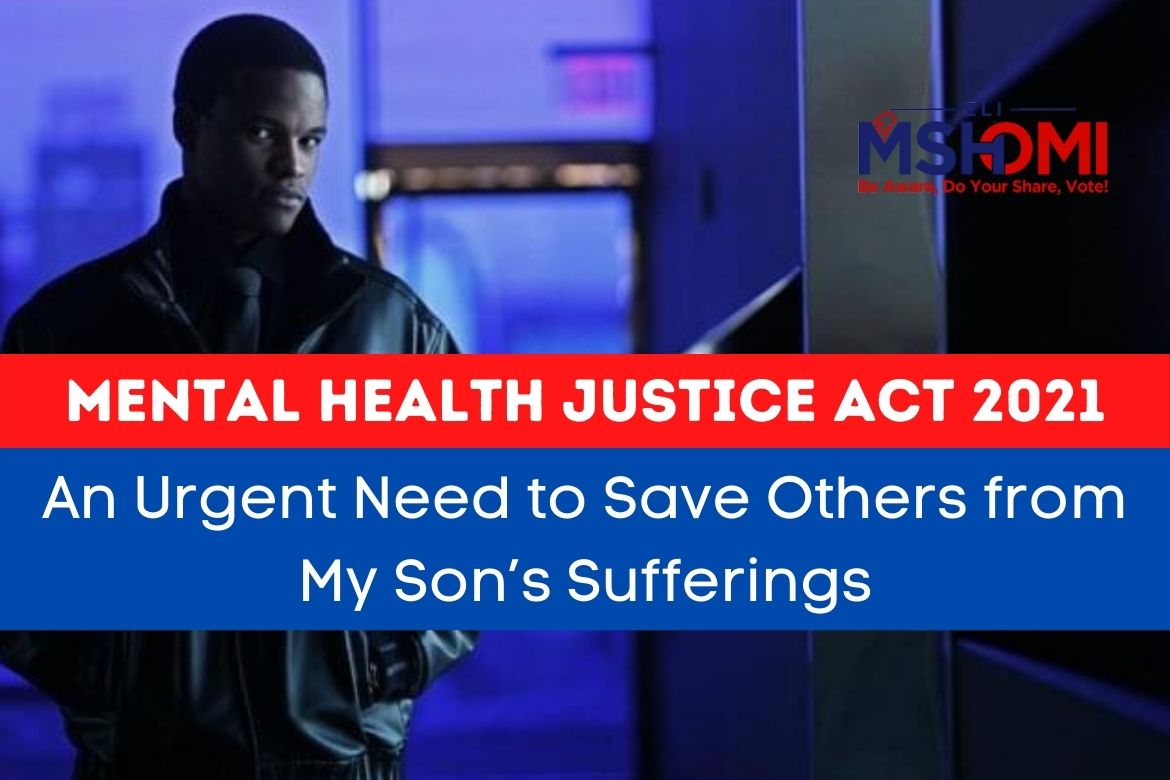 Professionals have long discussed the importance of mental health, as it is the most ignored entity of modern times.

The latest bill introduced in Congress in February 2021 is the legislation that we need. The legislation, named “Mental Health Justice Act of 2021,” would allow the states and local governments to train and dispatch mental health professionals to respond, instead of law enforcement officers, to emergencies that involve people with behavioral health needs.

This was the need of my son as well. He needed health professionals instead of police officers to get rid of his suffering.

My son was the most loving, caring person to whom his friends and family could attest. He killed himself on 10 October 2013 due to mental illness, which had been diagnosed five years before the fateful event.

It’s a touchy subject to me. I wrestled with the idea of writing about it for a long time due to the stigma around the issue, but the bill “Mental Health Justice Act of 2021,” which was introduced in Congress in February, forced me to discuss this subject.

I finally decided to put “my two cents worth” to the issue, as no one can understand the consequences of neglecting this bill, and Congressional action is urgently needed to save more lives in the future.

Firstly, the severity of the matter demands that we throw this stigma attached to it away. Mental health denials decry that:

“your brain is just another organ in your head, just like the rest of the organs. If you have liver, heart, or other problems, you get help and probably medication.”

Four primary chemicals in your brain primarily dictate how you feel, namely, dopamine, oxytocin, serotonin, and endorphins. If any of the chemicals are imbalanced or lacking, you get anxiety, depression, bipolar disorder, and other mental diseases.

The passing of this bill would be the most significant achievement of Congress in decades because mental health is the thing with which many people die a silent death.

The bill signifies the need for the involvement of mental health professionals instead of law enforcement agencies to respond to mental queries.

Mental Health Issue and Suicide: The Story of My Son’s Suffering

Two weeks before the dreadful day, my son texted his friend to ask him where he could buy a gun. Before that, he asked the same friend whether or not killing oneself is a sin or not. His friend was concerned, so he reported it to the police station.

Police rushed to my house and searched it for guns because they knew his history, but they found no gun.

Several times, they had been in the house, responding to my calls when my son needed medical help for his mental health issues.

Usually, they issue a 72-hours police hold and call an ambulance for my son to be taken to the hospital. They do it when they see that the person in the discussion could be a threat to himself or others.

Since he was home alone, they called me, waited to leave until I was back, and didn’t issue a 72-hours hold because police didn’t find him aggressive.

The point of concern for me and all those who see others suffer from mental and emotional pain is that police are not mental health professionals.

They are not supposed to diagnose a mental health patient but to assess any potential aggression and harm to see if the person in the discussion could threaten himself or others.

But my son was not aggressive. As a vibrant young man, he asked if it was against the law to ask where to buy a gun, so the police couldn’t put the 72-hours hold on as usual.

During the same time, he went to his college and kept on asking other students in the library where he could buy a gun. The students reported it to the management, which called and interviewed him.

The administration determined he had mental health issues, so they suspended him until he could get help, adding more misery to this life. The management called me and informed me about the decision.

If all of this was not enough, he went to church to ask the pastor that if someone kills himself, would it be a sin or not.

He asked him whether it is written in the Bible and was told that there is no such verse explicitly saying suicide is a sin in the Bible.

So here comes a question most people asked me; why didn’t you take him to the hospital?

The answer is that he was above 18 at that time and considered an adult. He had to voluntarily go to the hospital or be taken by police with a 72-hours police hold. But he wasn’t aggressive at all, so the police could not get involved.

So, for two weeks, I knew my son wanted to kill himself and, probably, me too. But I could not do anything at that time. That was the time I felt most helpless in my entire life.

I watched my son pulling away from me with every passing day, but the lack of mental health regulations tied my hands to do anything for my son.

As those painful days went by, I got the idea of calling a suicide hotline and asking for advice. After hearing my story, they said they would help by bringing mental health professionals to assess whether my son was as suicidal as I claimed.

I went to the police, who by now already knew the condition of my son.

I told them about the mental health professionals who were coming to assess my son. The police agreed that if they determined he is suicidal, they would issue a 72-hours hold and take him to the hospital since they would have documents from the professionals.

The mental health professionals came to assess him, and we went up to knock on his door, but no response came from his side.

We decided to call the police, thinking that he was ignoring our knocks because of his condition.

The police came to the scene, made a forced entry into the room, and we all saw a dreadful scene. He shot himself that night.

Mental Health Justice Act 2021: It Could Have Saved My Son’s Life:

Now I see the role of the mental health legislation in all this process. Had the lawmakers back then realized the importance of the matter and passed some bill regarding that, my son could have been saved.

Had the mental health assistance been involved in the beginning, my son could have been saved.

Were there no stigma around the discussion of mental illness, my son could have been living now.

As this issue is a countrywide matter and not a new one, the legislation along somewhat the same lines is present in Florida.

The act, namely the Florida Mental Health Act of 1971, or as it is popularly known as “The Baker Act,” allows the involuntary detention of the people who are suspected to be suffering from mental illness.

This way, they cannot harm themselves or others in this period. This act is a classic way to deter mental health issues, considering that they can be detained involuntarily for 72 hours, which helps them in their rehabilitation.

So, even the presence of the same bill at the federal level would have been beneficial for my son in saving his life.

Today it pains me a lot that the police and I saw all of this coming, and we were unable to do anything just because there was no regulation at all.

Our hands were tied badly due to this stigmatic attitude of society and the negligence of the lawmakers towards the severity of the issue.

This would be one of the best police reforms in recent times. It would not only involve the sending of mental health professionals instead of police officers but would lessen the burden on the cops, and also provide an opportunity for mental health patients to have better treatment.

Police officers do not know the psychology of the person they are dealing with, but mental health professionals do know these things.

In most environments, police officers treat everyone equally without seeing the preexisting underlying mental conditions.

So, instead of doing good at the end of the day, they end up increasing the suffering of the mental health patient, which forces the patient to take severe steps.

As I am the eyewitness of my son’s scenario, I know that even a bit of mental assistance could have put him in the rehabilitation period.

The negligence towards mental health is also represented by the fact that most insurance coverages do not pay for mental health assessment or treatment.

This denial to entertain mental health issues is becoming a national narrative that is costing people their peace and savings.

I understand the need for this legislation more than anyone, as I am a firsthand victim of these improper regimes of mental issues.

This should not be considered an effort to defund the police, as it would just politicize the matter, forcing Republicans to use their power of the filibuster.

Instead, this needs to be seen from a completely different perspective of helping those in need.

President Biden needs to understand the urgency of the matter to push the congressional Democrats to act.

Only then, more mental health patients can be saved from facing misery.