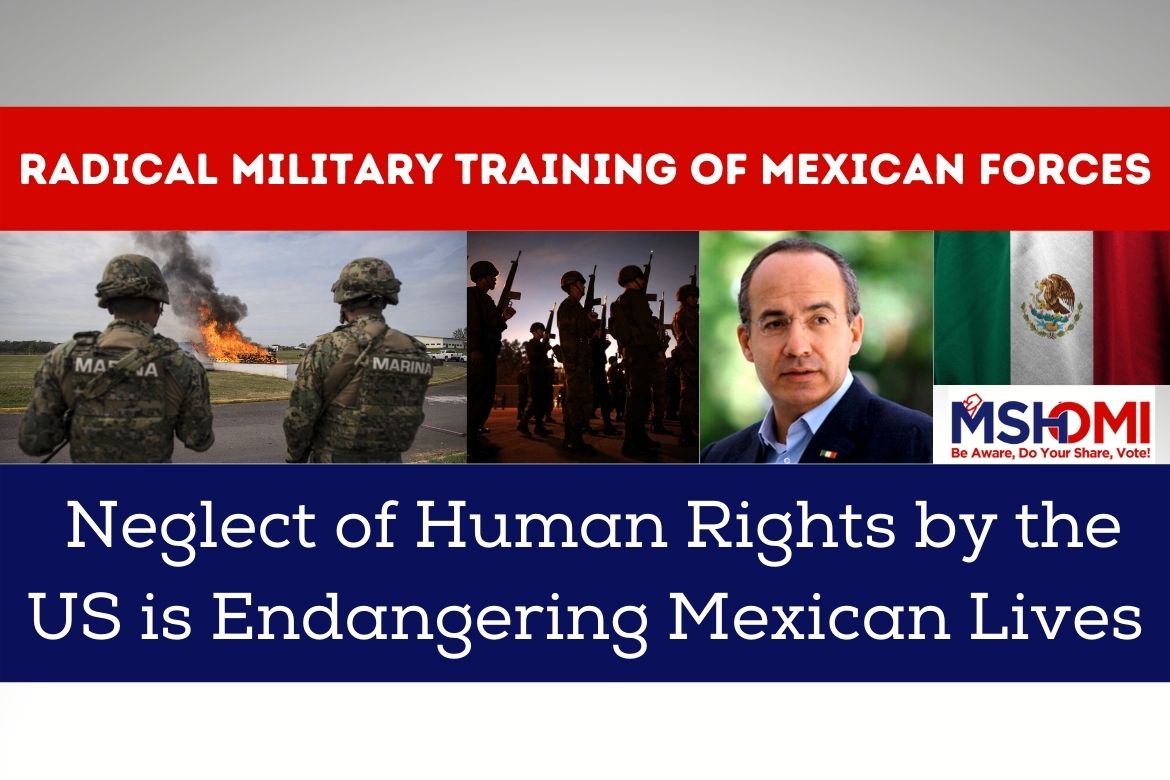 The US rhetoric of championing human rights overseas is not hidden anymore. But in actuality, the practical actions are once again decrying a miserable story of hypocrisy, this time in Mexico.

The latest reports suggest that the Mexican military marines involved in disappearing people were trained by the US.

This has raised concerns of many stakeholders about the credibility of the US claims, which believe that the US mantra of concern for human rights is just a fancy and popular approach of eye-washing liberals, mostly for elections purposes. Killing Human Rights in the Name of War Against Drugs: A US-Mexico Story

The reports suggest that the group was involved in perpetuating violence against families living nearby the Texas-Mexico border on the Mexican side.

These abductions reached 47 in 2018, of which 17 bodies were recovered, showing signs of physical torture. Shockingly, the group was trained by the US.

The marine force is the most trustworthy partner of the US in tackling the drug cartels on the Mexican side of the border; hence it receives extensive military and tactical training from the US.

Interestingly, the US support of the group has consistently increased over the last decade, despite continuous condemnations of international human rights watchdogs about the deteriorating human rights violations by the group.

Mexico’s war against drugs has seen more than 300,000 people lose their lives since 2006 when former President Felipe Calderon initiated an offensive against drug cartels.

The problem with these wars is that they can be led by weak intelligence, which is the primary reason for violence. Just like the Chinese model, where they claim that Uighur Muslims are inspired by extremist ideology, they put them in concentration camps, with no concern that they may incarcerate normal citizens in the process.

The same is the case in the US military operations against the ISIS-K in Afghanistan, where a drone strike ended up killing civilians instead of insurgents, an attack that sparked a much-needed debate about the efficacy of drone attacks.

Thus in Mexico, while the US may train the military for fighting against drug cartels, weak intelligence will only lead to the mass murder of innocent people by those trained militias.

The US-Mexico agreement of the Merida Initiative came into the limelight recently when the talks to replace it surfaced amid the rising border tensions.

In Mexico’s war against drug cartels, almost 100,000 individuals have also been disappeared apart from those who were killed.

Intelligence, and not Military Offensive is the Solution, to Counter Drug Cartels

The solution lies in focusing on intelligence instead of relying on hard power. Every cent invested in expanding the military must be followed by a dollar in strengthening intelligence to counter drug cartels effectively.

Although some measures have been taken in this regard, most security forces find military offensives more feasible options compared to launching investigations.

For instance, in 2011, the US and Mexico agreed to strengthen the rule of law and enhance criminal prosecution in their bid to shift Mexico’s militarized war against drug cartels.

Undoubtedly, Mexico is considered a home to drug cartels in Northern America, and the problem needs to be addressed peacefully.

The perpetuation of violence is what drug cartels need, and any military offense would go in their favor, which will amplify their narrative.

The data shows that a significant chunk of Merida spending did trickle down to civil society, but the present trends depict that the US military has failed to provide human rights instruction to the groups that are being trained.

The need for the hour is to inculcate human rights training programs to anyone getting military training. This will make people aware of fundamental human rights, of which the right to live tops the list.

Just like the debate of police training, where police are expected to behave wisely in their encounters against unarmed civilians, military training should also inculcate these regimes.

The US-trained armies already hold a bleak record of undermining human rights in Africa, where they launched coups during training.

Thus, the US strategy toward Mexico should be driven by human rights so that no innocents fall victim to the so-called war against drugs.