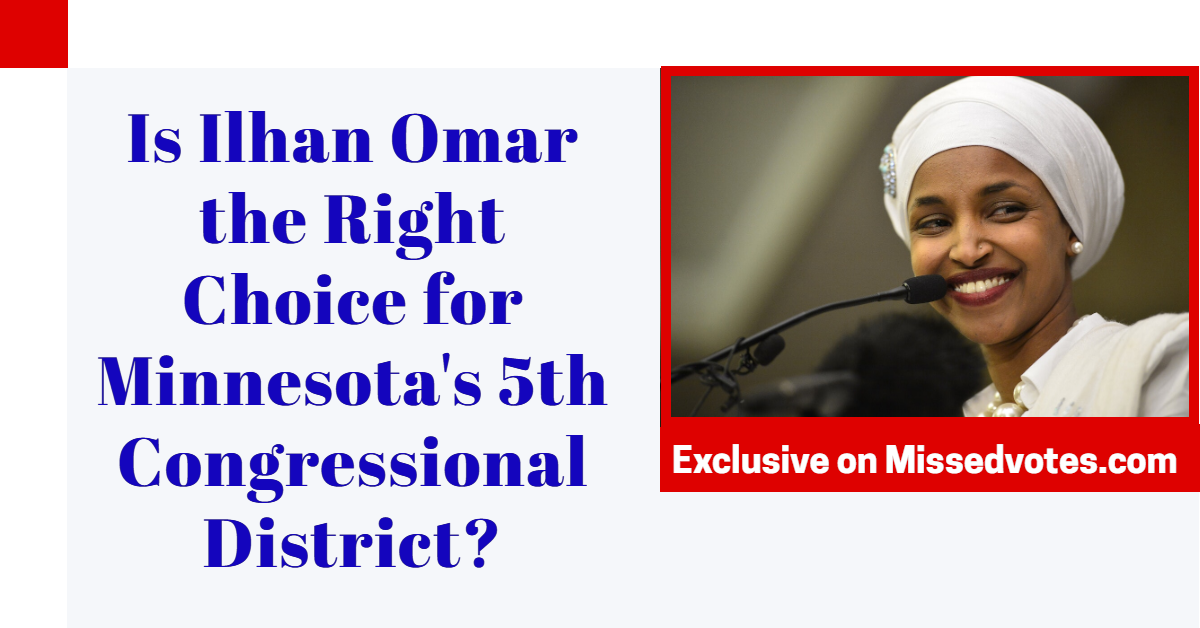 Ilhan Abdullahi Omar is the first woman who has worn the hijab on the US House floor. She is the first Muslim woman, along with Rashida Talib, and is also the first Somali-American legislator of the country. She is also a member of the House Foreign Affairs Committee.

Omar was elected in 2016 in her home state to the House of Representatives. Being a woman was only one of her primary challenges; she also had the cultural barrier of being Muslim.

Is she the right choice for Minnesota 5th Congressional District?

At the age of only fourteen, Ilhan Omar fell in love with politics when she was her grandfather’s interpreter at a local political meeting in Minneapolis. She was inspired by Representative Shirley Chisholm, the first African-American woman member of Congress.

People have witnessed her solid personality and extraordinary activities in the community. She established her image as a strict woman for the well-being of the community and is kind-hearted when it comes to helping people.

One of the most positive sides of her is that she stands strong against all the contradictions in society, and takes real steps to do good for the people of her community, state, as well as country.

Though the voting activities on the August 11 primary election are going to be affected by COVID-19, Ilhan Omar is confident of winning for the second time.

Because of the impact of the recent pandemic, Minnesota Secretary of State Steve Simon is working to waive the state’s absentee voting witness requirement for the August 11 primary election.

But his challenge against the rule was not successful in having an effect on voting. So early voting for the primary is going to start.

No matter what happens, and how her competitors spread misinformation against her, Ilhan Omar is living in the hearts of the people of Minnesota.

The people of the fifth district always have faith in Ilhan’s ability to represent them. She actually deserves people’s love, for she has always fought for a better life for all Americans.

She hopes that America can be a better place for humans of every race and color.

Ilhan Omar has underpinned the protest for George Floyd, who was an unarmed black man who died under police custody. She is a respected member of an unofficial group named “The Squad.”

The members form a united front in order to push for progressive transformation, like Medicare For All and the Green New Deal. Other members of the group include Rashida Tlaib, Alexandria Ocasio Cortez, and Ayanna Pressley.

Minnesota congresswoman Ilhan Omar is also probably gaining more popularity because of some activities by Antone Melton Meaux as her challenger.

Many opined that Antone Melton Meaux designed his election campaign to open the door of dividing the Jewish community. Rep Ilhan Omar is confident of the power of people rather than the power of money acquired by Ilhan Omar challenger 2020.

Rep. Ilhan Omar is the youngest of seven siblings, born on October 4, 1982, in Mogadishu, the capital of Somalia.  Her father, Nur Omar Mohamed, was an ethnic Somali and a teacher-trainer by profession.

Her father and grandfather raised her as she lost her mother at the age of two. Her grandfather, along with some of her aunts and uncles, served as educators and civil servants.

Her early life probably explains why she wakes up every single day working towards liberty, justice, and the pursuit of happiness.

She came to America in search of justice, as she was raised in an environment full of injustice. She, along with her family, fled Somalia during the civil war.

Only eight years old, Omar then stayed in a Kenyan refugee camp for four years without hopes and dreams. Life was full of uncertainty, everything including even a bucket of fresh water or a meal or shelter to sleep in was unpredictable.

However, finally, the family managed to move to the US in 1995. Life was not yet easier then. Soon, she realized that she was not one of the favored ones due to her color, style of dress, appearance, and such. She was bullied a lot in her middle school.

Through all these ups and downs, she became a naturalized citizen with African birth at the age of seventeen.

She started her political career managing town council campaigns and worked as a senior policy advisor for Minnesota politicians. She won the election to the state legislature in 2016, unseating a 44-year-old incumbent in the process.

Omar’s grandfather is no longer living. She said that she thinks about him a lot. He introduced her to politics. He would be proud to see how far she has come.

With a heavy heart, we learned that on June 15, 2020, she lost her father as well due to COVID-19. This is a loss for her, which no one else can understand. We still feel tremendous sadness for her. May his soul rest in peace!

How is Minnesota’s 5th Congressional District Election going to be the most expensive in the state this year?

Minnesota’s Fifth Congressional District seems likely to be the most expensive election of this year in the state. The combined campaign finances of Ilhan Omar, Melton-Meaux, and Lacy Johnson are$5.7 million, which is almost twice the amount that major candidates created for an even more critical race, the United StatesSenate seat in Minnesota.

Antone Melton-Meaux has been able to raise $3.2 million from April to June, which is far more than Omar’s campaign, which raised$471,000. Also, he has twice the amount of money in the bank as that of Omar for the last month before the August Primary.

The Fifth Congressional District is predominantly Democratic. Although the August DFL (Democratic, Farmer, and Labor party) primary winner is supposed to be in the November general election as well.

Lacy Johnson, the endorsed Republican nominee, brought in more than $2 million in the year’s second quarter.

Also, DFL Senator Tina Smith brought in about $2.2 million in the second quarter, whereas Republican front-runner Jason Lewis raised $833,000. In the bank, Tina has $5.8 million which exceeds Lewis’s $927,000 by a vast amount.

Along with these, there are many more significant campaign war chests related to the election, which makes it probably the most expensive state’s election of the year.

Why is Ilhan Omar so popular in the state?

Ilhan Omar has more popularity than many other political personalities these days. She always desires to “expand what is politically possible,” which includes banning private prisons, canceling student debts, boosting the number of US-accepted Somali refugees, as well as cutting the funding for “perpetual war and military aggression.”

She supports the passage of a nationwide renters’ rights bill and the End Religious Profiling Act. She also supports the registration of each eighteen-year-old to vote automatically.

These are the primary stances to which Omar refers when she talks, often referring to “politics of moral clarity and courage.”

Ms. Ocasio Cortez said while writing about Ilhan Omar that it feels like justice to her when she watches Omar questioning President Donald Trump’s envoy.

Keith Ellison strongly supports Ilhan Omar, for he thinks Ilhan Omar is a bold thinker, and he feels that it is precisely what we need in this time of crisis.

Sen. Bernie Sanders, the former candidate for Democratic president, likes Omar as a great community leader, and he feels that the US needs her leadership.

Because of her increasing popularity, she sometimes needs to handle some unexpected situations created by Trump’s supporters.

For this, Democrats of the House demanded additional security for her last year. Donald Trump has also criticized her and claimed that she supports the activities of Al Qaeda.

A day after the crowd at a Trump rally chanted “send her back” about Congresswoman Ilhan Omar, her supporters greeted her warmly at the Minneapolis-St. Paul Airport.

In reality, no negativity has been able to stop her political progress and popularity.

We must say, as a mother, as a woman who wears a hijab, this is the type of person that should run for office. She appreciates these institutions of democracy and the Democratic Party and has a seat at the table, where it was so different in the country that she grew up in.

She has hit the ground running, she has introduced a few bills, and she really wants to make positive changes.

Why did she vote ‘present’ for the Armenian Genocide?

She only disapproved of the vote being politicized, and her hesitation was not with the resolution’s content, but the timing and intent of the resolution.

What is it about Trump’s attacks on Omar?

It seems President Trump actually found it threatening for him when Ilhan Omar called herself a nightmare for the president, on the Congressional floor. He became aggressive and tweeted that the four Congresswomen, including Omar, should go back where they belong.

Leaders who question traditional thoughts in their own time are not always recognized until they become history.

Omar recognizes the responsibilities of being the first Somali-Muslim American legislator in Congress. And being so, she tries to make sure that she does not just climb the ladder herself but leaves the ladder for everyone else to climb after her.

She hopes her public service and her life inspires others. She thinks, people can say – Ilhan, who had a life in a refugee camp as a young child, came to the US speaking only two words of English, ran for office at a time when there was extreme rhetoric, and if she was able to do it, then I can also do that.

There is no doubt this charismatic leader is the right choice for Minnesota 5th Congressional District as she works for the people, not for her personal interests.