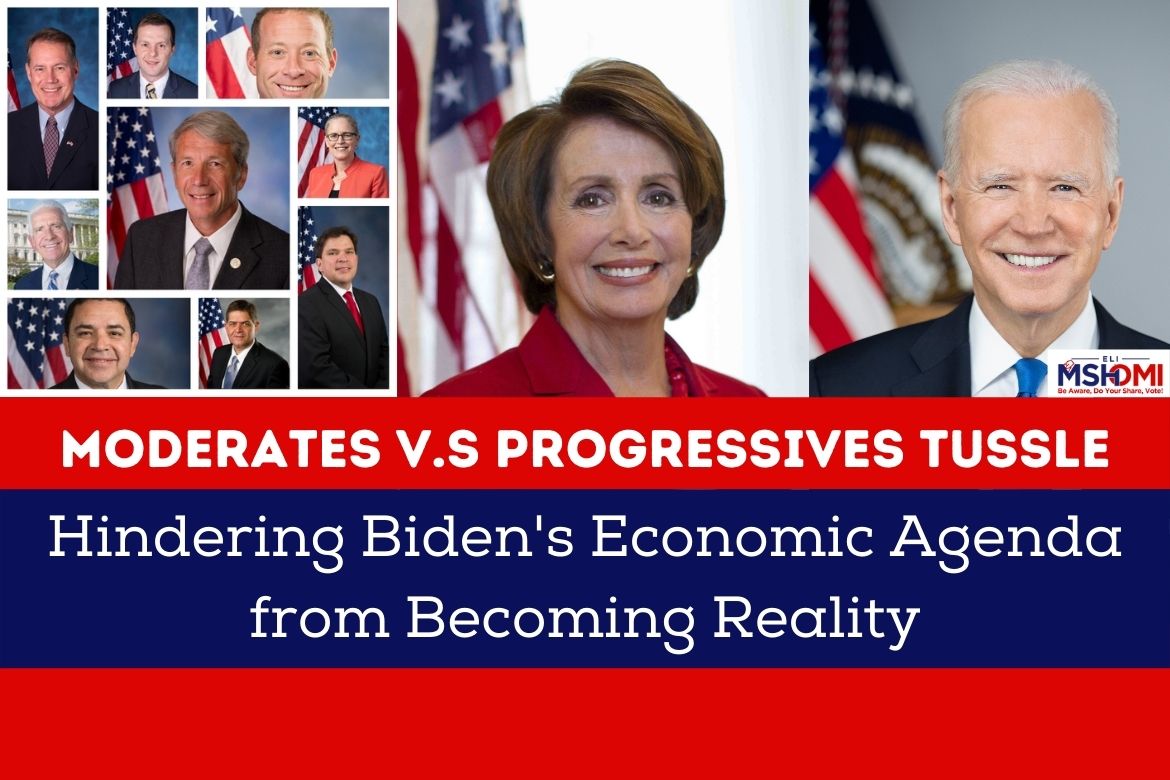 The narrowly divided House of Representatives is posing new threats and challenges for Speaker Nancy Pelosi, who is at the center of moderates and progressives tussle.

As Democrats aimed to pass Biden’s economic agenda, two different factions of Democrats are fighting on the order of the bills in which they should be introduced in the House.

Progressives want both the Infrastructure and $3.5 trillion plan to be passed at the same time, while nine moderates want to pass the infrastructure bill alone, followed by the Social Security measure plan.

The intraparty fight is exposing the internal fault lines of Democrats, who now need no external enemy to stop Biden’s agenda.

It seems that despite having tasted a defeat in the negotiated infrastructure plan, Democrats have not learned their lesson, which can put their majority at risk in the upcoming midterm elections.

Progressives are looking much more eagerly for the $3.5 trillion social safety measure than the infrastructure bill. This is the reason why they want to link both of them, so the bigger bill must not get delayed.

However, moderates have other plans. They are proposing not to pass the budget plan until or unless the House passes the infrastructure bill.

This difference of ideology between both factions is putting Biden’s economic agenda at risk.

Democrats are currently occupying 222 seats, and they must get at least 218 votes to pass the bill by the majority.

However, if nine moderates boycotts, it would be impossible to further Biden’s agenda. The same is the case with progressives, as their refusal would also put the situation in a stalemate.

But siding with moderates seems to be the last option for Pelosi, as reaching the required numbers this way is easier for her compared to the other way around.

This is due to the fact that Republicans are also likely to vote in favor of the infrastructure bill, if it comes alone, as it is a bipartisan bill. However, they would never vote for the bill if it comes with the budget plan.

Nine Moderates: Cooking Up the Dangerous Recipe of Democrats’ Disunity

Going into the next year’s midterm elections, the Democrats’ most important possession is their economic agenda. This intraparty tussle is risking Democrats their majority and is a sign of worry for Pelosi.

Moderates are also close to Pelosi’s heart, as she often aligns with the Democratic caucus compared to progressives.

Nine moderates are up against the Democratic economic agenda.

Democrats are already facing resistance in the Senate in the form of Republican plant Joe Manchin and Kyrsten Sinema, which is stopping their agenda in the Senate. Now they cannot afford a faceoff in House, as it would completely hinder Congress.

The moderate faction which is posing roadblocks to Pelosi’s agenda right now includes:

These nine centrists have called for immediate action on the Infrastructure and Jobs Act, as they could not wait for months of unnecessary delays and risks.

They have made it clear in their statement that they will in no way entertain the $3.5 trillion Democratic bills until the Infrastructure and Jobs Act is signed into law by President Joe Biden.

Democrats need all of the House votes to pass the $3.5 trillion package, which was passed by Senate Democrats just a few days back.

The above-mentioned nine moderate House Democrats have refused to wait until the reconciliation process is completed for the passage of the Infrastructure Act. Senate Majority leader Chuck Schumer has done his job and passed the $3.5 trillion resolution from the Senate. Now the key remains in the hands of House Speaker Nancy Pelosi and her 222 members.

To aid Pelosi, White House Press Secretary Jen Psaki has come forward and has highlighted the importance of both bills. Psaki also made it clear that the White House is working closely with House Speakers to get both resolutions passed from the House of Representatives.

The House is expected to return from the summer recession on August 23rd, which means President Joe Biden and House Speaker Nancy Pelosi have a short duration to find a solution to the problem.

Almost all the moderates are facing competitive reelection next year, so they want to get an infrastructure bill passed immediately. Only their successful reelection can give Pelosi another term as a House Speaker.

But the progressives vs. moderates tussle must not act as an instrument to stop the Democrats’ own agenda in Congress.