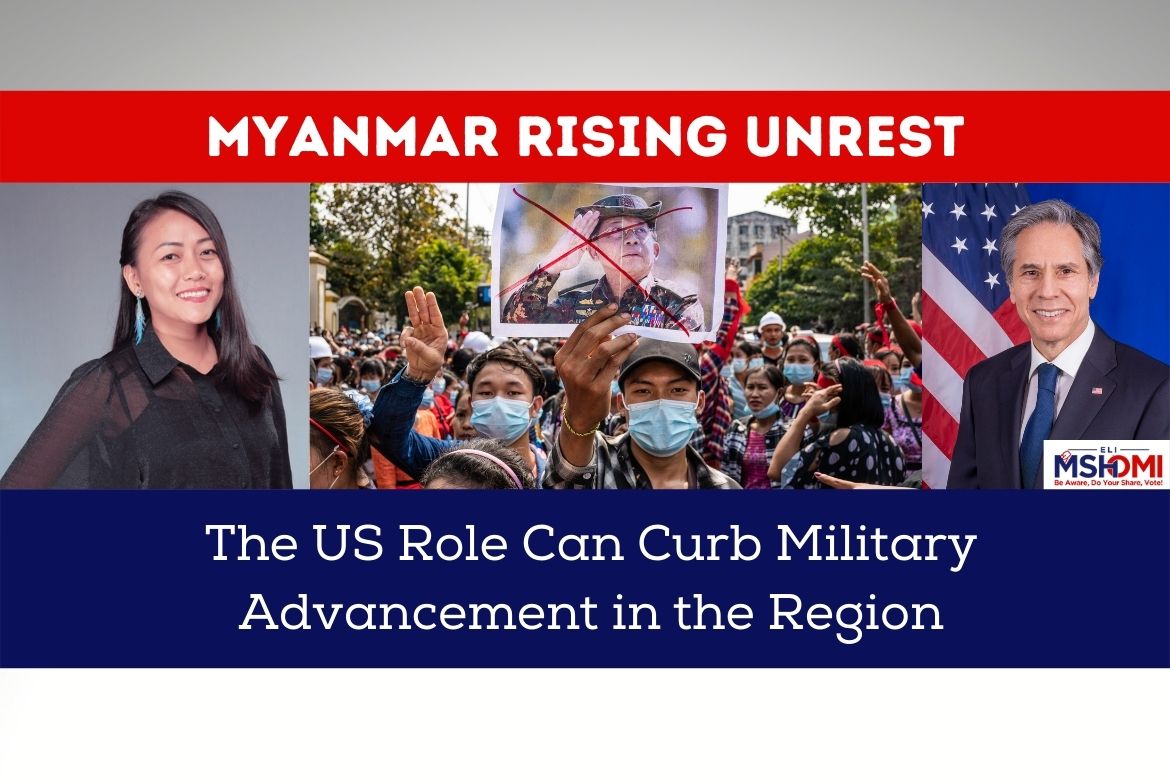 The ousting of the civilian government in Myanmar has troubled many stakeholders in the country.

As the military coup intensifies, humanitarian groups are seeking the help of the global west. With dozens being killed routinely, hundreds of captures and arrests, the democracy advocates are not reluctant to protest against military leadership.

As a recent development, activists and anti-military forces have urged people to start a “people’s defensive war” against the military dictatorship.

Thinzar Shunlei Yi, a youth activist, said that now they are expanding the protests and intensifying the “Civilian Disobedience Movement” until the current felonious regime hands over the government to democratic powers.

In the coup so far, more than 1050 protesters and activists have been killed on different occasions, along with the apprehension of more than 8000 pro-democracy activists.

As both power competitors come face to face, the numbers of killings, protests, and detentions have been increasing every day.

On the other hand, the number of dissidents against the military coup is also increasing day after day, and pro-democracy demonstrations are hitting the ground across the country. US Has a Big Role to Play in Myanmar Unrest

The current US government is observing the situation in Myanmar with keen interest. After taking the chair of the presidency, President Joe Biden announced strict measures against the individuals involved in the military coup in the country.

The office of the US Trade Representative released a condemnation statement, saying that the United States has cut down the trade ties with the current military regime of Myanmar and increased the sanctions on its military leadership.

In the recent Quad meeting, the United States emphasized the disengagement of the military coup in the country. The US also requested allies, particularly India, to provide shelter and safe places for the Myanmar refugees.

But Myanmar refugee issues have been dealt with strictly by India in recent times, even in the democratic tenure of Myanmar, so any hopes to entertain refugees is bleak.

In a recent report published by Human Rights Watch, Myanmar has become one of the top countries in the region for an exodus, as people left the country in significant numbers.

The US Secretary of State, Antony Blinken, in a statement, said that the United States is trying to solve the issue of Myanmar without making it worse and more complicated.

On the other hand, the occupant premier has blamed the international community for encouraging the activists against the government.

In a recent move, the United States Government has announced a $50M humanitarian assistance for the people of Myanmar.

But the US must put a rigorous check and balance in place so that the money does not end up in the dictators’ hands.

The recent aid is directed to counter the rising food shortage in the country. Myanmar: The Misery of Militarism

Burma has been in unrest and chaos since it got its independence in 1948 from British colonial rule. In 1962, the people of Burma faced the first military coup and remained under the rule of that military dictatorship until 2013.

In the 2000s, when the country became too weak and indebted due to corruption, injustice, and political unrest, the public initiated the wave of protests against the dictatorship under the umbrella of civilian political party NLD.

As a result, the military dictator faced enormous pressure and handed over power to the civilian NLD party.

In 2015, the NLD party, under the leadership of Aung San Suu Kyi, won the election with a huge margin of 85% votes, who assumed the leadership as the Prime Minister of Burma.

Even the rule of Aung San Suu Kyi was heavily influenced by military leadership, which shaped the policies of the government as per its will.

However, in 2020, the relationship between the military and civilian government started deteriorating. The military-backed opposition started a campaign for reelection in the country, which turned out to be a disaster, as the military ended up capturing the whole country.

The US and China have gathered on at least one common interest this time despite their everlasting concerns; i.e., both of them are blocking Myanmar’s bid to address the United Nations General Assembly, a measure that could hinder Myanmar’s efforts to get international recognition for the dictators.

Through sanctions, the US should choke the country to its fullest, including stopping the military aid altogether and freezing Myanmar’s foreign assets.

Otherwise, the way Burma military leadership is extending its tenure will push the country into the last century’s dictatorial rule, ignoring human rights to their fullest.