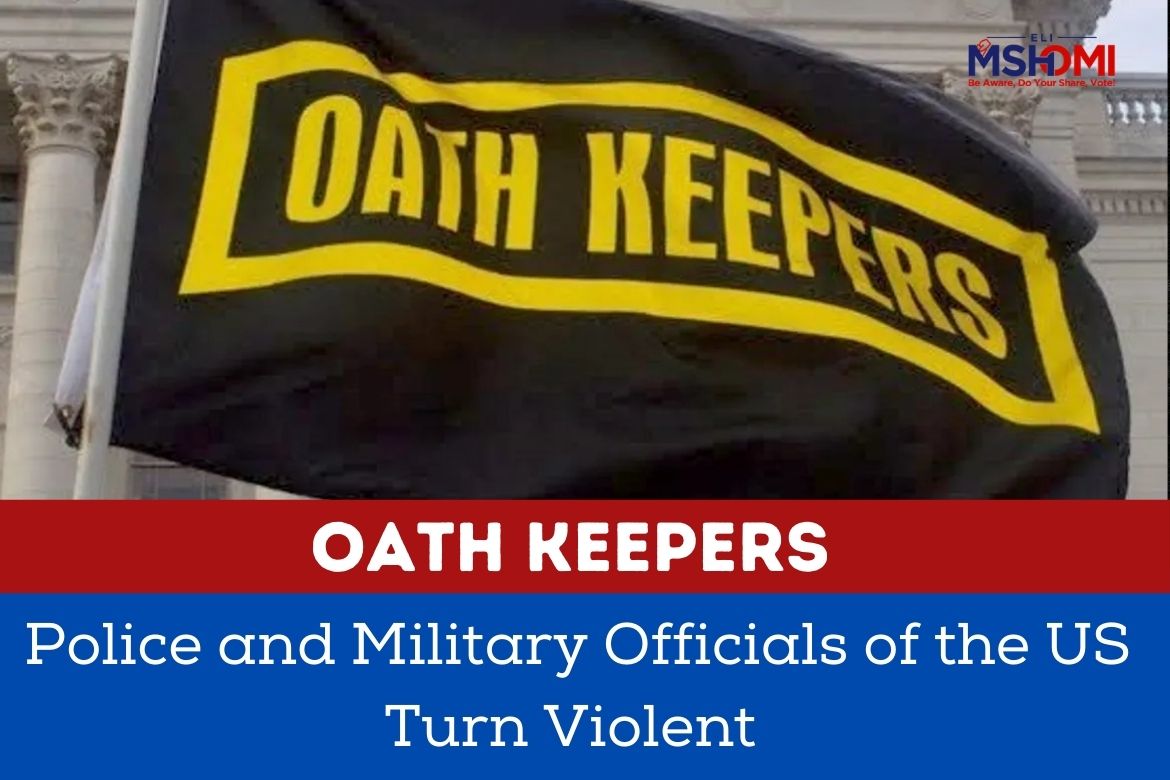 The involvement of the violent groups in the Capitol Hill attack is no longer secret. Just like QAnon and Proud Boys, Oath Keepers was one of the far-right militia involved in the Congressional attack.

The Justice Department charged a score of these people, claiming that they were planning for months to stop Biden’s certification on January 6.

This group is also regarded as the most dangerous far-right group due to its allegiance with law enforcement agencies.

We have gathered a list of Frequently Asked Questions (FAQs) about the role of these Oath Keepers. Let’s have a look.

Who are the Oath Keepers?

Oath Keepers is a right-wing militia group comprising former and the current police and military officials. The group aims to “defend the Constitution against all enemies, foreign and domestic.”

In the name of defending the constitution, the group has remained involved in violent activities over the years.

The Federal Bureau of Investigation (FBI) described them as a paramilitary organization and a loosely connected network of militia groups that believe that the federal government is trying to strip citizens of their rights.

The historian and analyst of the far-right groups, Mark Pitcavage, describes Oath Keepers as a group with extremist ideology, heavily armed with a conspiratorial mindset, and ready to start an armed struggle against the government.

What is the strength of the Oath Keepers?

The organization claims to have 35,000 members in its ranks, mostly from the current cadre of police and army of the United States.

Like any other organization, the overall number seems to be exaggerated. According to the Anti-Defamation League, the members are far less than the number claimed by the organization. Who is the founder of Oath keepers?

Elmer Stewart Rhodes founded Oath Keepers in 2009. Rhodes is a law school graduate, having a service tenure in the US Army paratroopers. He is also a former staffer of the Republican Congressman Ron Paul.

Rhodes is inspired by the theory that Adolf Hitler could have been stopped had military and police officials refused to take orders from him.

Therefore, he extends that theory to the United States, saying that the police and the military officials should keep a check on the government to monitor their wrongdoings.

The Montana Supreme Court removed Steward Rhodes from the status of a lawyer in 2015. Is Oath Keepers a pro-Trump organization?

Oath Keepers is regarded as an anti-government organization, but they still backed the Trump-led attack on Congress. This suggests that the group deviated from its status of anti-government to pro-Trump.

Mike Giglio of The Atlantic also claimed that Oath Keepers had shown their full support to President Donald Trump.

If we go by their principle of defending the constitution, they should have defended the sanctity of Congress, but they preferred to attack it. This speaks volumes about the priorities of the group.

How does Oath Keepers use its members?

The organization reminds its members of the oath taken by them to defend the constitution against enemies foreign and domestic. This way, they label the activity as unconstitutional and take the law into their hands.

One school of thought also suggests that Oath Keepers urge their members to stop the so-called New World Order plan.

Who can join Oath Keepers?

According to the sources, the membership of the organization is open for the currently serving officers in different units of the military, first responders, and law enforcement agencies.

Why is this organization more dangerous than the other far-right organizations of the country?

As its members are well-trained officers of the United States’ armed forces, this makes them the most dangerous organization of the country.

They can hijack the country in times when they are supposed to defend it.

They know the insights of the law enforcement agencies, making them aware of the potential actions against them.

Who are some prominent members of the group?

Prominent members of the group include

What are the anti-government activities of the Oath Keepers?

They also stood against the BLM protests and Antifa.

Why were three members of Oath Keepers indicted in a Federal Court?

Recently three members of the Oath Keepers were indicted in a federal court in the District of Columbia for conspiracy in the Capitol riot.

According to the charging document, all three of these people were in touch with each other to plan the Congressional attack while motivating others to join them as well.

Watkins also posted her pictures before and after entering Capitol Hill with hashtags such as “Stop the Steal” and “Storm the Capitol.”

The Federal Bureau of Investigation (FBI) and The Bureau of Alcohol, Tobacco, Firearms, and Explosives (ATF) are also investigating further involvement of the Oath Keepers in the event.

The federal agencies should have acted on these types of posts, as it could have stopped the episode.

All of these militia groups are a serious question on the integrity of the United States.

While separately, all of these organizations may not have enough powers to hinder the country, their collective effect poses an existential threat to the masses.

It remains a pertinent concern that some protocols should be enacted for serving law enforcement officials not to join these types of organizations.

The appreciation from the White House to these groups incited these groups in the past. However, now a proper crackdown must take place to serve the best interests of the country.