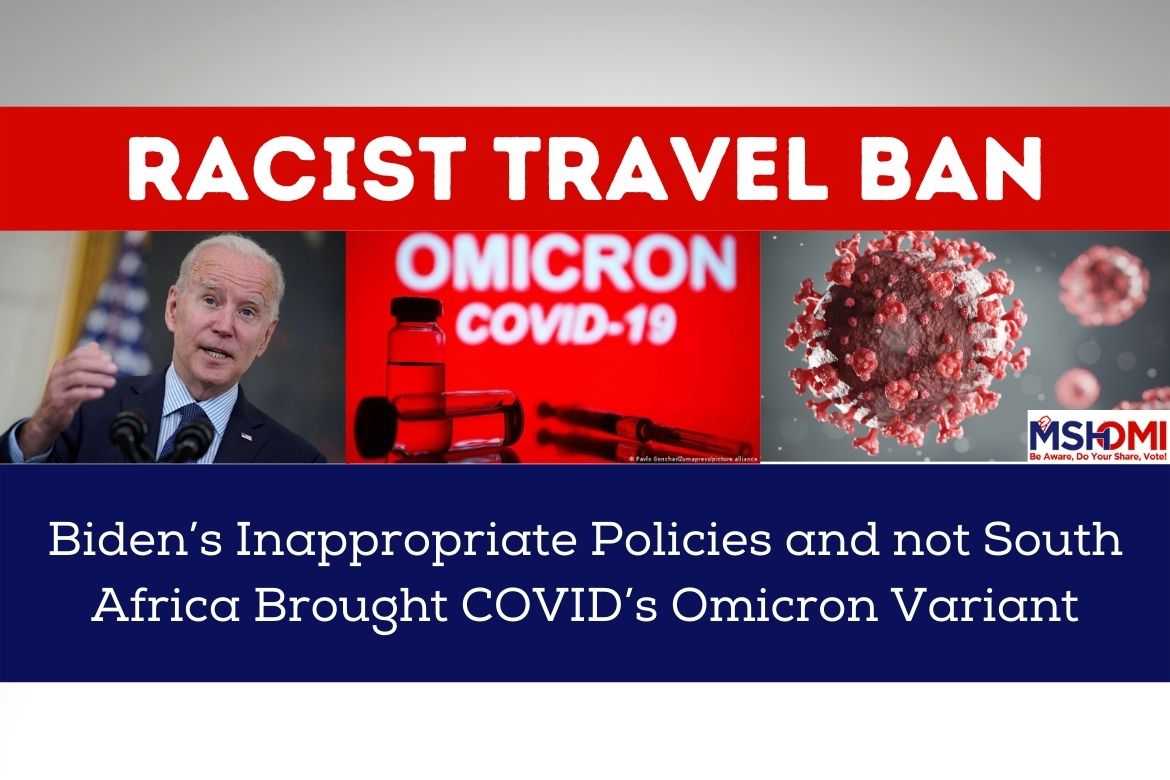 The Omicron variant, a new strain of coronavirus, increased worries about a new outbreak in many parts of the world.

However, it also unleashed the racist side of many developed nations, which have only banned travel from African nations and not any other first-world country, where the Omicron variant cases have also surfaced.

The United States led the effort to issue a travel ban against South Africa and seven other countries, a punishment given to South Africa for being brilliant in medicine and detecting the new virus variant.

Despite the fact that the Omicron variant has been found in countries like the UK, Israel, Italy, Germany, and France, the travel ban specifically dedicated against Black countries depicts deeply implanted racism in the foreign policy choices of the Biden administration.

Cyril Ramaphosa, the South African President, called the world to lift up the travel ban as it would discourage other countries from reporting new COVID strains.

Countries that are blaming South Africa for the new variant should be thankful to the African nation for having a brilliant health infrastructure that detected the COVID variant.

South Africa also discovered the Beta variant, and now the detection of the Omicron variant portrays the strength of the genome sequencing facilities which South Africa possesses.

Banning countries that report new variants of the coronavirus will only delay the end of the pandemic.

And this is what South African President Cyril Ramaphosa said as well; that the travel bans discourage countries from reporting the new COVID variants.

In times of the global economic meltdown, the citizens of any disenfranchised country will face the brunt of economic downfall after the travel ban.

With the closed borders, the economic recovery of South Africa and other African nations will be hampered, which will be damaging for the countries’ excellent health facilities. Joe Biden’s inapt policies of failing to bring vaccine inequity in the world has encouraged the upbringing of the new COVID variant, so instead of banning countries, the west should do self accountability to stop the virus.

The American travel ban against African countries does not make sense at all. It has exceptions for Americans living in those countries, as they can come back to the US by showing negative COVID results.

The virus that could come with African citizens could also enter the US with American citizens. If the intention of the Biden administration is really to stop the Omicron virus from coming to the US, he must set the same standards for everyone, which will help them in evading hypocritical practices.

And only South African scientists can further educate the world about the danger of the virus, considering they are monitoring the threat in real-time.

Nonetheless, the US may need to invite top South African medical experts to America to get true insights about the virus, in which case the travel ban needs to be lifted.

The burden of the new COVID variant lies on the shoulders of the Biden administration and other developed nations that failed to maintain vaccine equity all across the globe.

South Africa had the loudest voice in asking for a vaccine patent waiver so that everyone could be vaccinated equally.

However, the demand for vaccine access was neglected by the powerful West, which was in pursuit of profit instead of saving people’s lives.

Vaccine nationalism by the Biden administration did not allow vaccines to go to the lesser-developed African nations, ultimately resulting in the discovery of the new variant. For instance, only 24 percent of the South African population is fully vaccinated, and only 29 percent received the first dose.

This means that more than 70 percent of the South African population did not receive even a single dose of the COVID vaccine. And then, when the Biden administration blames the African country for COVID, the irony becomes unmatchable. COVID travel bans will only resist countries from reporting new COVID variants to the health authorities which will make it difficult to stop the pandemic.

However, the end of the hypocrisy does not come here. Many countries which have not reported even a single case of the Omicron variant have been put on the travel ban list. For instance, the following nations have no Omicron variant presence in them by now.

However, all of the above countries are under the travel ban of the United States.

While on the other hand, the following countries have reported confirmed cases of Omicron and still evaded the US ban.

Seeing the pattern, it is easy to see that the ban is against the Black nations even when they have no reported presence of the Omicron variant in them.

Instead of South Africa, which successfully reported the new variant, COVID travel bans should be against countries like Tanzania, which has no courage to show the world their COVID infections rates.

During John Magufuli’s era, Tanzania did not report COVID infections at the peak of the pandemic. On April 29, 2020, Tanzania stopped reporting COVID-related data to the authorities, with Magufuli saying that the virus had been eliminated in the country “thanks to God.”

Resultantly, COVID spiked in Tanzania; however, the numbers went unreported. However,  Samia Suluhu tried to be in the good books of the western powers when she started reporting COVID cases after the demise of John Magufuli, just because she needed money and to settle her terms with the IMF. However, the country is heavily underreporting the cases. Tanzania’s official tally stands at almost 26,000 COVID cases, with only 730 casualties to date.

In a country where only 1.5 percent of people are fully vaccinated, having such low COVID infection numbers is next to impossible, suggesting that the country has no willpower to save the world from the pandemic.

It is very much a possibility that new variants exist in countries like Tanzania, where they go unreported just because governments do not report the cases in actuality.

Thus if the travel bans are for real, they should be directed against Tanzania and similar countries so that no country can hide the real COVID numbers.

What America should try to do is to appreciate the countries that are bringing new strains to the public knowledge with medical aid and more COVID vaccines so that it allows more countries to report the true numbers and types of strains.

Ashwani Jain: A Maryland Governor Candidate with Incredible Ideas to Reform the State