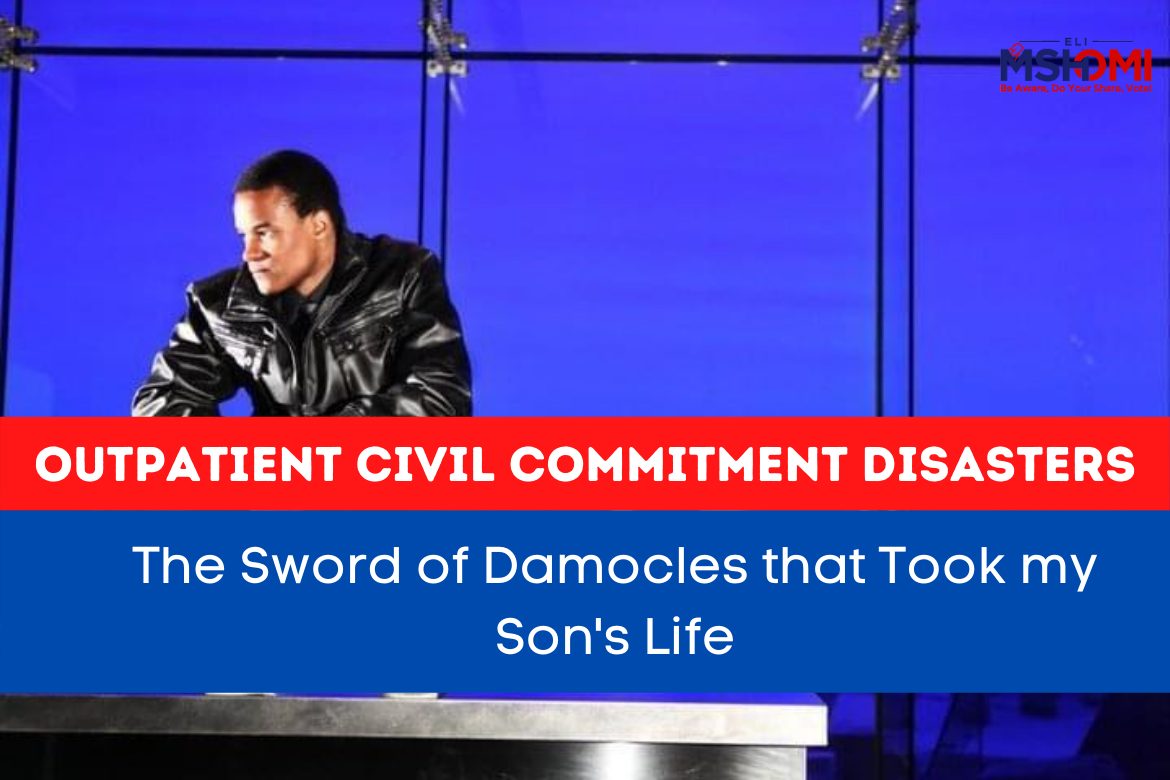 The involuntary civil commitment in the presence of mental health issues has become an issue of debate among health professionals. While many perceive it as an instrument to invade the personal space of the subjected person, it can end the sufferings of the mental health patients in the long run.

My son lost his life due to the lack of a proper involuntary civil commitment and outpatient civil commitment regimes, as I could not take him to the hospital, as he was above 18 at the time of his suffering.

“Involuntary civil commitment in the United States is a legal intervention by which a judge, or someone acting in a judicial capacity, may order that a person with symptoms of a serious mental disorder, and meeting other specified criteria, be confined in a psychiatric hospital or receive supervised outpatient treatment for some period of time.”

Outpatient Civil Commitment: The Loopholes that Cost my Son his Life

My son, Timothy Mshomi, was brought to the judge, and it was determined that he should be given supervised outpatient treatment.

The government lawyer asked me for my input before the case. He advised me to make my presence compulsory in the proceedings so that the judge can recognize my son lives in a stable home.

A nurse used to come to our home to administrate the medications for my son.

But with time, the situation of my son started worsening. I communicated with his case manager for professional advice, so he came to our home to assess the situation.

He even suggested filing for inpatient treatment instead of the current outpatient approach, so medical professionals can closely monitor him and get his ailments fixed as soon as possible.

But the problem was my son wasn’t receiving any medication. The nurse quit her job in the agency where she used to work, and the agency didn’t replace her.

This agency’s inefficiency was tolerated or ignored by my son, as he remained out of medicines for almost three months.

This systematic fault contributed to the death of my son as well.

Anyway, my case manager found a new agency, and it started to administrate the medications to my son again.

But little did I know about this legal loophole:

So, after my son committed suicide, is when I was told that a psychiatrist in Nystrom & Associate in Otsego, Minnesota, terminated his commitment.

The psychiatrist did not even bother to take my or the case manager’s input.

We could have told her about him not taking the medications. Unfortunately, my son didn’t report to the case manager when the nurse wasn’t showing up.

So obviously, during the last month of his struggle, I was running up and down to save his life while he was not taking any medication.

So the system here is that the court will commit the patient for the medications, but the medical staff can decide to terminate it any time, without even seeking the opinion of the guardian.

So, the death of my son could have been avoided if the psychiatrist had not terminated his commitment.

Similarly, the presence of the Mental Health Bill at that time could also have saved him. The system’s inefficiency can be gauged from the fact that the system doesn’t have any way of knowing if the court-ordered medication is being administered or not to the patient.

Hence, the lives of the patients remain in the hands of the agencies directed to administer these medications.

Outpatient civil commitment often overlooks the proper mechanism that should be followed. Just as in my son’s case, the mental health professionals became the signing authority in deciding whether or not to pursue the treatment without the involvement of the guardian in making this decision.

Had it been the case, the mental health professionals would have examined him during outpatient civil commitment while advising him to go to the hospital. They could have found he was not being given the medications as well.

The Mental Health Bill 2021 needs some additional amendments to tackle these severe issues to save more patients from this menace.

There should be an amendment to the Mental Health Justice Act 2021 to address these two issues.

The mental health crisis is worsening in almost all the states in the US. This can be seen from the increasing number of pediatric psychiatric hospitals in various states.

The legislature is even colluding with the Minnesota health department and there actions are even responsible for my son’s death.

For instance, recently, a 50-bed hospital in Brooklyn Park, Minnesota, is without a doubt a positive development, and other states should follow suit.

If the government is unable to provide outpatient civil commitment, inpatient treatment should be preferred in these cases of mental health treatment.

There is no doubt that inpatient treatment can be of great benefit if administrated efficiently.

The denials of the inpatient treatment often opine that the government does not have any beds available for the mental health facilities, and doing so is just a strain on the resources.

However, this itself is a denial to measure the severity of the mental health issues.