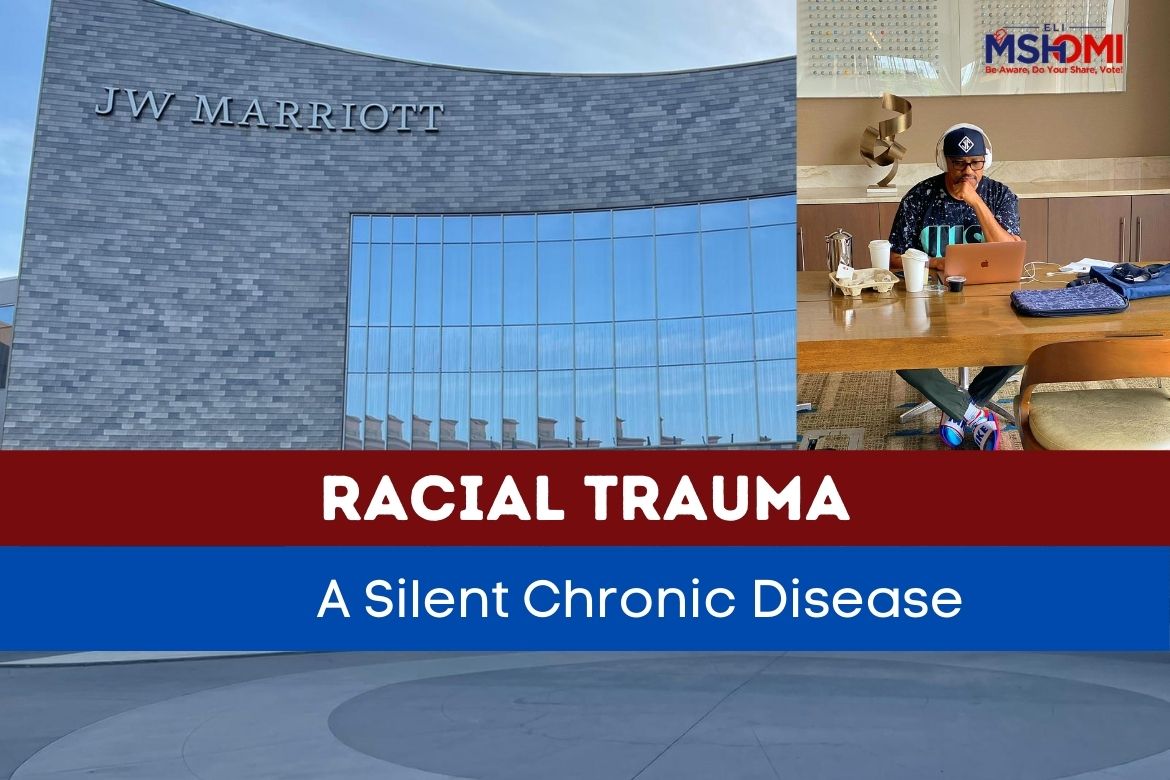 I feel sorry to see the widespread discrimination in America pushing the legacy of racial trauma in Black Americans forward.

While I was at the JW Marriott Minneapolis Mall of America as a guest, a recent event triggered some racial prejudicial memories, which I usually encounter when I visit establishments that are supposed to be “whites.”

While working on a space designated for hotel guests, a staff member came and asked me if I was a guest since they don’t allow non-guests to use that area.

I immediately told him that, “I don’t have to answer that.” Because I knew exactly what his racially driven undertone was; i.e., “You are black; you can’t afford the place.”

I complained to one of the staff members, who told the manager. Surprisingly the manager came to defend the worker’s action rather than issuing an apology.

I gave the hotel the benefit of the doubt, and I said I would do my observations while still being the guest.

The next day’s groups of whites kept on coming to work, and I saw nobody coming and asking them if they were hotel guests.

This was not the first event of its type against me. The same thing happened to me in prior years while I was a guest at the Gaylord National Resort and Convention Center in DC.

Back then, the only difference was that the manager came and apologized to me, and the staff member was moved out of that area.

The problem is that most people don’t even consider bullying as an instrument of racial discrimination, and end up defending it in one way or another.

Some people will say that the hotel staff must inquire about the attendees, but why do they question Black people only? Where is their duty after seeing the white people in the exact circumstances?

My experience was not only isolated to hotel establishments. While I was trying to open a startup, I did not have an office, so I worked in different coffee places.

I had a white business partner, and we were working together. He suggested Lunds & Byerlys in Eden Prairie to use as an office location since it was close to his house.

We started working there, and I was comfortable with the place until I decided to go alone one day.

As expected, I could see many “white” people using it as a working place at the same time when the manager asked me to leave the establishment.

The incident was purely driven by the racism embedded in the manager’s head against people of color.

I told my business partner about the incident and said that I couldn’t go there anymore. He suggested a new place called Bobby & Steve’s Auto World, also in Eden Prairie.

We started working there, but one day I came earlier in the morning since I was meeting a friend who I referred to get her car fixed.

I was in the same spot where I usually sit with my business partner, while she was at the counter paying for the service.

She heard one of the staff members telling the boss, “Are you aware there is somebody there who uses this as a working place?”

On hearing that, she came and told me, which I related to my business partner.

Seeing this much discrimination at almost every place, I started feeling racial trauma. From that point onward, I decided not to go to any establishment again and work without him being there before I arrived.

So, I used to call him and make sure he is had arrived before I arrived, but if he was late someday by chance, I used to hang out in a nearby Caribou Coffee until I made sure he was already in.

These types of racial discrimination and white evangelicals’ actions are catalyzing the racial trauma in Black Americans. Racial Trauma in Black Americans: A Curse that Needs to be Cured

These days, it is almost impossible to find a Black American who has not encountered some type of discrimination.

In fact, all Black, Indigenous, and people of color, commonly combinedly known as BIPOC, have to face this racial trauma on a daily basis, which is fostering the mental health crisis in these communities.

The perpetrators fail to comprehend that their behaviors promote long-term damage, the results of which are anxiety, depression, nightmares, and flashbacks.

While going out of their houses, many Black Americans think it could be their last drive, just like George Floyd or Daunte Wright.

Looking at the unemployment numbers, Black students often think about whether their higher education would go to waste, believing that a white American would be preferred over them in the job interview.

They fear they will be exploited in the job market by lower salaries compared to their white counterparts. Or that they can be jailed for a crime they never committed.

Perhaps they will fail to own a house in the United States or be bullied by their neighbors just because of their color if they own a home.

While casting their vote, many wonder whether their voice matters amid the laws specifically made to silence them?

When Black Americans see the pervasiveness of the injustice directed towards their community in all these forms, they rightfully assume themselves as the next victim of that brutality.

When they see hopelessness all around, they become the victims of racial trauma, hindering their progress in the country.

The sense of terror, insecurity, and depreciation is being fostered this way in the Black community, adding fuel to the fire to the already marginalized community.

Many end up consuming drugs trying to evade this systematic persecution; others keep on, fighting the building pressure and stress in their minds.

The need of the hour is to criminalize bullying in all the US states, punishing the perpetrators of this discrimination hard without any biases.

The biased narratives against the people of color are embedded in the educational systems that enable the children to drive their mentality by color after growing up.

Solving these crises is not an overnight process, but a constant struggle that needs a dedicated effort by both the government and civil society.

Seeing the ineffectiveness of the government in addressing the severity of the issue, civil society has to lead the effort.

No one deserves racial trauma, as it drives hatred in society, pushing people into mental distress and taking drastic decisions, including suicides.