Regime Change in Russia: Biden is Imagining the Unimaginable 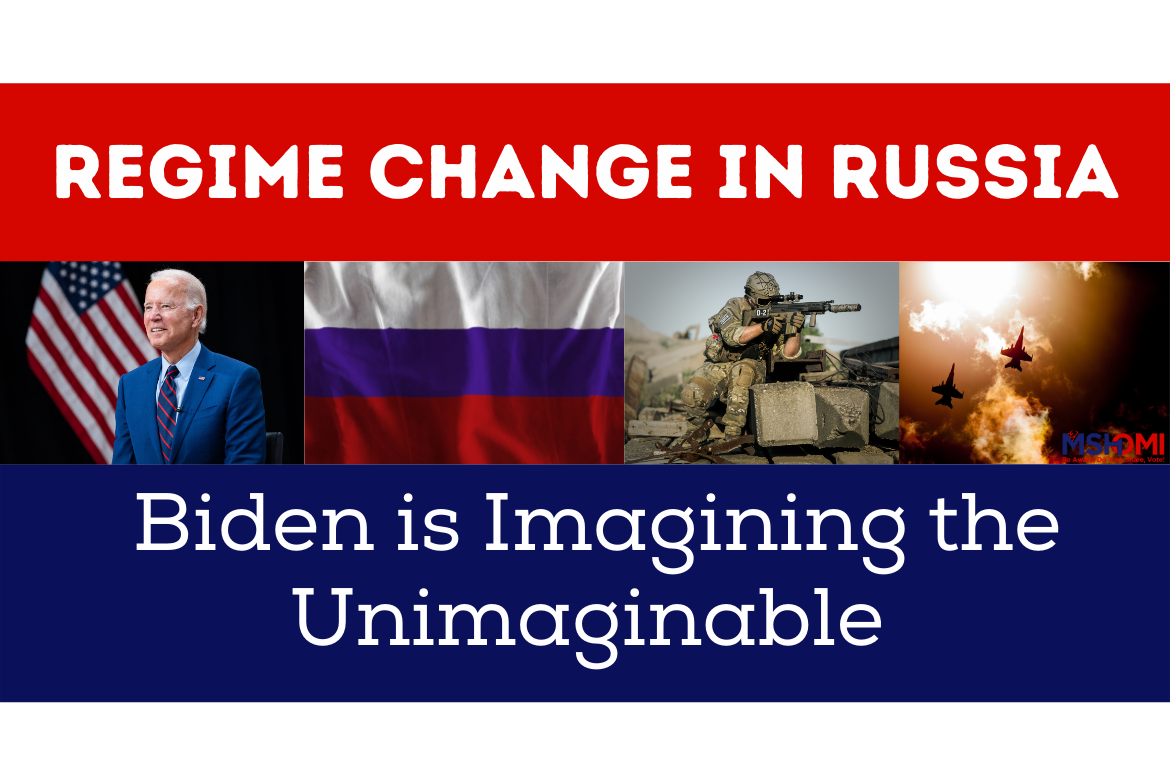 The policy of regime change in different countries has often remained a distinction of the US foreign policy.

However, the one similarity which all the affected countries had was that those nations were weak militarily and had no proper government anyway. Biden Asked for a Regime Change in Russia

During his high-stakes visit to Europe, Biden stated that Putin “could no longer remain in power,” signaling toward a possible regime change effort against Russia.

Speaking these words standing at the very border of Russia in Poland at a time when the Ukraine war is at its peak depicts the urge of President Biden to overthrow the government in Moscow.

This came at a time when NATO was distancing itself from the conflict to the maximum possible extent to avoid any direct military conflict with Russia.

Biden’s own ranks issued an immediate rebuke after the President’s speech. The gravity of the matter can be analyzed from the fact that the White House issued a statement that changing the regime in Russia is not the policy of the Biden administration.

Similarly, the US Secretary of State Antony Blinken had to clarify in Jerusalem that regime change in Russia is an off the table approach.

A regime change requires an armed military intervention from one country into another. While these sorts of activities were possible in the countries of the Middle East where the receiving countries had no established security and defense infrastructure, however, Russia is surely different from those nations.

Thus an armed military intervention in the country is out of the question for the very fact that it is home to the biggest nuclear inventory in the world.

And invading a nuclear-armed nation is certainly not as easy as annexing some Middle Eastern country.

The only way the US can topple the Putin regime is by infusing public unrest that is chronic enough to turn Russian people against Putin.

While economic sanctions were considered as just one of the tools for regime change, however, these sanctions are only impacting the already vulnerable people of Russia and leaving Putin unhurt.

And even if the Biden administration assumes for a moment that it could force a regime change using sanctions, Putin has a history of dodging American sanctions. So the issue of changing the regime by sanctioning Russia is out of the question.

Biden Must Avoid Even Thinking of a Regime Change in Russia

America has a history of changing regimes across the globe. Be it Iraq or Afghanistan; the US forces managed to install the government of their own choice in many countries.

However, even attempting any such move against Russia would be a suicidal move, to say the least.

Even making comments across these lines is detrimental to any potential peace opportunity. When Biden made these comments, French President Emmanuel Macron was on the mission to establish a ceasefire among the warring parties.

Therefore he also rebuked Biden’s comments, stating that this would just be another step on the ladder of escalation. According to Macron, the only way Russian forces could be pushed to back off is through diplomacy, which works only under a calm environment.

This is once again a messaging problem at the end of Democrats, who are finding it difficult to sync their message among various platforms.

This comes at a time when seven out of ten voters believe that Biden mismanaged the Russia-Ukraine crisis.

The end of the Afghan war pushed Americans to stay away from Democrats in the gubernatorial elections of Virginia last year.

The same can be the case this time as well, when the Russia-Ukraine crisis can inflict unbearable damage on the popularity of Democrats ahead of the midterm elections, where the party is already gasping for some breathing space due to its razor-thin margin.

Use of Weaponry in Russia-Ukraine War: Who is Using What?

Trump Thought of Becoming a Hero, Ended up Being a Criminal