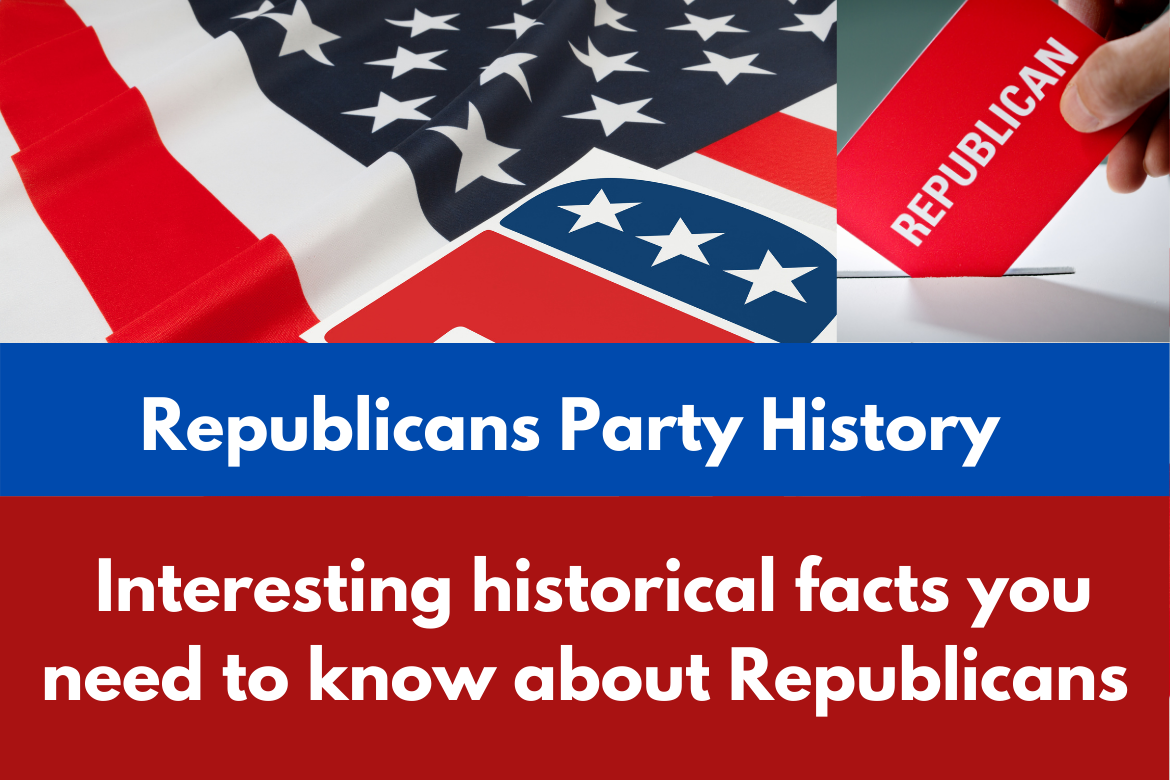 Democrats and Republicans are two major political parties in the United States. Rarely has there been any other party to form a government in the country.

The article will dig down deep into the facts about Republicans and their history as it presents the most interesting historical facts you need to know about Republicans, discussing the party’s origin and how it developed over time.

The Republican party, also known as Grand Old Party (GOP), is a political party that claims to be working for a strong and free America, where every citizen gets an equal opportunity to achieve the American dream.

Presidents such as George Bush and Donald Trump have proven that this manifesto is nothing more than just sweet talk to lure the voters.

Facts About Republicans Party History and their Their Symbol:

In Republican party history, the election symbol of the elephant can be traced back to the beginning of the 19th century.

The image of the elephant was associated with Republicans during the Civil War in political cartoons and new illustrations.

Just like the Democratic donkey, the Republican elephant was also popularized by Thomas Nast in The New Yorker magazine under the title The Third Term Panic. He presented the elephant as docile when calm and destructive when excited.

Why is the Republican party called the GOP?

The title was given due to the role played by Republicans in the Civil War for preserving the union. The term refers to the perceived superiority of the party over their rival Democratic party.

The name started as the Gallant Old Party, referring to the self-proclaimed triumph of the Civil War. It later became the Grand Old Party and is now termed as the GOP.

The Origin of the Republican Party

Looking back in the Republican party history, this originated in the 1850s when the antislavery leaders came together to oppose the extension plan of slavery proposed in the Kansas-Nebraska Act.

A proto-Republican Party meeting was held in Ripon, and another meeting of 10,000 people was held in Michigan, “Under the Oaks.”

Gradually, momentum developed, and an organized convention was held in Pittsburg on February 22, 1856. Finally, on June 17, the same year, the new Republican Party was established.

The goal behind the establishment of the Republican Party

The basic purpose behind the formation of the Republican party was to oppose the repeal of the Missouri Compromise. They came together to struggle against the policies of the current administration of that time and the extension of slavery into free territories.

In the Republican party history, their legislatures can be seen as maintaining the beliefs that the principles embodied in the Declaration of Independence should be restored, which they claimed to be the only way to save the institutions of the country.

The Republicans were established to fight for the freedom and liberty of Americans and to provide them the basic right for which the country was founded.

This was the original goal behind the formation of the new political party that we now know as Republicans or GOP. It is worth mentioning here that the party was established for the freedom and liberty of Americans, but as we see now, that goal has changed. Now, under the leadership of Donald Trump, the Republican party is different from the party of the 19th century.

If we dig down in the Republican party history when Lincoln became the president, the Republican party was a small, newly established party but, under Abraham Lincoln’s leadership, it transformed into a national organization that dominated the politics of the United States in the future.

How many Republicans became Presidents?

It is worth mentioning here that although the Democrats have ruled the country more years than Republicans, there have only been 14 Democratic presidents.

True leaders came in the Republican party history who challenged many stereotypes in the country. For instance, Abraham Lincoln played a crucial role in ending slavery in the United States.

The Republican party is a major player in United States politics. The party was formed in the 1850s to oppose the extension of slavery.

The Republicans have given their fair share of hard work and struggle for the United States. The party was established to uphold the basic principles on which the foundation of the country was laid.

The Republican party that we see today is different from the one established, which has started suppressing the right to vote for Americans and stopping legislation that can really help America progress.