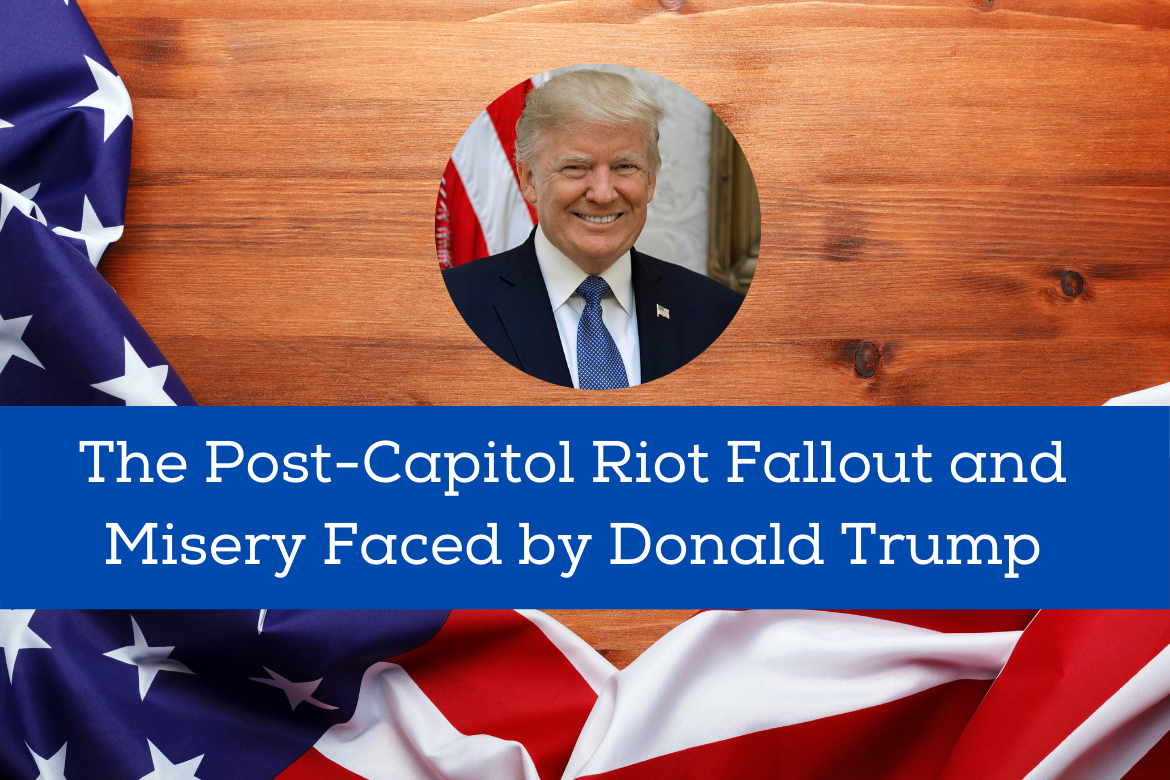 With thousands of security force personnel available in Washington DC to protect the sanctity of an all-important day, January 20, 2021, the capital is currently presenting an image of some war-torn country.

Supporters of President Donald Trump attacked the Capitol on Wednesday, January 6, an act that was triggered by Donald Trump. Mitch McConnell, a right-hand man of Donald Trump, has also admitted that the president triggered the riots. In an unexpected move, Mitch said that “The mob was fed lies, they were provoked by the president and other powerful people.”

With the Trump fallout, the justice department is still unable to account for the damage done to congressional documents when Trump supporters stormed the Capitol.

This move has not only ended the political career of Donald Trump but also shattered the global image of the United States.

Many police officers had to resign from their positions. Some were fired, and some are under investigation for not being able to stop the mob from sieging the country’s legislative capital.

After this assault on the Capitol, major business entities and social circles are boycotting Trump’s companies in a bid to save face. Along with his allies, Trump has lost several contracts, banks have sealed their accounts, companies are not willing to offer them jobs, and much more.

How are Donald Trump and his company being boycotted by the various circles across the United States? Let’s have a look.

Immediately after the Capitol Hill riots, many businesses and institutions have distanced themselves from President Donald Trump.

As Trump became the first president of the country to be impeached twice, e-commerce providers, major banks, and schools have issued statements that they have no link with the president and his administration and in no way support violence.

Here are how some businesses have boycotted Trump and his allies.

Here is how Trump and his allies faced a backlash from educational institutions.

Several Republican leaders have also distanced themselves from the party. The most prominent example in this regard is Mitch McConnell, who hardly went against Donald Trump during his four years of presidency. McConnell has formally accused Trump of disturbing the peace of the country by agitating the riots.

Similarly, former Secretary of State Colin Powell has said that he cannot call himself a Republican after all of this drama.

Jorge Riley resigned from his position at the California Republican Assembly prior to his arrest for participation in the capitol riots.

Lawmakers are also demanding the resignation of several Republican leaders who were involved in the breaching.

West Virginia State Delegate Derrick Evans was seen in a video message that he streamed while storming the capital with the mob. Virginia State Senator Amanda Chase attended the pro-Trump rally and left just before the riot started.

Missouri Senator Josh Hawley was photographed raising a fist in solidarity with the rioters.

Senator Ted Cruz has played a key role in amplifying the false claims of voter fraud and urging the attackers. However, he denies these claims and blamed the president.

This list goes on and includes many more Republicans who either took part in the attack or encouraged the mob.

House Democrats are concerned over the position of these lawmakers and have demanded they resign.

Military members under scrutiny for involvement in Capitol attack

Senator Tammy Duckworth has sent a letter to the Secretary of Defense to investigate former and current military officers who played a role in the capitol siege.

Alisha Butt, the woman who died in the incident, was a former Air Force pilot.

Larry R. Brock, who was arrested after being recognized from a photograph holding flex-cuffs on the Senate floor, is a retired Air Force Lieutenant Colonel.

Emily Rainey brought 100 people from North Carolina to participate in the attack as an active-duty Army captain. However, she had submitted her resignation in October but was still an on-duty officer.

More than 250 members of the American Literary Community have signed an open letter urging publishers not to sign deals with President Donald Trump or his associates.

Signatories include some of the most renowned names of the literary world, including former DC Comics President Paul Levitz, Journalist Sarah Weinman, and Celeste Ng.

Novelist Barry Lyga, using the title “No Book Deals for Traitors.” wrote the letter. The letter aims at invoking the “Son of Sam” law that prevents book deals and publishing books written by convicted criminals. The action was taken as a backlash to the assault on Capitol Hill, as many members of outgoing administrations signed deals with booksellers after leaving the White House. Top social media sites and online service providers either have terminated President Donald Trump’s account or have terminated his membership. Reddit banned the group “r/DonaldTrump,” which is not the official group of the president but has emerged as the largest community dedicated to supporting Donald Trump.

Almost every influential digital media site has taken serious steps against Donald Trump for using its platform to spread violence and hatred.

150 suspects being pursued by the Justice Department

The United States Justice Department has joined hands with the FBI in a nationwide manhunt for those who stormed the Capitol.

According to the New York Times, the investigators are pursuing more than 150 suspects who might have played a central role in the attack.

Many of these suspects have been arrested and are being interrogated. The FBI is working with the Capitol Police and Metropolitan police department in Washington DC to track down the suspects.

The FBI has its hands on more than 70,000 photographs and video clips that are being used to identify the suspects.

Agents are working worldwide to find the people in the photographs. They are also working on data from airline passenger manifests and videos of air travelers in and out of Washington DC.

House Democrats call for an investigation:

Chad F. Wolf, the acting secretary for Homeland Security, resigned from his position, saying that the court has ruled Mr. Wolf was unlawfully appointed.

Wolf was expected to ensure the security of President-elect Joe Biden’s inauguration on January 20, and many experts believe that he stepped down due to the horrific violence and destruction that we witnessed when Trump’s supporters stormed the Capitol.

Moreover, the Capitol Police are also investigating its officers for their conduct during the violence and destruction. So far, two police officers have been suspended, as they were spotted in the video clips. One of the officers was in a photograph with the rioters, while the other was seen in a video clip walking among the crowd wearing a Trump hat.

Lawmakers believe that although the ultimate blame lies with the culprits who climbed the walls and stormed the Capitol, it was due to the failure of security officials that these people entered Congress and even Nancy Pelosi’s office.

However, some have even praised the role played by the Capitol police officers. House Democrat Representative Tim Ryan, who oversees the Capitol Police’s funding, praised the officers for doing everything they could.

At the same time, other House Democrats, including Chris Murphy and Chair Rosa DeLauro, called for an investigation on how the security was breached so quickly.

The United States has suffered a lot at the hands of President Donald Trump, and this last blow was the most lethal, but the country will survive this too like it has been surviving for the previous four years. However, it is difficult to say if Donald Trump and his associates will survive the hole they have dug for themselves. The backlash from the Capitol attack has started, and it will not end until all who are involved are prosecuted.