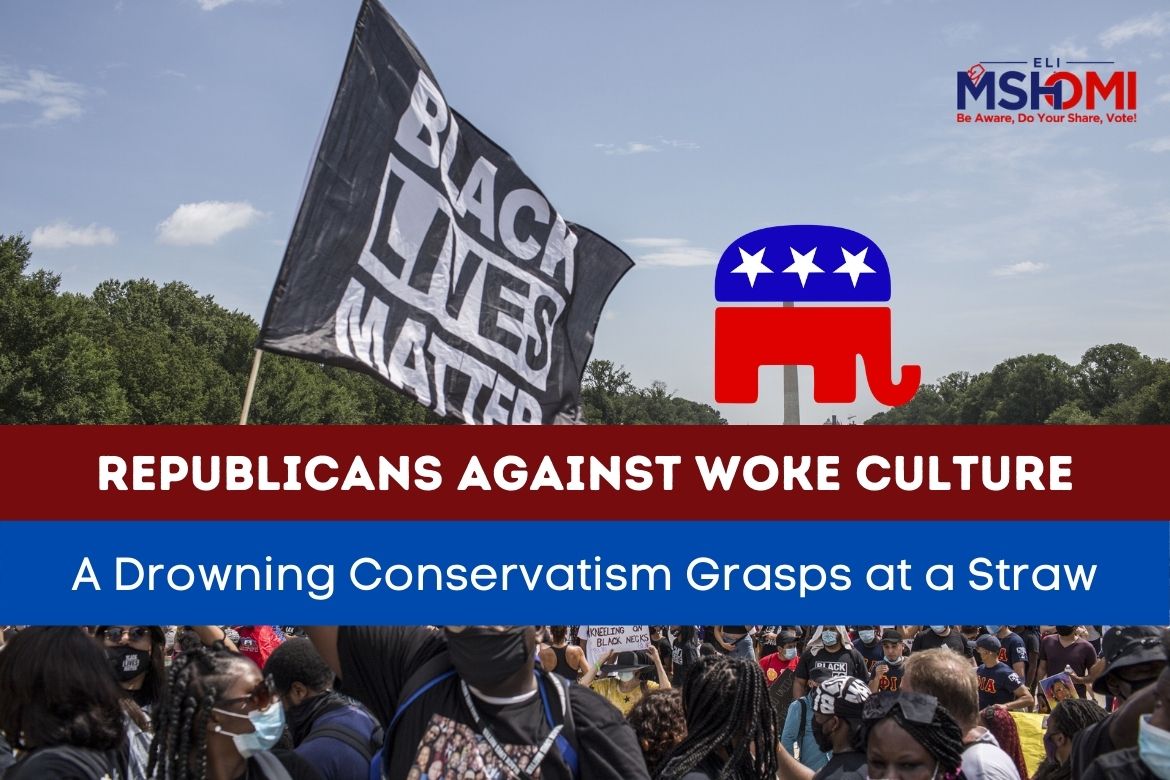 In their bid to stick with their regressive agenda, Republicans are once again on a roll, this time against the woke culture, suppressing the voices that make people aware of the systematic discriminatory policies.

Just like their cancel culture of opposing anti-Trump republicans, Republicans against woke are hindering the progressive path for which many of the civil society activists have been working for a long period.

The word woke, an important part of the critical race theory, came into the spotlight after the brutal shooting of Michael Brown, a Black American who was killed by a police officer.

Instead of firing back with full force, Democrats are beating around the bush with no solid plan of action to counter Republicans.

Lately, the word “woke” came into the limelight in many of the Republican speeches, including the former president Donald Trump’s interview, who claimed on FOX news that the incumbent administration is “destroying” the country with “woke.”

Opposing Woke Culture: The Only Way to Save a Dwindling Party

Opposing woke culture by Republicans is a part of a broader ideology to save the drowning conservatism in the aftermath of Trump’s downfall.

While some believe that conservatism is dying a natural death, others are suggesting that the everlasting support of white evangelicals cannot let conservatism die.

However, for Republicans, the primary aim right now is to weaken Biden’s castle in the 2022 midterm election by capturing both the Hosue and the Senate.

In this short span of time, impressing liberal or even moderate voters is out of the equation for them.

However, the only thing they can do is to drive more conservative voters who did not vote for Trump in the 2020 elections.

For instance, almost 25% of evangelicals voted for Biden, and this can be the targeted audience of Republicans by opposing the woke culture.

Whether these are the anti-racist campaigns amid the rising systematic racism in the United States, or the rise of awareness after George Floyd’s murder verdict, or even the denouncement of the voter suppression ideology of Republicans, woke is a persisting threat to the Republicans’ agenda that can tear the party apart.

Adding fuel to the fire, the rising liberalism in the US Supreme Court after Trump’s demise is also a fair sign of worry for the Republicans.

Republicans following this line is not their fault completely, and a part of the blame lies on the voters’ behaviors as well.

They have to devise their strategy by seeing their voters’ patterns and data. Not doing this would cost them their entire voter base, which would be the last thing they could imagine.

For instance, according to surveys, almost 79 percent of Democrats comply with the Black Lives Matter movement ideology, while only 19 percent of Republicans do the same.

Similarly, only 17 percent of Republicans endorse the idea that companies and sports teams are doing good by creating awareness about social issues compared to 53 percent of Democrats.

So, for Republican leadership, going against the woke culture has become a sort of compulsion rather than a choice.

Big Corporations: A Primary Driver of the Republicans War Against the Woke Culture:

The rise of corporate involvement in social awareness has encouraged Republicans to launch their all-out effort against the woke culture.

Corporate heavyweights have extended their support against the recent wave of voter suppression in almost all the Republican-dominated states.

Warren Buffet, Amazon, Google, and Starbucks have shown their solidarity with the voting rights efforts, a step that forced Mitch McConnell to ask the corporations to stay out of politics.

Similarly, corporations including IBM, Microsoft, and Airbnb have shown their support in favor of BLM movements. Certainly, after the corporations stand for woke, Republicans have no option other than fighting a solo war.

While the Democratic party is in favor of woke verbally, they are letting go of all the Republican efforts without having a fool-proof plan.

Democrats are ignorant, once again, of the current happenings, just like they ignored the Republicans’ campaign of “police defunding” and “socialism” against themselves.

Probably they also need to be proactive in favor of woke to push the already falling wall of conservatism for one last time.

First supporting the oppression, and defending that afterward, has become a norm in the Republican party.

Any anti-woke agenda would threaten the Black culture and suppress social justice in society.

If Democrats stay woke on social media as well, they can politically correct many ideologies, including extremist white people who are supporting Republicans in their narrative.

The persisting racial crisis, including the omnipresent racial job profiling, everlasting police brutality, and the voter suppression regimes, demand campaigns in favor of woke instead of against it. Only then will the racial and social gap be bridged.