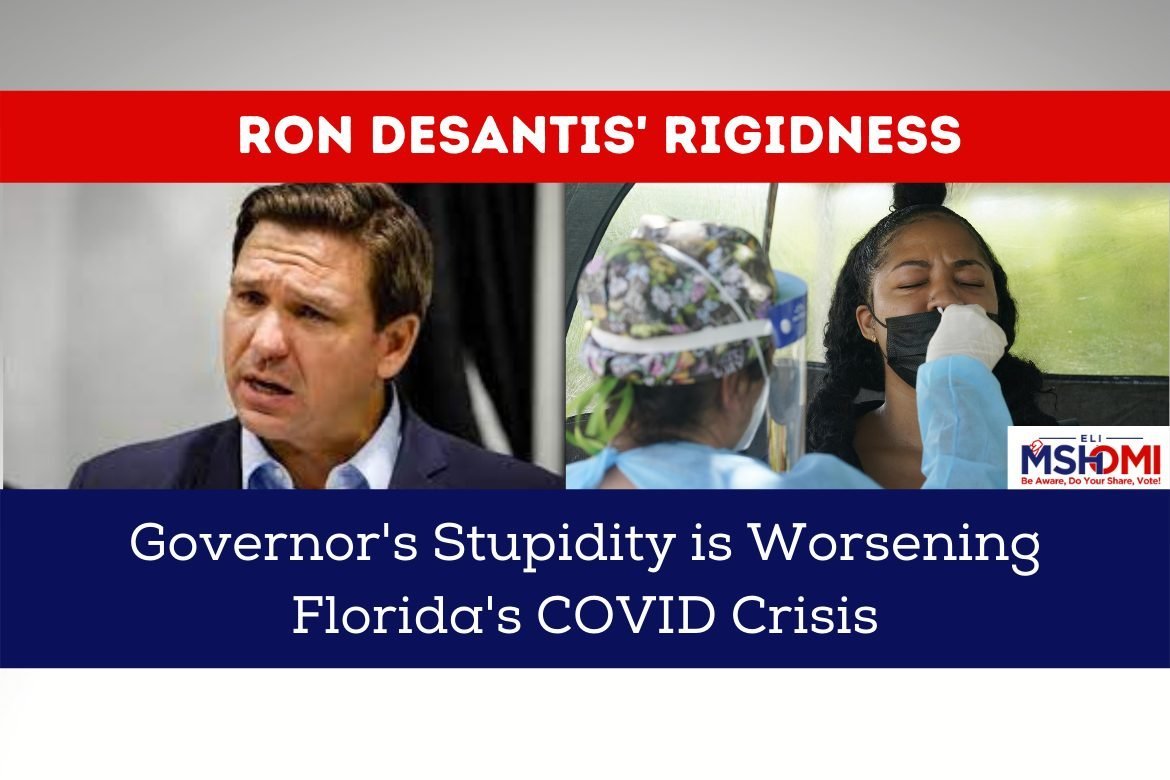 The state of Florida is in the grip of COVID-19, and Governor Ron DeSantis is worsening the crisis. As the state faces a hospitalization crisis, the infection rate continues to increase with every passing day.

This has resulted in the popularity dip of Ron DeSantis as well, as the latest data shows a fourteen percent popularity decline in his approval ratings.

The average death rate in Florida is also higher compared to other states; not a surprise, considering that it is a red state.

At every stage of the pandemic, Florida Governor Ron DeSantis has worked as an accomplice of the virus with his stupidity.

He is allowing businesses and schools to skip the vaccination and masks mandates, saying that the restrictions will harm the economy.

Ron DeSantis: The Man Who is Fostering a Florida Crisis

The vaccination rate in Florida is also far lower when compared to other states. In mid-April, Gov. Ron DeSantis was praised by the media for his exceptional role in controlling the pandemic, which was nearing its end in Florida. But things have changed since then, with Florida becoming the epicenter of the pandemic in the United States.

DeSantis refused to close the state, and schools were opened with COVID-19 surging all across the country.

Polls show that the residents of the state no longer approve of the policy of DeSantis and feel he is responsible for the recent surge in the state. Ron DeSantis’ stupidity is the prime reason behind the increase in COVID-19 cases and deaths in Florida.

Florida has been in the news for a long time, but for negative reasons. During the time of crisis, the governor of the state was not visiting hospitals or brainstorming ways to control the surge. He was rather busy with his 2024 ambitious presidential campaign.

In his efforts to run for the Republican nomination in the 2024 presidential race, Gov. Ron DeSantis is making stupid policies that have no support by empirical evidence and are contributing to the spike of the pandemic that is now driven by the dangerous Delta variant.

To please the business community, DeSantis signed legislation that blocks local governments from imposing COVID-related restrictions, such as a mask mandate or requirement of a vaccination certificate.

Even though it is an established fact that COVID mandates are absolutely legal, the governor’s ignorance is making matters worse.

Businesses no longer need to ensure the vaccination and masks mandates in Florida, thanks to the governor. He even fought to stop cruise ships sailing from Florida ports from mandating masks.

DeSantis has also threatened the local districts with stopping their state funding if they require schools to make the mask mandate compulsory.

With special thanks to the stupidity of the Florida governor, a state that was near the end of the pandemic has once again been gripped by the pandemic, and hospitals have started to fill up with hundreds of new cases arriving every day.

Florida was hit hardest during the recent surge of COVID-19, all courtesy of the governor of the state. Experts say that the factor that most contributed to the surge was the stupidity of the governor in blocking the mask mandate.

At the end of July, the state recorded the greatest number of cases in a single day, 21,638, making one-fifth of the total cases from across the country.

At the start of August, 22 percent of intensive care unit beds were occupied by COVID patients. The spread of the Delta variant increased the infection rate, and hospital beds were being filled up more quickly than one could imagine.

At the beginning of August, more than 10,000 Floridians were hospitalized, which was ten times more than New York. The average death rate was fifty individuals per day, which is alarming as compared to six in New York.

Meanwhile, the governor of Florida was busy allowing businesses to skip mask mandates and writing fundraising letters for his 2024 presidential campaign.

In August, 5,721 Floridians lost their lives which could have been saved if the governor would have been strict with the vaccination requirement and mask mandate.

The death toll shows an average of 184 Floridians losing their lives each day, which is quite horrifying, and for which Governor Ron DeSantis owes an apology to the people of the state.