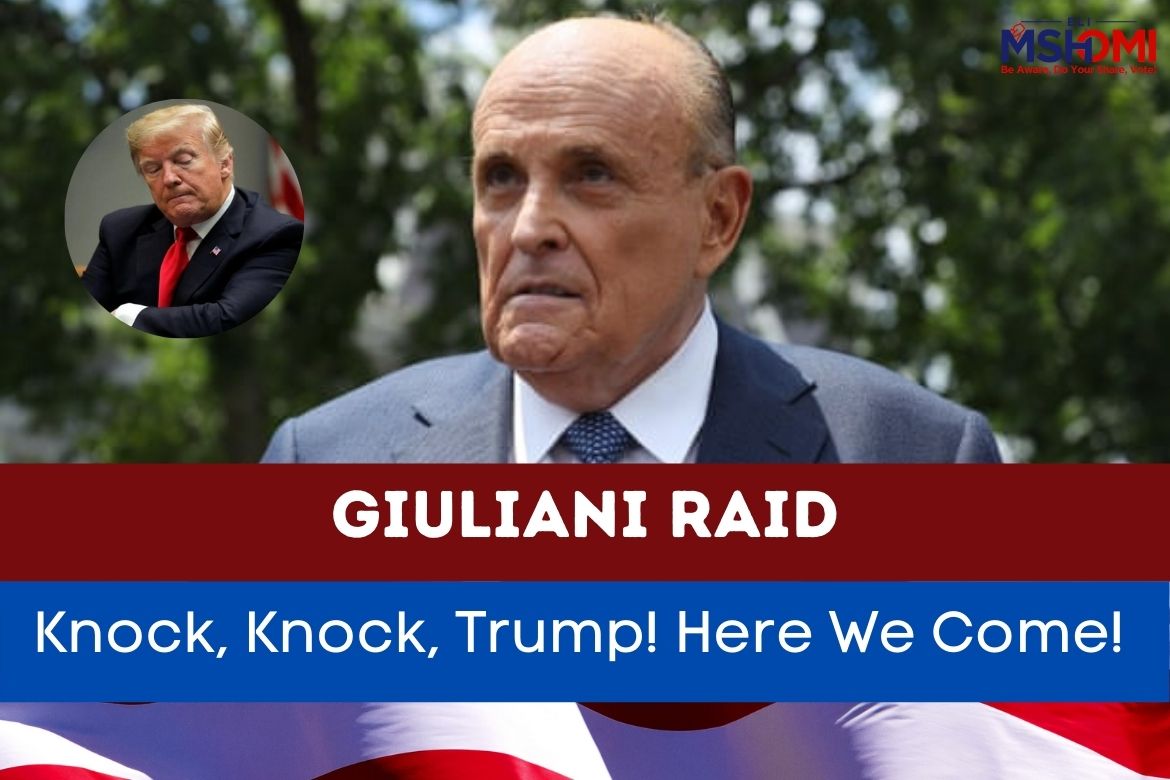 The Federal Bureau of Investigation’s (FBI) raid on Rudy Giuliani has pushed him and his former boss Donald Trump into hot waters, as the FBI is all set to investigate him for Ukraine wrongdoings.

Giuliani became one of the most trusted advisors of the former President and an unbendable defender when the President failed in his efforts to overturn the election results of the 2020 presidential elections.

As he sullied Joe Biden and his son Hunter Biden by helping Donald Trump in 2020, this raid means a lot for the underlying investigations.

As the FBI showed up at his house, electronic devices belonging to Rudy Giuliani have already been taken into custody that can put the final nail in Giuliani’s coffin.

This event marked a significant development in the investigation of Rudy Giuliani and some of the other close associates of former President Donald Trump. They have been at the center of the first impeachment trial of Trump.

Ironically, the same US Attorney’s office in Manhattan investigates this case, which Giuliani once headed.

Giuliani was once considered a top attorney in the United States, with hard-charging prosecution of organized crimes and corrupt politicians.

What does the FBI’s raid mean for Rudy Giuliani and Donald Trump? Let’s see.

With this raid, a close friend of the former President can be turned into a foe, as the unfolding investigations can force him to testify against Donald Trump.

This is not the first time that Trump’s lawyer workplace has been raided. In 2018, Micheal Cohen, Trump’s lawyer, was raided, as a result of which Cohen turned up against Trump and ended up cooperating with the authorities to expose Trump.

This time, Donald Trump has labeled Rudy Giuliani a “great patriot.” It is a matter of time whether or not Donald Trump will end up changing his statements in case Giuliani testifies against him.

If everything goes against Rudy Giuliani, he can also be tried for inciting the January 6 Congressional attack, as he urged the mob to storm the Capitol Hill by saying, “Let’s have trial by combat.” Although the raid appears to be related to his Ukraine dealings yet, as he is a crime partner of Donald Trump, Trump has much to worry about for this raid.

The raid on Rudy Giuliani has alerted the Trump world, as it suggests that investigations on many other allies of former President Donald Trump will also intensify after this raid.

The development in the two-years-old investigation shows that Justice Department is now willing to look into the shadowy dealings of the former President, in which many others of his associates were also involved.

One of the close associates of the former President told CNN on the condition of anonymity that this raid has sent a strong message, and a lot of people from the inner circle of Trump fear that they can be the next target of the FBI.

Michael Cohen has already predicted that Giuliani will eventually turn against Trump, and once this happens, Trump will have nowhere to escape.

As the Federal investigators raided Giuliani’s apartment and office in Manhattan with search warrants for evidence against the former mayor and personal lawyer to former President Donald Trump, Rudy Guiliani’s dealings with Ukraine are ready to be exposed in front of the public.

Before the 2020 presidential election, Giuliani led the effort to dig up dirt on President Joe Biden and Hunter Biden’s dealings with Ukrainian authorities. This event led to the first impeachment of the former President.

Agents have also seized electronic devices of Victoria Toensing and Joseph diGenova, who have been working with Giuliani for a long time as prosecutors.

A day after the federal agents raided the home and office of Rudy Giuliani, the former New York mayor denied his involvement with Ukrainian authorities.

Giuliani also claimed that the raid was unnecessary, as he was utterly cooperating with the federal authorities over the probe against him.

Giuliani’s lawyer, Robert Costello, said that federal prosecutors are reluctant to sit with Giuliani’s legal team and disclose the developments in the probe.

It should be noted that the federal agents rarely disclose the developments with a potential criminal and trust him to provide the required evidence.

According to the New York Times, federal agents are investigating Giuliani’s dealings with the American ambassador to Ukraine, Marie Yovanovitch, and his conversations with Yuriy Lutsenko, the former Prosecutor General of Ukraine.

Ms. Yovanovitch was removed under the advice of Giuliani as he saw her as a potential obstacle in his Ukrainian mission against President Joe Biden and his son Hunter Biden.

Rudy Giuliani is also trying to tap on the fourth amendment. This constitutional amendment gives lawyers, doctors, and priests certain privileges as they hold sensitive information about their clients.

Once Rudy Giuliani claimed that he only has five friends left, and this time one of them, Donald Trump, is the most worried person right now on the face of the earth.

It is only a matter of time that Rudy Giuliani is investigated to spit out the truth against Donald Trump.

If this happens, Democrats will leave no stone unturned against him for politicizing the Ukraine matter.