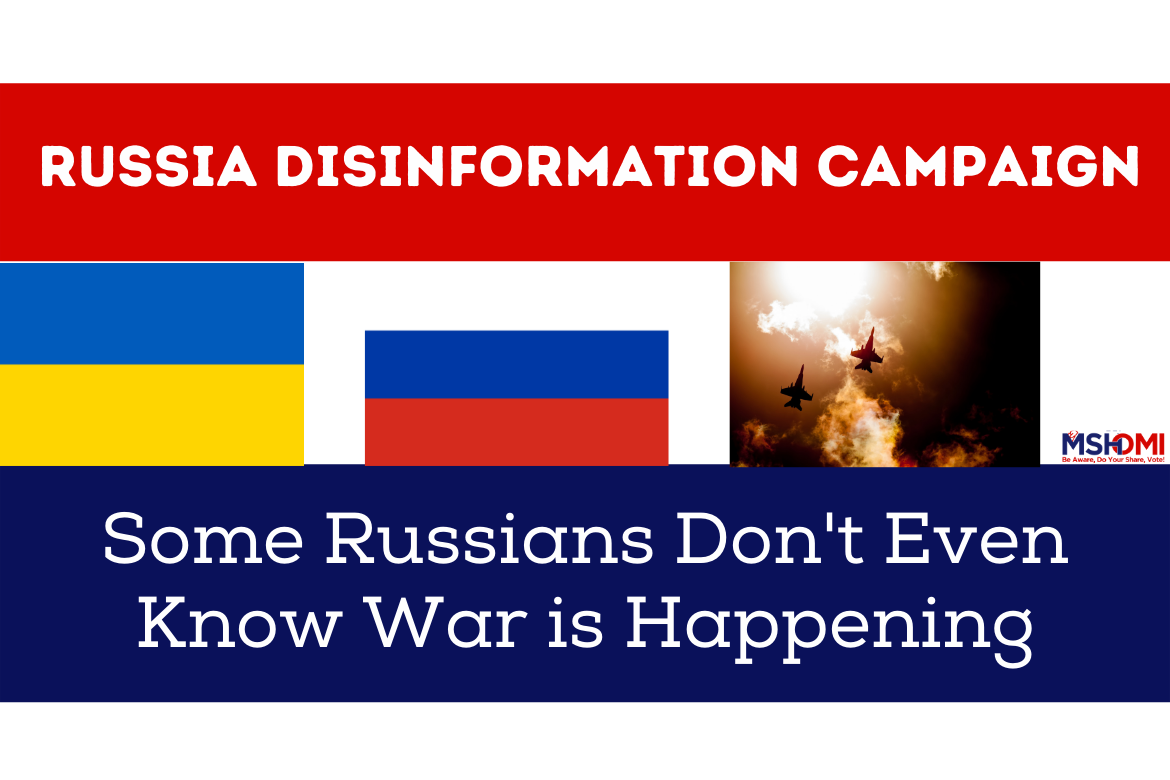 Military conflicts in the age of information warfare can easily look like the war of the dark ages.

At a time when the Russian bombardment of Ukraine has even strangled civilians en masse, a major chunk of the Russian population is unaware of the cruel reality that their president has invaded Ukraine, a war is happening, and that Putin is bombing civilians.

Russia and Ukraine have a long history, and millions of people in Ukraine have their families living in Russia. This is due to the fact that Ukraine was part of Russia until the cold war, so the separation of these states left families dispersed across the borders.

Reportedly many families in Ukraine have told their other family members living in Russia that they are living a misery and that Putin’s aggression has made them clueless.

However, family members living in Russia are in complete disbelief that their dear Putin can go this route. Many of them have even accused their Ukrainian counterparts of lying, as per the Washington Post.

This is How Putin is Controlling Information in Russia

The official narrative of Russia is that it is launching a special military operation in Ukraine in its bid to “de-nazify” the country.

Ukraine’s president has been accused of perpetuating fascism in the country, thus comes Russia which is looking to purify the country.

Media censorship has long been a warring tactic where suppressors try to oppress the narratives and quell the public uprising against themselves. This is what Putin is doing as well.

Recently the Kremlin passed a law that would impose a jail term of as long as 15 years for journalists spreading fake news.”

Likewise, the communist nation also banned Facebook and Twitter in their country, signaling that these social media platforms are being used as a western tool to spread fake news.

This rules out the possibility of Russians getting authentic information during the conflict at a time when the narrative is now completely controlled by Russian state-controlled media.

For an average American, all of this should not look like a completely alienated thing, especially as they themselves faced this sort of control over their information during the tenure of Donald Trump.

While this is ostensibly true that Trump could not have covered up an invasion of this scale from the American public, he continuously flagged scientific information as fake, primarily in COVID times.

By fomenting fake conspiracy theories regarding the origins of the virus, the efficacy of masks and vaccines and undermining the established scientific narrative, he managed to brainwash a significant number of Americans, who ultimately acted as a carrier of the contagious virus and ended up impacting even the cautious ones.

A Bit of Media Transparency Could Have Helped Russians Big Time

The efficacy of free media in times of warlike situations cannot be undermined. It helped more than 13,000 Russians to protest against Putin in their own country, which eventually led them to jail.

Even a bit of more transparent media in Russia could have made a compound effect on the scale of protests in the country, where Putin controls the narrative completely.

State censorship of the media is not a new thing in international politics. In fact, it is present in most second world and third world countries on various scales.

However, the case of Russia is apparently different from other nations. Unlike, for instance, North Korea, where the state control of the media is equally worst, Russia has more importance in international politics.

This is due to the very fact that Russia is a major player in the oil infrastructure of the world, and it is the single biggest nation to control the oil resources of Europe.

Without Russian oil, Europe would be pushed into the dark ages, as no industries would work, and their planes would be grounded, resulting in a crisis of unprecedented nature.

So, Russia has the upper hand in this conflict and in curbing the public narrative by weighing in the pros and cons of the measure.

Amid all of this, when Russian people don’t even know what is happening in the world, the application of economic sanctions against them further violates their rights. Certainly, it seems to be Putin’s world, and everybody else seems to be living in it.

He controls the narrative in Russia, he quells popular uprising, and he is the one who dodges sanctions personally without caring how much these restrictions can impact people of his own country.

US Economic Sanctions: A Tool to Violate Human Rights Globally

Looming Threat of a Nuclear War is Dangerously...

US Economic Sanctions: A Tool to Violate Human...

How Does Social Justice Affect the Development of...

Xenophobia: The Persisting Danger is Getting Worse

Institutional Racism: How to Address it in America