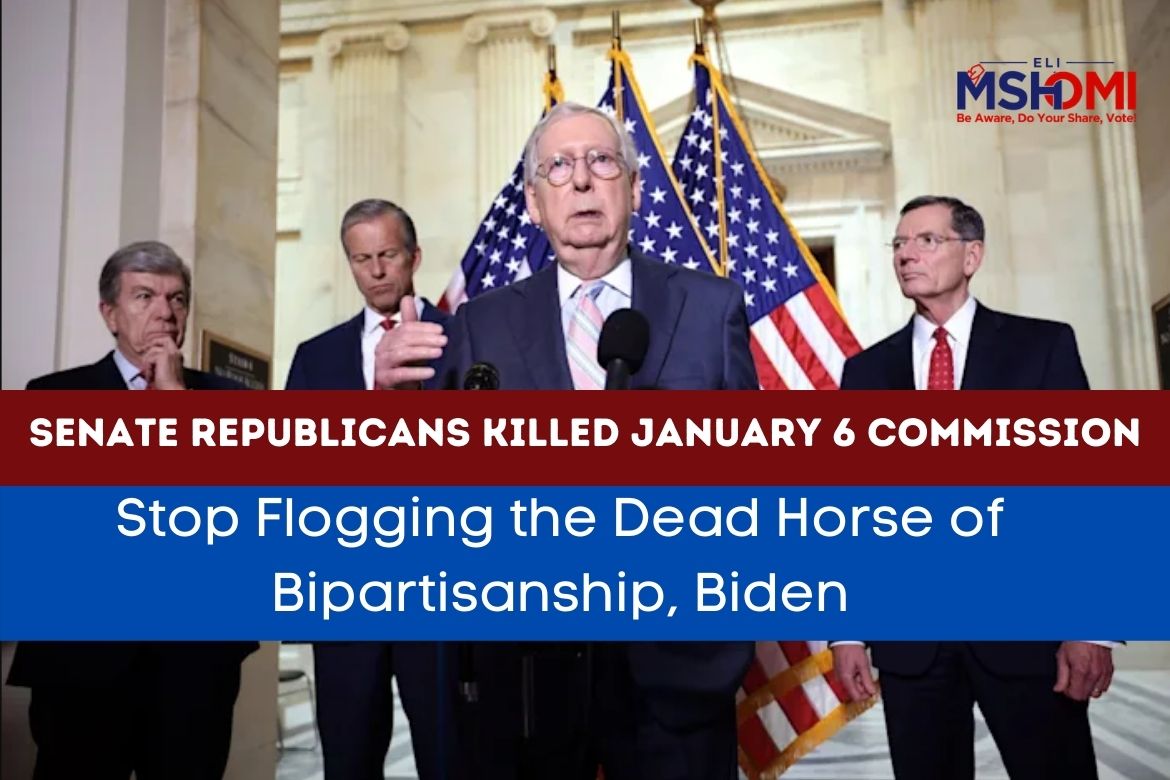 Despite the hue and cry of the mother of the deceased police officer in the January 6 Capitol riots, Senate Republicans have halted efforts, on the request of Senate Minority Leader Mitch McConnell, to create a bipartisan January 6 commission to investigate the Congressional siege earlier this year.

A Republican party, hugely inspired by Trumpism, is still hesitant to take any action that could push the former president into hot water.

While this was an opportunity for Congress to find the genesis of the attacks, Republican’s actions decry the authenticity of the famous proverb that “A guilty conscience needs no accuser.”

When 35 Republicans voted in favor of establishing a January 6 commission previously and passed the bill with a 252-175 majority, a sense of hope prevailed with stakeholders.

As only six GOP senators voted in favor of the January 6 commission, this has portrayed a clear message to Biden that either he wraps the filibuster by working day and night or continues flogging the dead horse of bipartisanship.

This latest ditch from Republicans came in a time when President Biden is begging for Republican unity for his infrastructure bill just for the sake of bipartisanship.

While Biden continues to beg for bipartisanship, he is wasting time on some important legislation that needs to be passed on an immediate basis.

President Biden needs to do simple math as well. Right now, Sen. Joe Manchin and Krystin Sinema are the only two Democrats opposing the ending of the filibuster.

So, going this way would be easy for him as he needs to convince only two people once, and he would be freed from future worries.

On the other hand, if he does not end the filibuster, he would need to convince at least ten Republicans every time a new bill is introduced in Senate.

So, an all-out effort once will be more consequential in the long run instead of resolving the bipartisan dilemma.

Wrapping up the filibuster is the only way with which he can implement the things he promised in his presidential campaigns.

The backlog of the Senate is growing daily, and if the business goes as usual, the likelihood of change is next to impossible.

Republicans will continue blackmailing Democrats on every new legislation by using their only power of the filibuster.

Even despite having the capability of passing the infrastructure bill with reconciliation, Biden is seeking bipartisanship, portraying the sign of poor statesman.

Biden’s Approach is Encouraging Republicans to Exploit Him Further: January 6 commission is just an Example

Now, as Republicans are coming up with their own version of infrastructure bill worth $928 billion compared to Biden’s version of $2.3 trillion, Biden would still be happier to achieve bipartisanship than passing the original text through reconciliation.

Right now, the Biden administration should have two priorities. First, they should neutralize the filibuster as early as possible. Secondly, they should try to prompt their tickets for the 2022 Senate race so that Democrats could grab maximum seats in the Senate next year to block any Republicans’ mischief.

Mr. Biden: Be a President and Not a Cartoon Character

Despite having this staunch opposition, if Biden still believes that he can cut a deal with these Republican senators, he is no wiser than “Tom and Jerry.”

As a president of the United States, Biden should behave maturely instead of being mock material, giving Republicans all the chances to exploit him.

If Biden continues to do so, Biden’s doctrine would be no wiser than Trump’s doctrine because, at the end of the day, no bill is getting passed from the Senate due to his inability to persuade two Democratic senators to end the filibuster.

Once the filibuster is ended, Republicans would be hesitant to revamp it after winning back the majority in the future.

This is because once the revolutionary steps are taken, they are hard to roll back due to the popular pressure, which is evident from the fact that Republicans failed to roll back Obamacare and DACA and Dreamer despite having a staunch opposition within their own party against those plans.

Dealing with the devils requires an alternate strategy from Democrats compared to what they are pursuing right now.

Despite having an equal say in this January 6 commission, this attempt to block the bipartisanship is a sort of admission of guilt by Republicans who cannot put their de facto boss in hot water.

It is pertinent to note here that the January 6 commission was just like the 9/11 commission, and was supposed to be a bipartisan one with five members from both parties.

Many of them know that if they do so, a single statement from Trump can alienate too many voters away from them in the upcoming 2022 elections.

So, Republicans are playing safe to survive in their voters’ eyes who could make them pay in case of inquiry against Trump.

The January 6 commission was undoubtedly the need of the country in these circumstances to bring the responsible people to justice.

President Biden also needs to pursue the creation of a commission even after its killing by Senate Republicans.

The attorney general of the United States has the power to do so, which would have the same authorities as this commission would have.

It will recommend its findings for which federal prosecutors can take action later on.

But perhaps, seeking Republican unity, Biden may end up compromising on this, or else his Republican “friends” would be offended.