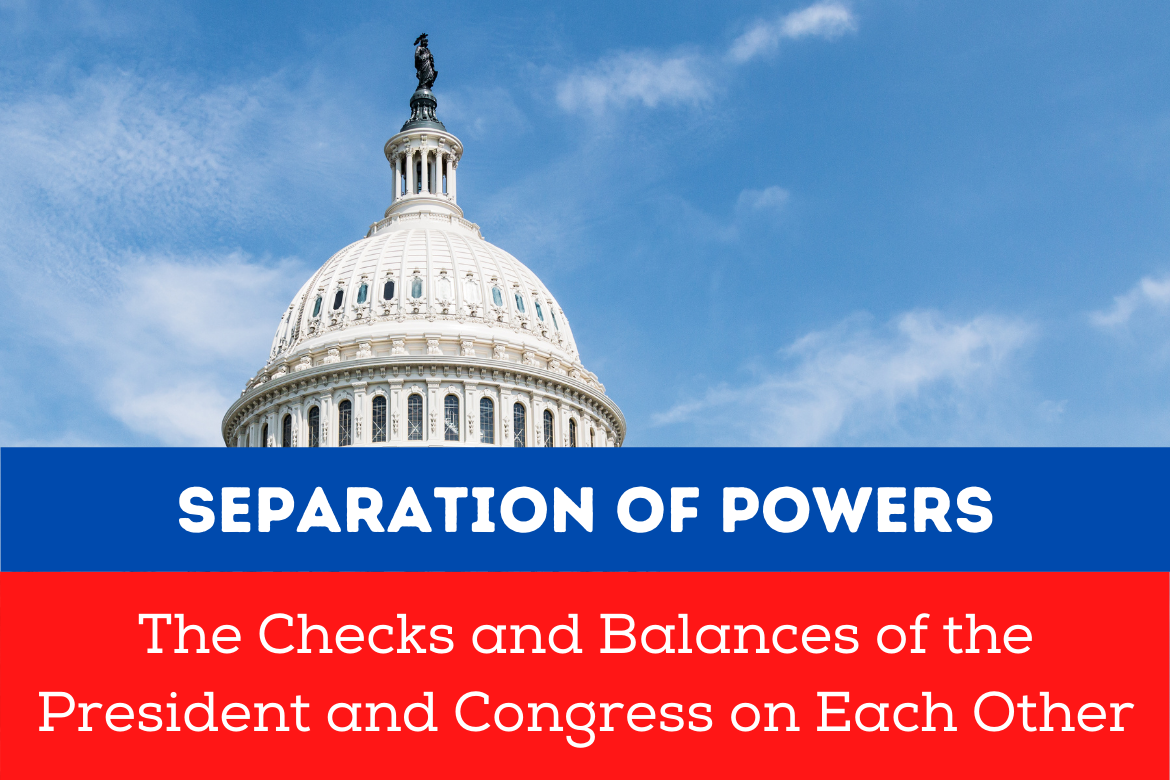 The Constitution of the US makes sure that no branch of the government gets absolute power. The framers of the Constitution tried to establish an efficient method of separation of powers and checks and balances to avoid the abuse of power from the president, Congress, or the judiciary.

While some people may think that due to the executive powers in hand, the president has the ultimate authority in the country, this is not true at all. The checks and balances system in the US constitutional laws make sure that every pillar of the government is separate and independent yet have a close eye on the other branches.

This is the reason why the president has to align them with his side to run the country’s affairs smoothly. How does Congress exercise its legislative powers to keep a check on the president? The answers to this question can be found below.

The separation of powers gives the authority of legislation to Congress. Congress can make laws related to every matter, including taxing and spending. To make sure that Congress does not abuse its power of legislation, the president has been given the authority to veto the laws they pass. The president can exercise this presidential veto against any law that he thinks is ineffective or not aligned to his agenda.

Presidential vetoes can be of two types, mentioned below.

Franklin D. Roosevelt exercised this power the most, as he vetoed 372 bills in total. While on the other extreme, Thomas Jefferson never vetoed any bill in his two terms.

Congress also has a series of checks on the executive branch.

Congress has the authority to override a regular presidential veto with a two-thirds majority vote. So, presidents have to settle their terms with Congress or he is at risk of losing his authority.

Senate’s Check on Military and Treaties:

Although the president is the Commander in Chief of the US military, he has no authority to give them funding.

According to the Constitution, Congress approves the funds for the military and declares war on any other country. The Upper Chamber of Congress, i.e., the Senate, has the authority to ratify peace treaties. The Senate can reject any treaty which is presented by the president.

One of the famous examples in this regard is the rejection of the Treaty of Versailles, back in 1919, in the aftermath of World War I.

As President Wilson failed to take care of the Senators’ objections, the Senate refused to approve the treaty.

Congress – The Purse of the USA:

Congress is also known as the purse of the USA because it has control over the spending of the president under the clause of the separation of powers. The president cannot commit funds to any department of the country without the approval of Congress.

The Senate has the power to accept or reject the federal officials nominated by the president. This is also one of the important controls so that the president does not appoint only the people of his own choice everywhere in the government.

Impeachment of the President by Congress:

Congress can impeach the president from office in case of any irregularity found in the actions of the executive branch.

While the House of Representatives impeaches the president, the Senate is empowered to remove him from office. For instance, the second impeachment of Trump is a classic example in this regard. Until now, three presidents, Andrew Johnson, Bill Clinton, and Donald Trump, have been impeached, but none of them was removed from office.

The efficient working of all the branches of the United States is necessary in order to run the affairs of the country. While the separation of powers gives an even playing field to all three branches of the government, these checks help negate the accumulation of power in one hand. However, they can also be the reason for the red tape and ineffective decisions.

The prime example in this regard is the US government shutdown in early 2019, which lasted for thirty-four days, the longest in history.

Similarly, both of these branches of government also exercise their checks on the Supreme Court of the United States, as well as the other courts of the country.

Without these checks and balances, the concept of democracy would die. Only the proper use of these powers can help the country to progress.