Tanzania President: Mastering the Art of Lies and Deceptions 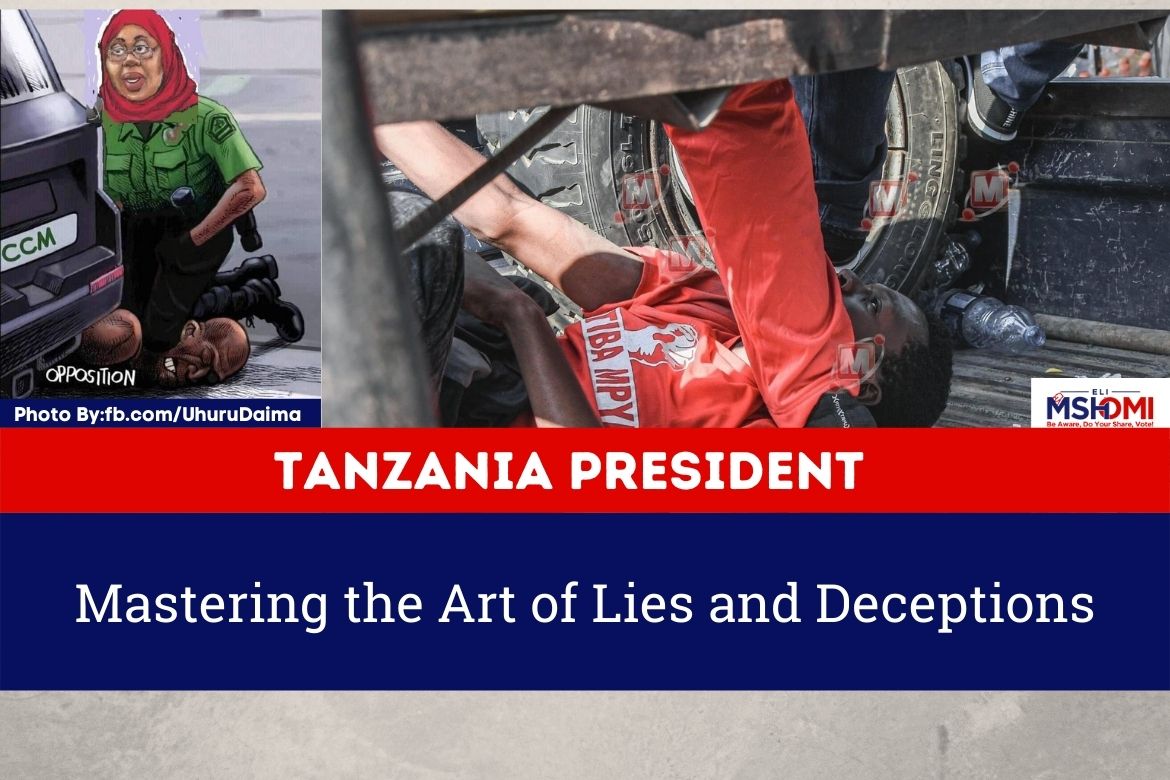 After cementing her regressive agenda at home, Tanzania President Samia Suluhu has started fostering her hypocrisy at the international level as well.

As she appeared in a BBC interview, her lies to eyewash the critics are a telling example of how far she will go to defend her unconstitutional and merciless rule.

As the BBC channel is regarded as one of the most popular in the world, this is surely an effort to mend her reputation in global politics in an attempt to win the support of international organizations as well.

The constitution of Tanzania proclaims that the United Republic is a democratic, secular, and socialist state which adheres to multiparty democracy.

However, by strangling the opposing political parties, Samia Suluhu is killing the already useless constitution.

How did she portray her administration’s hypocrisy, and why does the world need to tackle this propaganda before it is too late? Let’s see.

Deusdedith Soka was humiliated in George Floyd Style on 13.08.2021 for wearing a T-Shirt “Katiba Mpya,” meaning “New Constitution” which is opposition demand from Tanzania Repressive regime . He is still in custody – Photo Credit – Watu Huru FB

The president alleged that once elections are over, the role of opposition parties becomes limited to holding boardroom meetings to deliberate their party affairs only.

The president used the USA as an example of a democracy where the losing party does not hold public rallies beyond an election cycle.

The president’s statements are an attempt to interfere with the freedoms and rights of the opposition parties, which were already struggling.

Her claims regarding the USA are also misleading to the core. Ironically, former President Trump continues to hold campaign rallies, raise funds, and lobby with stakeholders after leaving the White House, and none of this activity is unconstitutional.

Lie # 2: Tanzanian Opposition Leader is Not Being Prosecuted on Political Grounds

Suluhu claimed that Freeman Mbowe was not arrested on political grounds. She also claimed that the case against the opposition leader was started in September last year.

Both of these claims are absolutely groundless. Just like her predecessor, Samia Suluhu’s government is also trying to suppress the opposition political parties. This action against Mbowe was the start of her efforts.

There were no charges leveled against Mbowe and his co-accused on terrorism and money laundering in September 2020.

The first time such charges were brought up was on July 26, 2021, and mentioned again on August 5, 2021. The president has intentionally misled the entire world by spreading propaganda against the opposition member.

Also, contrary to the president’s allegations, the charges for the three co-accused were filed in August 2020 and not September 2020.

On September 25, 2020, there were charges that were leveled against three other individuals. Those charges were all dropped on July 27, 2021, and, contrary to what the president stated, none of the accused were convicted.

The president is intentionally misleading Tanzanians.

This is one of the most common characteristics of the tyrants; they try to feed lies to their public t to win their support.

Lie # 3: She Suluhu is Open to Opposition

Samia Suluhu claimed in her BBC interview that she is capable enough to sustain the opposition of different factions of the society on social media.

According to her, she doesn’t ban social media to ensure that people won’t have any platform to criticize her.

The country’s legislature, which provides the most powerful platform of opposition, is being betrayed by the president.

Putting the opposition leader behind bars is equivalent to banning the highly regarded platform of opposition, which directly contradicts Suluhu’s claims that she is open to the free speech of the opposing voices.

Lie # 4: Samia Wants to Introduce a New Constitution in the Country

President Samia Suluhu asserted that she would work with the opposition to introduce the new constitution at the “right time.”

The statement itself is a deceiving one, with hypocrisy and lies embedded in it.

If she had any plan to work on the new constitution, the prosecution of Freeman Mbowe would have never happened.

This portrays that the statement is only an eyewash for the other countries, as Tanzania is concerned with face-saving itself from international humiliation.

Now is the right time for Suluhu to introduce a new constitution. She is facing the dilemma of “Now or Never,” as the space for the alternate narratives in the political regimes shrinks with every passing day.

She believes that the country allows and cultivates a free environment to practice journalism within the country.

Samia Suluhu is hesitant to give people free access to media in any format.

The regressive laws that were introduced in the Magufuli era are still prevalent in Suluhu’s Tanzania, as she has not taken any concrete measures to overturn media curbs.

Lie # 6: Samia Tricking People on the Dates of Mbowe’s Case

Until Mbowe’s recent arrest, the opposition was being told that the matter was still under investigation.

The public has been advised that the investigation was completed on July 26, 2021, which was the day that Mbowe was arrested.

In August 2020, the state brought up charges against the chairman of CHADEMA, Freeman Mbowe.

As of August 5, 2021, the Deputy Public Prosecutor (DPP) continued to report that the DPP’s office was working on forwarding a report of their findings to the High Court, as the Kisutu Resident Magistrate’s Court in Dar es Salaam has no jurisdiction over this matter.

Ironically, the president referred to this case as finalized and the accused convicted. Therefore, it would not be an exaggeration to conclude that the president appears to be interfering with the independence of the judiciary and is acting as both judge and jury.

Lie # 7: Samia’s Reason for Not Meeting With the Opposition

The president alleged that she had not met with the opposition because the concerned parties had not yet identified representatives.

Hon. Mbowe wrote to Suluhu and sought an audience with her, even before she addressed Parliament for the first time as president.

On April 04, 2021, CHDEMA received an emissary through an aide to the president, acknowledging that she had received Hon. Mbowe’s letter, and would arrange to meet with the opposition in due season.

Samia Suluhu told all of these lies to the western media to put a blanket to cover over her hypocrisy and oppression. By telling this baseless story, she wants to portray that she is the protector of Tanzanians, fully concerned for their welfare, and an advocate of their human rights.

However, this is absolutely not the case. The Biden administration must not be blinded by these fraudulent claims and should pressurize the imminent tyrant to course-correct her actions or expect the consequences of severe sanctions.

Otherwise, Suluhu will continue to find vulnerable areas to deceive the global administrations and would continue using the instruments of mass communication as a tool to foster her lies.

Fall of Kabul: US Gains of Twenty Years Overturned in One Month, Courtesy of Taliban Insurgency