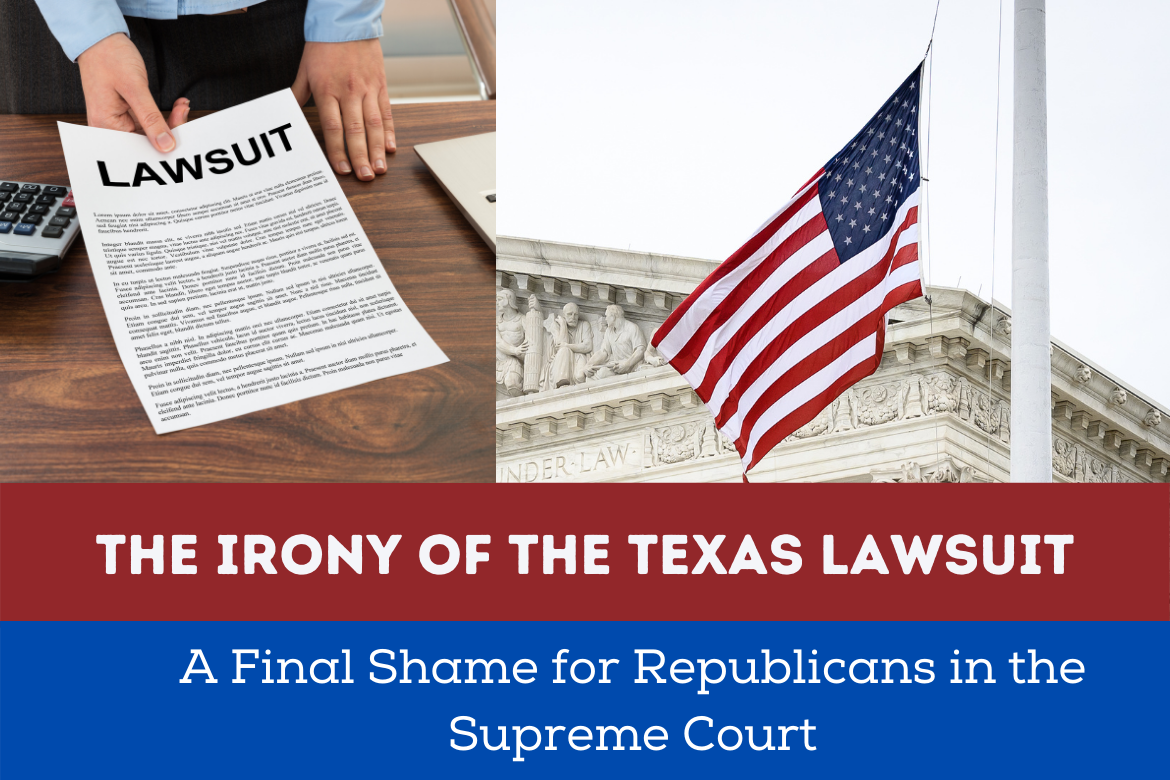 Amid all the failures and setbacks, Republicans tried to steal the American mandate one last time by filing a Texas lawsuit in the Supreme Court.

The Texas Attorney General Ken Paxton, in his bid to make Trump happy, filed a lawsuit and demanded that the Supreme Court invalidate the results of four states, including Pennsylvania, Wisconsin, Georgia, and Michigan.

However, despite having a conservative majority in the Supreme Court, the court threw out the lawsuit by a sheer majority. Even Trump-appointed Justice Amy Coney Barrett, a high hope for Republicans, ruled against the lawsuit.

Although this lawsuit was a part of the three dozen lawsuits filed by the Trump campaign in the aftermath of the November elections, it was different from the other ones in many aspects.

Evidence suggests that the Texas Attorney General wanted to come in the eyes of Donald Trump just to get a presidential pardon. He is expected to face severe charges of security fraud, which can put him in jail.

As this was the last major attempt by the Republicans to overturn the elections before the safe harbor, they decided to come in with full force.

Hundreds of Republican congressional representatives and more than a dozen Attorney Generals supported this lawsuit.

Many Republicans stayed on the bandwagon to remain in the good books of Donald Trump, who is expected to have a strong influence over the Republican party in times to come.

Most of the signatures come from the deep red states and the far-right conservative wing of the Republican Party.

The lawsuit also made evident that roughly one-quarter of the United States Congress believes that the Supreme Court should invalidate Joe Biden‘s victory. However, as per the predictions of the political pundits, this lawsuit is also history now. The major aim of the Texas lawsuit was to nullify more than ten million American votes in Michigan, Georgia, Pennsylvania, and Wisconsin. The lawsuit demanded that the Supreme Court invalidate the 62 Electoral College votes in the states mentioned above.

The distinctive news about this lawsuit was that it was directly filed with the Supreme Court. The Texas government was of the view that the changes to the election rules amid the pandemic in these states were illegal and that the results should be discarded in these states.

According to Paxton, the changes made in the electoral procedure due to the pandemic were illegal, and so these states should be stopped from participation in the Electoral College.

Two days after Paxton filed the case, seventeen states filed a motion in support of the lawsuit, and six of these asked to join the lawsuit themselves. This is being termed as the one last shot for the Republican Party to get Trump another four-year term. Who Tried to Come in the Good Books of Trump?

The Texas lawsuit had the biggest support from Congress, as 106 Congressional Republicans signed an amicus brief in support of the lawsuit. The brief voiced the concerns of the Republican members of Congress that there have been large-scale constitutional irregularities in the presidential election.

For instance, consider the following elements that supported the lawsuit.

President Trump has also asked the Supreme Court to allow him to become the plaintiff of the lawsuit. Trump asked Senator Ted Cruz to personally argue the case in front of the court if the court allows him to do. The Supreme Court of the United States made a correct call by rejecting the lawsuit altogether. Otherwise, it was going to create an era of political instability where states would intervene in the elections conducted by the other states. This was one of the main reasons why the accused state officials also came to the front to defend their states.

Consider the following statement by the officials of Pennsylvania, for example.

“Let us be clear…Texas invites this court to overthrow the votes of the American people and choose the next President of the United States. That Faustian invitation must be firmly rejected.”

The Texas lawsuit is the most significant effort by the Republican party to overturn the election results, yet many Republicans have also shown their disagreement with the lawsuit. Who opposed Trump’s bid in the Texas lawsuit? Let’s look.

Rep. Chip Roy, one of the ideological supporters of Trump, opposed the Texas lawsuit in the following words.

“A dangerous violation of federalism and sets a precedent to have one state asking federal court to police the voting system of other states.”

“Every American who cares about the rule of law should take comfort that the Supreme Court – including all three of President Trump’s picks – closed the book on the nonsense.”

Why Republicans Followed Trump Blindly in the Texas Lawsuit

In the aftermath of the 2020 presidential elections, Donald Trump took some decisions that put many Republicans in a confusing position. While on the one hand, they wanted to support the century-old electoral system of the United States, on the other hand, they had to prove their allegiance to Donald Trump.

So, many Republicans wanted to prefer Trump over democracy.

However, the very inception of this Texas lawsuit raises some serious questions. Why did Ken Paxton raise this lawsuit in the first place?

The answer is simple; he wants a presidential pardon, so he wanted to be in the good books of Donald Trump just before the end of his presidency. Paxton was accused of security fraud charges in 2015. However, he is yet to be proven guilty. If Trump grants him a preemptive presidential pardon, his only aim will be completed, and he will not be charged with any federal crime in the future.

The Republican party started to follow Donald Trump in his baseless lawsuits right after the elections. This culture of the blind following shows how powerful Donald Trump is and how Republicans praise him as a God.

The Republican party started to complain about the election results once it became apparent that Joe Biden had won the election. The president and his team have been spreading fake information and conspiracy theories of voter fraud along with filing lawsuits to make the election controversial.

The president and many Republicans were calling the lawsuit as the long shot and big win; they gave it everything they had. Trump’s allies urged other members of the party to become involved in it to maximize the pressure on the court.

President Trump has played the last card in his deck, and now Joe Biden is all set to win the electoral college officially.

Despite getting such strong backing by the Republicans, the failure of the Texas lawsuit decries the transparency of the elections.

The perception of Donald Trump about the judges also proved to be wrong, as he believed that the judges appointed by him would favor him in all the cases. However, the unilateral decision by all of the judges suggests that the justices give decisions based on the facts and law and not on the conspiracy theories.