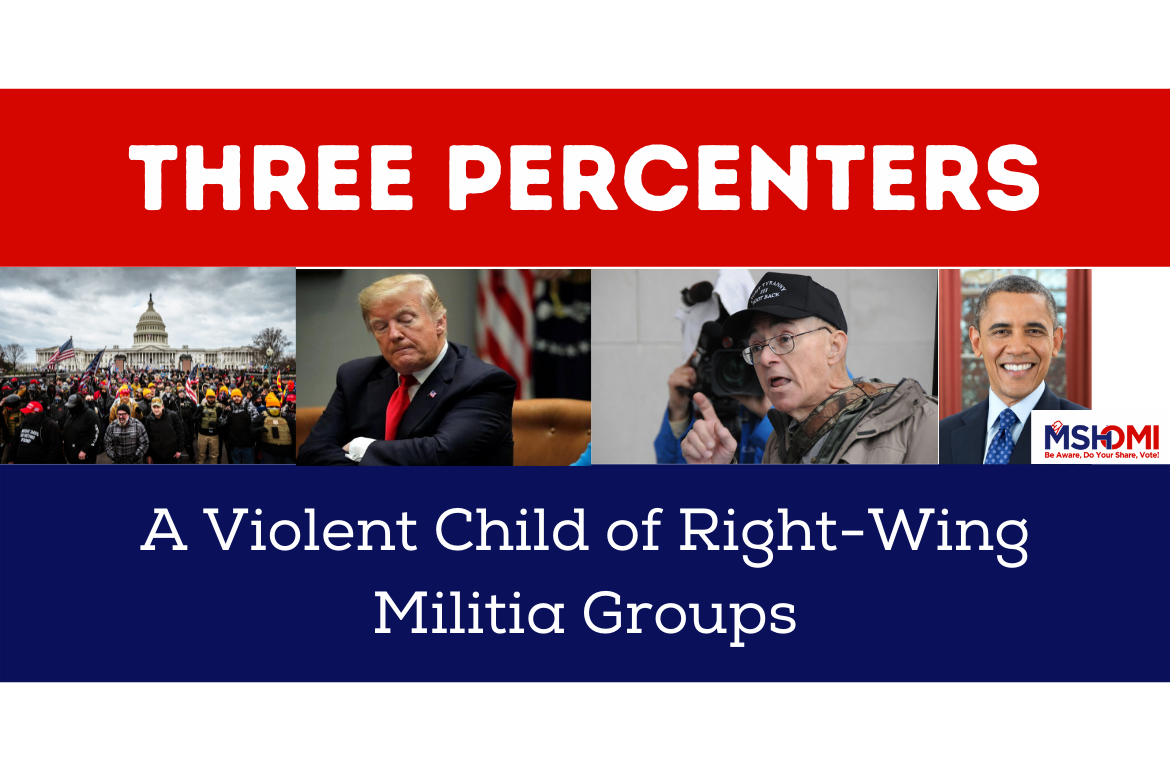 Far-right militia groups have often resorted to violence to denounce the constitution of the country. While Proud Boys and Oath Keepers have often been in the spotlight for perpetuating violence in the country, the role of Three Percenters goes ignored.

Commonly denoted as  3 Percenters, 3%ers, and III%ers, this group was at the forefront of attacking the US Capitol Hill on January 6.

By advocating the so-called gun rights and posing resistance to the US government, Three Percenters try to pressure the government using their demonstrations.

Right-Wing Resorting to Violence: Three Percenters is Just Another Such Entity

At least six members of Three Percenters were arrested and charged in the Capitol Hill riots. Prosecutors in the case believe that the members of Oath Keepers planned the conspiracy through secret messages sent to the Proud Boys and Three Percenters.

The year 2008 was historical in nature for the United States when the first-ever Black president, Barack Obama, was elected to the White House. However, in parallel to that, a far-right militia group, the Three Percenters, was also born, primarily under the threat that Obama would introduce stricter gun laws in the country.

Likewise, the group also evinced that the president would introduce governmental outreach, a phenomenon that is often attached with left-wing governments. Thus, to defend the so-called liberty of the masses, the Three Percenters group decided to take the reins into their hands.

The interesting fact is that just like Oath Keepers, most of the members of this group are also trained police and military members who decided to use their training for purposes other than defined in their oath.

Both Oath Keepers and Three Percenters often go hand in hand, as the group itself was created by an Oath Keepers’ member named Mike Brian Vanderboegh in 2008. Thus both groups remain in touch in perpetuating violence, the classic example of which was the January 6 incident.

With a history of being attached to right-wing groups, Mike’s allegiance to Three Percenters is no surprise at all.

Just like other right-wing militia groups, Three Percenters claims not to discriminate against people based on color, but it is just a fancy slogan to attract people.

In reality, their practices are far from this slogan. When the Black Lives Matter racial protests erupted in the aftermath of the Michael Brown shooting in Missouri in 2014, the Facebook page of the Three Percenters group featured radical racial comments against the movement, depicting its inherent hate against Blacks.

Thus the group is based on white supremacist ideology that is itself motivated by Nazi practices.

The group was so widespread in the United States that many local chapters of Three Percenters started emerging all over America.

After the Capitol Hill riots, some of these chapters started dissolving themselves as the group came into the limelight.

However, this was perceived as an admission of guilt by the groups which tried to denounce the identity after perpetuating violence. Thus, the federal authorities arrested a score of their personnel who tried to hijack the legislature on the vote confirmation day.

Now, when Canada has labeled this group as a terrorist entity and the group is shattered in America, it is time for both of these countries combined to launch an all-out assault against this group to bring peace in both nations.