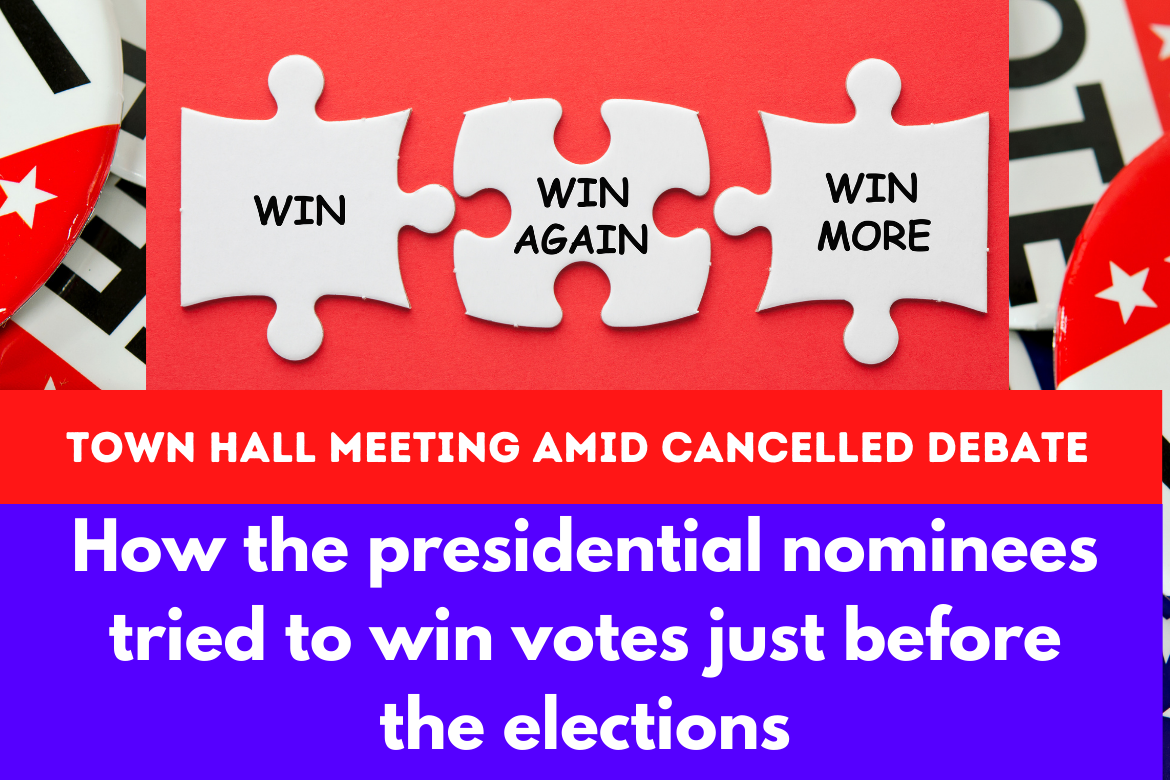 Amid the fears of the rising coronavirus cases in the United States and the infected president in the Oval Office, the CPD decided to cancel the second presidential debate.

However, little did they know that both candidates would be promoting their respective campaigns in different town halls the same night. A COVID infected, mask-less Trump appeared in a town hall meeting, ignorant about the pandemic despite catching the coronavirus.

The candidates, separated by a distance of almost 1200 miles, expressed contradictory opinions about the matters of public interest in town halls meetings. As always, Trump was aggressive in his responses, with incremental fights with the host while refusing to condemn the QAnon conspiracy groups.

Once again, the meetings were focused on counting the negatives of the other candidate instead of focusing on one’s own achievements.

Still, some interesting things happened as Biden mistakenly gave credit for the foreign policy achievements to Trump, about which he mostly remained critical in the past. Not only this but for the first time in recent memory, Joe Biden talked about expanding the size of the Supreme Court. The Pandemic: Trump’s denial of the facts once again:

While both of the candidates were answering the questions in their respective town halls, coronavirus became the topic of core interest once again. As always, Trump was too ignorant of the COVID-19 pandemic that has shattered the global economic and social infrastructure.

With more Americans getting infected and dying in recent days, Trump opined that we are “turning the corner” on the virus and that the vaccine will be available in a matter of time.

However, Trump’s opinion was against reality, as experts believe that we will have to wait until 2022 to get a workable vaccine for the virus. As a matter of fact, the rules of the first debate required presidential nominees to get a coronavirus test before the debate.

Also, Trump shocked the nation when he was asked whether he got tested for the virus or not. “Possibly I did, possibly I didn’t,” said Trump. He further added that “Vaccines are coming, and our economy is strong.”

On the other hand, Biden once again blamed the GOP government for the failures regarding the pervasive pandemic. Biden took the approach of getting the sympathy of the voters who are badly affected by the pandemic in one way or another. He said, “He (Trump) missed enormous opportunities and kept saying things that weren’t true.”

Beating around the bush is not a new thing for the Republican-based president. He has a significant record of providing extremely vague answers to the questions. In the town halls meetings, the same things were observed again

Once again, he was seen jumping the questions in the town hall event in Miami. From the conspiracy theories of QAnon to the historical court ruling of Roe vs. Wade to his stance on wearing masks during the pandemic, he tried to keep the voters in ignorance regarding his opinions on various matters. Maybe he knows that giving clear answers can turn away a large number of voters from his campaign as he mostly believes in the extreme views. So, he tried to play safe to win the attention of the voters.

Town halls meetings were expected to revolve around the core issues like the economy and the topic of human rights was expected to be ignored once again.

However, Biden emphasized this issue last night and said that once in office, he will revoke the laws introduced by the Trump administration regarding discriminatory behavior against transgender people.

The response to Biden regarding this issue received applause across the country, as a human rights activist Dana Goldberg tweeted later, “Joe Biden just said too many transgender women of color had been murdered. This is something you will NEVER hear from Donald Trump. EVER. “

With this stance, Biden has also won the support of the different human rights groups and non-governmental organizations that mostly support the candidate based on their views regarding the depressed faction of the society.

This can greatly help Biden, who is already leading the national polls by nearly 16 percentage points in the November 3 elections.

Climate change: A never-ending debate in the town halls meeting:

Trump always claimed that the Biden administration would ban fracking, resulting in severe consequences for the economy of the United States.

Joe Biden took a clear approach this time compared to the previous times and said he doesn’t want to ban fracking. He further said that we would just “stop giving tax breaks and subsidizing oil.”

Biden’s talk on the expansion of Supreme Court:

The town hall debate of Biden became interesting as, for the first time, he expressed his opinion about the expansion of the Supreme Court. While he did not explain it explicitly, Biden said that he would do this before the election day.

However, he ruled out the possibility that he is against the expansion and said, “I’m open to considering what happens from that point on (after too many conservative justices on the bench).” He also gave a hint that between four and eight Republican senators will back his agenda if he gets elected to the White House. Probably he knew that if he doesn’t address the issue now, people can start doubting his intentions for jumping this question again and again.

With the elections coming in less than seventeen days, presidential nominees are not missing the opportunity to get the attention of the undecided voters, with the swing states changing rapidly.

Trump’s ignorance of the critical issues of the United States has already cost him too much, as he is lagging far behind Biden in the polls. However, Biden is not missing any opportunity to win the sympathies of the most vulnerable factions of society as he addressed the issue of transgender people in the town hall meeting.

It seems that Trump’s own blunders are tilting this election in favor of Joe Biden. Political pundits believe thaT Trump already knows that he will lose the November election so he will open a new Pandora’s box of election rigging to refuse the peaceful transition of power.