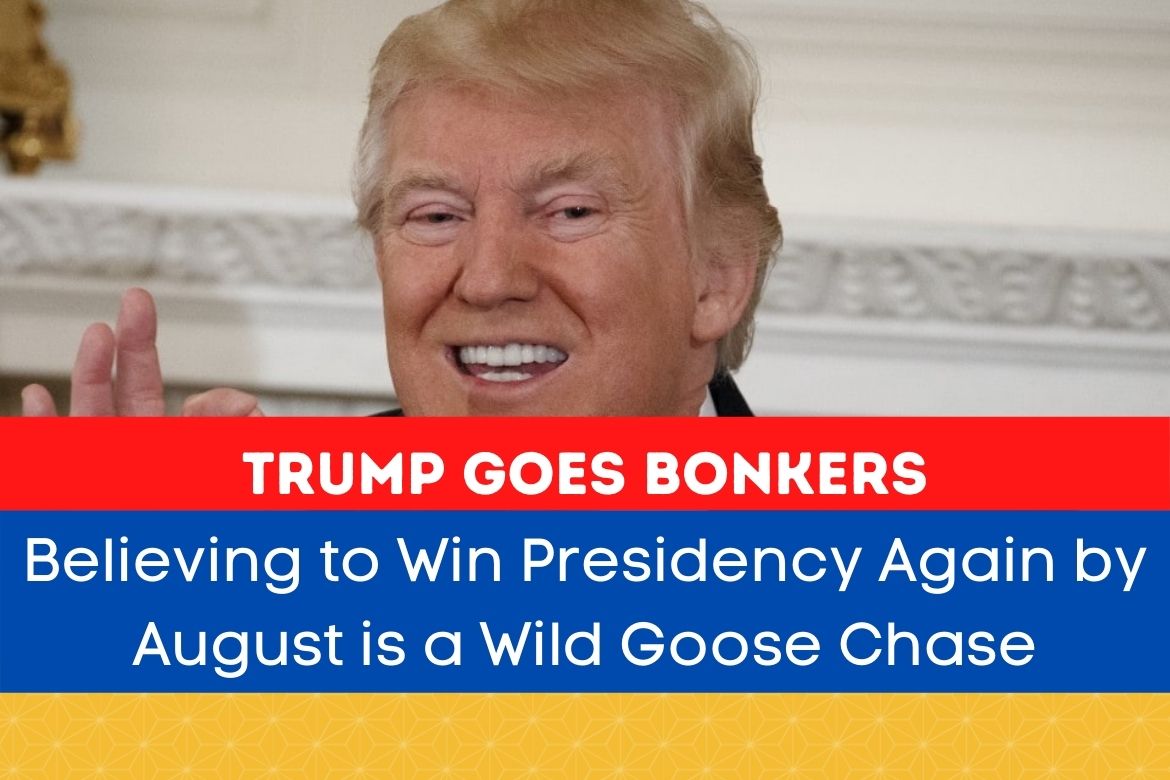 Trump is back with his conspiracy theories once again. Six months down the line of his conclusive defeat in the 2020 presidential election, Trump conspiracy theories are now claiming that he will be back in the White House in August after the completion of the election audit.

Qanon, a conspiracy group, claimed some time ago that Trump would be installed as a President on March 4, a claim which was buried with the passing of the date.

However, this time, Trump himself is perpetuating the nonsense, which can not only inspire his hardcore supporters to believe these claims but could also spark an insurgency after the demise of these claims.

How is Trump feeding lies into the minds of many people just to retain relevancy in American politics? Let’s see. Trump Goes Mad: Claiming to Regain Power is Building Castles in the Air

According to Maggie Haberman, The New York Times correspondent, Trump is misleading people he is in contact with that he would be “reinstated” as  President by August.

These types of baseless Trump conspiracy theories sponsored by the former president are also responsible for the widespread political unrest in the country.

Many QAnon supporters have been seen recently endorsing the idea of the Myanmar-style coup in the United States.

The situation worsened as Michael Flynn, the former National Security Advisor, also appreciated the idea of the Myanmar-style coup recorded in a video in a protest attended by a score of Qanon believers.

It is pertinent to note here that Michael Flynn was the right-hand man of the former president Donald Trump in the pre-election era, who also advised Trump for the military coup in the US before receding the power.

These verbal attacks on democracy, coupled with Trump’s baseless election theories, are feeding lies in the minds of Republican supporters who can even imagine staging another attack like the January 6 Capitol riots. Despite having two complete recounts, Arizona is currently having another election audit by a GOP-led firm.

When the firm started work, it was widely anticipated that it would bring some controversy, which is precisely the case.

This pro-GOP firm has started mentioning irregularities in the Arizona elections.

Many stakeholders believe that this recount is just another effort to sabotage the democratic practices in the United States and to cast a dark shadow on the electoral process.

With these allegations, Trump would have a reason to mobilize the Republican voters in his favor for the nationwide campaign.

It is also pertinent to note here that Trump’s statements are signaling toward broader planning. He is closely following all the developments in the different states to devise a rebellious strategy against Democrats in the near future.

Whatever outcomes they derive from the ongoing audit, the Republican-led Arizona senate has successfully facilitated the former president to promote Trump conspiracy theories.

Republicans activists are even more hungry to reinstate Trump back in the White House by hook or by crook.

They are pushing the relevant authorities for a full-scale audit in the different states, including Georgia, New Hampshire, California, and Michigan.

The controversial Arizona audit is also inspiring other states to initiate a new wave of election investigations.

For instance, the Republican speaker of the Wisconsin House of Representatives has hired former police officers to investigate the 2020 elections. But, unfortunately, one of these officers has already supported Donald Trump’s election fraud claims.

So the ambitions of the GOP are evident here. Recruit pro-Trump investigators to raise fingers on elections so that Trump can use these investigations for cooking his conspiracy theories.

Republicans are busy writing a plot to bring Trump back in power. Now, when they have fallen short of legal ways, playing foul is the only way for them, which they are doing in full flow.

Whether it is a military coup, using staged protests to demand Trump’s comeback, or hiring election audit firms after more than six months since the elections, everything is driven by a Trumpist mindset.

The pro-Trump majority in the US Senate is making the matter worse. Trump knows he has deep connections within the Senate, and his friends in the chamber won’t push him in danger if something goes against the planning. The killing of the January 6 commission by the GOP Senators is a classic example in this regard.

Ending the filibuster to make Trump accountable is the only way Democrats can handle Trump conspiracy theories before the water goes above their heads.