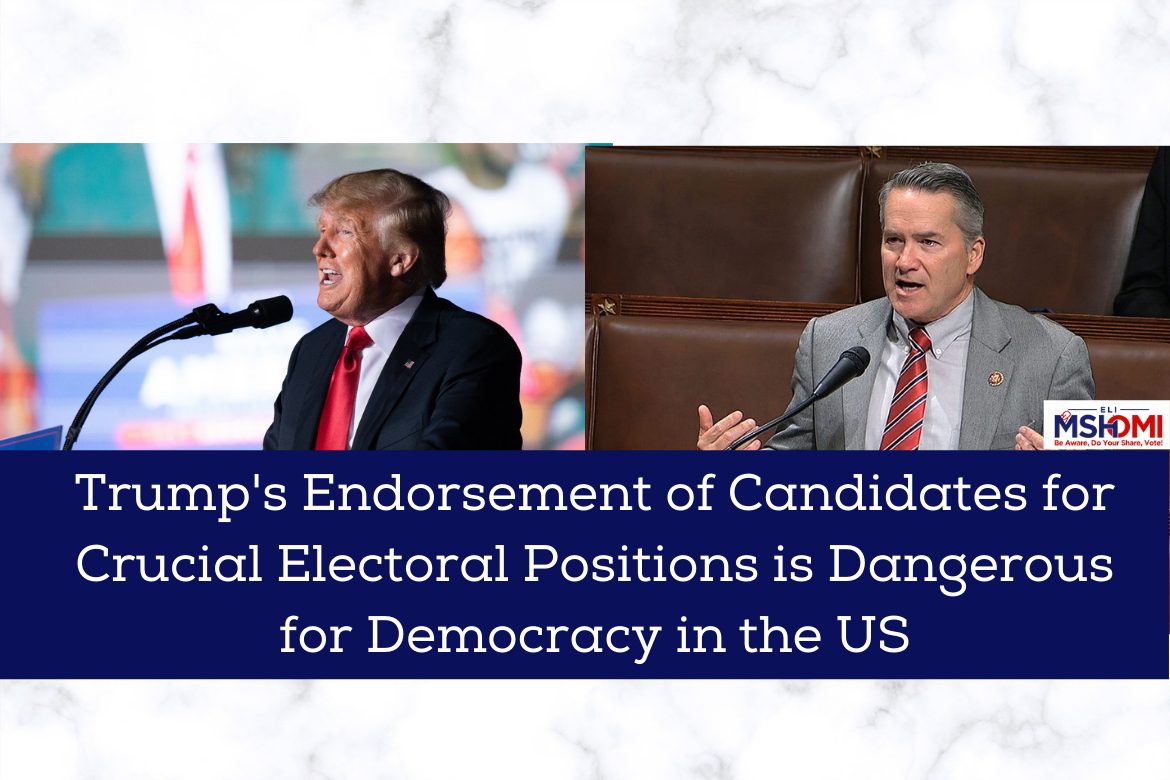 The former President Donald Trump is once again on a roll to elevate the tickets of Republicans who sided with him in perpetuating his election conspiracy theories.

His allies, who sought to undermine democracy in the USA, are enjoying the benefits they expected.

As various states in the country are looking for secretaries of state and election officials, Trump’s endorsements of candidates are coming at a crucial time. He is supporting the candidates for the positions that are crucial in the decision-making and administrative aspects of elections.

Election of Pro-Trump Ideology is Detrimental to US Electoral System

In states like Nevada, Wisconsin, Arizona, Michigan, and Georgia, ten out of fifteen candidates competing for these seats are backed by former President Donald Trump and supported his post-2020 election efforts.

If the candidates who backed Trump’s efforts win these important seats in different states, they can introduce a series of laws to catalyze voter suppression in their respective states.

The primary reason why Trump’s conspiracy theories were busted in the post-election season was the presence of the secretaries of states who did not align with his vision.

While all Democrats defied these efforts, some Republican secretaries also declined to bandwagon with Trump’s narrative. This made his efforts useless at the end of the day.

Now, if his promoted candidates manage to win the influential seats, it will help Trump in institutionalizing his voter fraud efforts.

And Trump has a dual motive to elevate these candidates. First, he is promoting them because they became his mouthpiece, and secondly, he has to replace those officials who denied entertaining his baseless claims.

The situation is already concerning many experts who believe that these efforts are specifically intended to spread voter fraud theories in the country. Experts believe that this is the attempt of Trump to hijack the US electoral system by installing those anti-Democratic voices at crucial positions.

Trump is successfully gauging Republican supporters’ minds who are still skeptical about the transparency of the election results. This is the reason why almost 78 percent of Republicans still believe that Trump was robbed of votes during the latest poll.

Jody Hice, the in-service Congressman who is running for Georgia Secretary of State, is one such candidate who enjoys the support of the former president. And Hice knows the importance of this endorsement very well.

This is the reason why he explicitly mentioned on his campaign website that Donald Trump supports him. Hice also vows to reform the electoral process after assuming the powerful office. His mantra of election fraud echoed in the state of Georgia, helping Trump to further his agenda.

Similarly, Trump has also backed up Mark Finchem, another pro-Trump Republican serving in the Arizona State Hosue. This “true warrior” of Trump was located at Capitol Hill when the building was invaded on January 6.

He was also the vocal advocate of the Maricopa county vote audit, which failed to bring any substantial irregularity in the state of Arizona. Although this failed audit did not bring any tangible result, however, it helped Finchem earning the title of “true warrior” of Trump.

The same is the case with Kristina Karamo, a Michigan poll watcher who watered Trump’s stories and successfully won his endorsement. The overall strategy of Trump is alarming to influence the country through structural means.

No one can stop Trump from endorsing any candidate legally, and Trump knows this fact very well. This has enabled him to back candidates of his choosing to exercise the massive influence he has within the political sphere of the country.

Whether this suppression comes in the form of strict voting legislation or disenfranchising some people based on their political ideology will only be clear once these Trump’s backed candidates capture their envisioned seats.