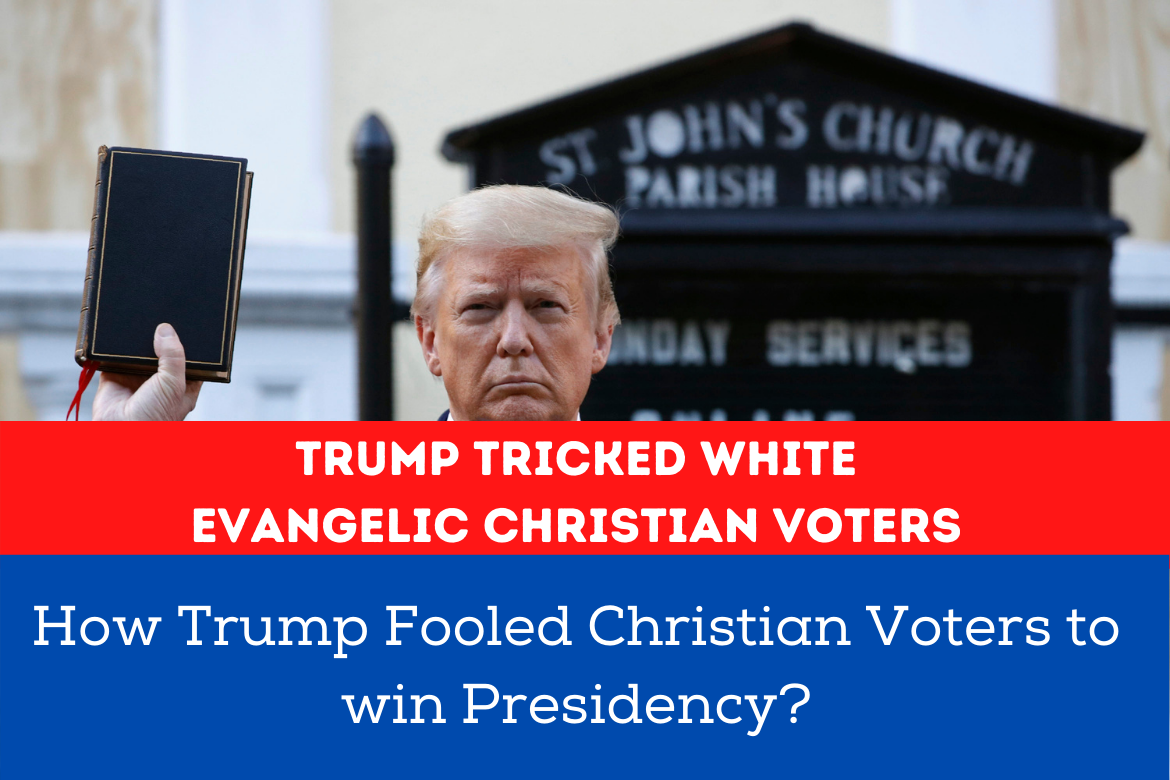 “But if the church loses its integrity and therefore its witness, then the culture around it will suffer. Indeed, for the Church Remnant, the evangelical embrace of the president has advanced corrosive values in the culture—giving encouragement to narcissism and materialism, greed and lust, racism and sexism—that are just as damaging if not more so than misbegotten policies.” – Timothy Dalrymple, CEO Christianity Today

The presidential elections are over as Donald Trump has failed to win another term of the presidency. Several factors contributed to the defeat of Donald Trump, ranging from his attitude toward the people of the United States to his policies for the country; nothing worked for him.

In the 2016 presidential race, most white evangelic Christian voters voted for Donald Trump. Surveys suggest that around 61 percent of the Evangelic voters preferred Donald Trump to Hilary Clinton in 2016.

Religious figures such as Robert Jeffress spent hours lecturing their followers to vote for Donald Trump. He even defended him against the accusations that he faced during his presidency.

This tremendous evangelic support was even astonishing for the socialists of religion. These white evangelic Christian voters were motivated to vote for Donald Trump based on moral convictions on issues such as abortion, same-sex marriage, and prejudice about the deterioration of traditional values.

Such issues and their equivalents have never been a central feature of Trump’s life or even his politics.

Therefore, the study of why evangelic Christians voted for Donald Trump demands more in-depth analysis; studying psychological approaches to understand the factors that fooled the white evangelic Christian voters is also necessary for this regard.

In this article, we will explore the reasons for Trump fooling the white evangelic Christian voters.

We will be analyzing different factors that may have played a role in the matter and will be taking some help from psychology to provide our readers with a better understanding of the topic. How Trump Motivated White Evangelic Christian Voters to Support Him?

White evangelic Christian voters are one of the largest religious groups in the United States. President Trump always wanted to get the support of this large group. For the evangelic voters, Trump was a symbol of everything that they stood for in 2016.

Witnessing this huge support of evangelic voters for a man whose whole life was built on lies and moral bankruptcy, Stephen Mansfield decided to write a book. The book explores the factors that have played their due role in gathering the support of this majority religious group for President Trump.

Mansfield argued in his book that the evangelic Christians knew that Trump was not the right man but still supported him because they were wary of progressive development in the Obama era.

They wanted to provide evangelic support to a candidate that could deliver on crucial issues such as handing over the Supreme Court to pro-life justices.

Many religious leaders, including Franklin Graham, believed that Trump was appointed by God and had the backing of Jesus Christ. They think that Trump is a “chosen one” to get the United States out of the darkness that they believe to have surrounded the whole country.

For most of the evangelic Christians, abortion seems to be the only main issue of the United States. They believe that they need someone to overturn Roe v. Wade from the Supreme Court.

For those who may not know, Roe v. Woe is a landmark decision of the Supreme Court that grants every woman the liberty to have an abortion without any restriction from the government.

The majority of the evangelic Christians believe that if this decision was overturned, then the abortion will magically fade away as if it was never there.

Donald Trump failed to get this in his first term. He promised that he would inject the Supreme Court with a conservative pro-life majority if given another chance so that the decision can be nullified.

Many women who use abortion are hopeless and had no other choice. It means that the real reason behind the problem is the lack of resources, education, and opportunities. So, it would be more appropriate to provide these things instead of overturning the decision to counter the emerging problem of abortion in the United States.

Coming back to Mansfield, he also suggested that evangelic Christians believed that they were traumatized by the progressive policies of Barack Obama. Obama was seen as pro-abortion, pro-same-sex marriages, and pro-LGBT, which most religious leaders, especially conservatives, despise.

These religious leaders believed that they were being attacked by the Obama administration. They had the notion that if they failed to get the Democrats out of office, they would be extinct. It was a game of survival for them, and Trump knew it and presented himself as a savior.

Moving on, many of the GOP candidates and elected officials were far more religious with deeper evangelic roots as compared to President Trump.

Additionally, some of the religious leaders among evangelic Christians saw Trump as the ordained one. Others simply supported him to get access to the highest office in the country.

Moreover, their hatred towards progressive Democrats also urged them to place their bets on a man that would later destroy the country. They were reacting to what they saw in Obama and anticipated it would be carried on by Hilary Clinton.

Gradually, these religious leaders took ownership of Trump, along with his behavior and mistakes. They were answerable to their followers for the actions committed by the person that they chose to follow.

This was a mistake, the price of which is being paid by the church. Youngsters across the country are now horrified of Trump and his owners, who are the leaders of white evangelic ministries.

In the United States, religion and politics have maintained a boundary for centuries. Like many other lines, Trump crossed this line too and used it for personal gain, and, in the end, left it helpless. What does psychology say about white evangelic Christian voters’ support of Trump?

Many times, Trump made mistakes that were termed as political suicide by the analysts. However, every time, he got away with them.

It appears that President Trump is bulletproof as he manages to attract support from different groups despite his inexplicable behavior and rhetoric.

Trump brought the country to the verge of destruction but still managed to give tough competition to President-elect Joe Biden in the presidential race.

Many experts on political science have failed to justify this, but there is a psychological explanation for this. We will try to provide our readers with this psychological analysis while analyzing Trump’s attempt to attract the evangelic voters.

The Dunning-Kruger effect suggests that Trump supporters support him out of ignorance. They believe in everything that President Trump tells them.

It is as if they are under a spell and illusion, telling them that they are on the right path. Evangelic Christians do not believe everything that Trump tells them, but they do believe in the explanation provided by their leaders.

Secondly, psychology has proven that conservative minds often show an exaggerated fear response to stimuli that they perceive as threatening.

This explains the evangelic support of Trump as a game of survival. They feared they would be destroyed if the Democrats continue to rule the country.

Additionally, Trump used this factor with his fear-mongering by portraying Muslims and Mexican immigrants as dangerous and lethal for the country. He used this to keep his followers energized and focused on their safety, and they forget about everything else.

Terror management theory provides a better explanation of Trump’s fear-mongering. The theory explains the existential crisis and how it drives a man to commit certain actions, to shift his ideology, or to take steps.

The existential crisis not only increases nationalism but also affects the voting habits in favor of a more conservative candidate. Trump used the existential crisis to devise a psychological condition among his followers to respond pessimistically towards bigoted statements and divisive rhetoric.

Moving forward, a study monitored the brain activity of the participants while watching the 2016 presidential debates and political ads. The results showed that Donald Trump has a unique ability to capture the mind attention of the listeners.

He packs his speeches with emotions and astonishment. President Trump leaves the listener curious about what he is going to do or say next. He keeps his listeners entertained, and for this reason, many of his supporters may ignore anything that he says or does.

Some may support him for his rebellious and chaotic attitude. Trump keeps the emotion and attention levels aroused throughout his speech, and even when he makes remarks.

He uses foolish remarks deliberately to keep his listeners engaged and keep the focus of the news industry on him. He presents himself as an entertainment package, and that is what everyone needs nowadays. Donald Trump spent four years in the White House, but none of his actions or policies described him as a religious person.

Apart from his controversial photo of holding a Bible in front of St. John’s Episcopal Church, there is nothing that classifies him as a devoted Christian.

Astonishingly, after all this, 76 percent of the white evangelic Christian voters’ support still lies with Donald Trump. Their support is far less than what he enjoyed in 2016. However, it is a considerable figure that proves the point that evangelic voters value something else than religion.

Trump promised to protect religious liberty while Joe Biden also did the same. However, it seems that Biden’s promise might not be on evangelic terms.

White evangelic Christian voters know that their power is declining, and they need to get someone in the White House that will help them flourish.

President Trump has repeatedly demonstrated his lack of familiarity with the Bible and basic Christian teaching. Yet his religious support does not seem to be minding this fact.

Astonishingly, only 12 percent of the white evangelic Christian voters see Trump as a very religious person. This attitude of the evangelic voters is explained by the Terror Management Theory above.

In 2018, President Trump signed an executive order establishing the White House Faith and Opportunity Initiative to remove barriers in the way of faith-based organizations. He did this to work freely and receive funding from the federal government.

Perhaps this is the only action that the evangelic leaders use to justify Trump’s stance on evangelicals. President-elect Joe Biden has proposed his plan for the safeguard of religious freedom.

But Biden’s plan to further push LGBT rights is the stimulus that urges the evangelic voters to vote for Trump.

Biden-Harris’s stance on progressive issues is driving the conservatives to find shelter under Donald Trump. They supported Trump while simply ignoring what he has done in his four years as the President of the United States.

They were ready to give him another chance, another four years to divide the country, but to do what they think is right.

Do not Miss: Trump Putting America on fire in his last days of Office.

Many majority groups played an important role in winning the Trump presidency in 2016. These groups ranged from white evangelists to wealthy business owners.

They helped Trump reach the White House to work for them instead of the ordinary citizens of this country.

Evangelic Christians are among the chief supporters of Donald Trump. They helped him not only with vote banks and financial support but also justified his ill-doings in front of Americans with their explanations.

The support that Donald Trump enjoys has deep underlying factors behind it, and none of these are in the interest of the ordinary American citizens.